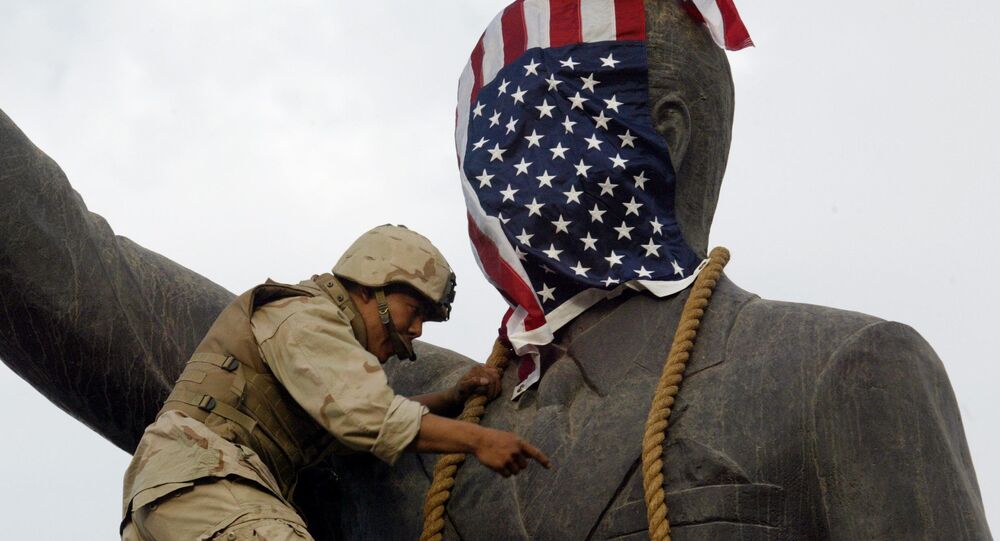 Although the US sought to deprive its geopolitical rivals of free access to Iraqi oil as one of the objectives of Operation Iraqi Freedom, China has managed to turn the challenges of the war to its own advantage, analysts told Sputnik, adding that Beijing may adopt a similar strategy towards Syria.

Washington's plans to commandeer Baghdad's oil exports in the aftermath of its 2003 invasion Operation Iraqi Freedom failed, as China has emerged as the largest purchaser of Iraqi crude.

"The Chinese are conducting a quiet economic expansion in Iraq and many other countries, particularly in Africa and the Middle East," Igor Shatrov, deputy director of the National Institute of Modern Ideology Development, told Sputnik China. "China's influence in the world is increasing with no muscle-flexing [on the part of Beijing] and the US cannot do anything about it, because Western companies can't offer the same favorable conditions Chinese companies provide [to their customers]."

Additionally, Beijing does not interfere in Iraq's domestic affairs and does not try to drive a wedge between Baghdad and Iraqi Kurdistan, the scholar emphasized.

"Beijing pursues solely economic interests," Shatrov explained. "This is probably the main explanation for why Chinese oil companies are smoothly entering other countries. They offer favorable conditions and do not focus on larger profits. This suits their partners, including the Iraqis."

© AP Photo / Lefteris Pitarakis
US 2003 Invasion of Iraq Led to Nothing But Chaos and Instability – Observers
Exactly 15 years ago the US launched its Operation Iraqi Freedom, seeking to maintain control over Iraqi oil fields. Washington planned to deprive its major competitors, particularly China, of free access to the region's energy resources.

However, the US plan has proven inefficient: Over the last several years, China has become the leading importer of Iraqi crude, buying more than half of all oil produced in the country. Virtually all major Chinese companies are engaged in oil extraction in the region.

"[President] Bush made a gross mistake, a major strategic mistake," Zhang stressed. "[US] Armed Forces invaded Iraq without the UN Security Council's resolution, it was inacceptable. Now many American strategists and even then-Bush's associates like British Prime Minister Tony Blaire admit that it was a blunder."

The former Chinese diplomat recalled that the invasion was launched under a false claim that Iraqi leader Saddam Hussein was secretly developing weapons of mass destruction. The devastating results of the US military campaign should serve as a reminder that the rules of international law must be upheld, Zhang pointed out.

Three Challenges of War in Iraq

Nevertheless, Beijing managed to turn the challenges of the US war in Iraq to its own advantage as well as to the advantage of Baghdad, Ji Kaiyun, a researcher at the Center for Iranian Studies at the Chinese Southwest University, underscored.

© AP Photo / Jerome Delay, File
US Remains 'Official Sponsor of Terrorism in Iraq and Elsewhere' – Politician
"The war in Iraq posed three major challenges to China," Ji noted. "First, the security situation in Iraq worsened and Chinese enterprises and Chinese investments in the Iraqi energy sector faced serious obstacles. Second, the agreements and contracts concluded by China and Iraq [under Saddam Hussein] could not be executed. Third, after the war, new obstacles emerged in the way of China in Iraq as it had to fulfill its obligations as a global power."

However, China stepped in and lent its helping hand to the Iraqi government, assisting Baghdad in the restoration of the country's infrastructure and investing in the country's economy. Furthermore, Beijing freed the country from some of its debts and postponed the servicing of the others.

"China's import of Iraqi oil is the country's friendly gesture to Iraq," Ji opined. "It allows Iraq to obtain [foreign] currency and funds necessary to ensure the independence and unity of the country and improve the living standards of the population."

Sino-Iraqi Relations are Based on Economic Pragmatism

According to Boris Dolgov, senior researcher at the Russian Academy of Sciences' Center for Arab and Islamic Studies, China's pragmatic foreign policy in the region helps it counter the US bid for unparalleled dominance.

One of the results of this policy is a successful development of Sino-Iraqi relations and China's expansion in the region, he pointed out.

"Relations between Beijing and Baghdad are based on economic pragmatism. [China] participates in the development of the oil industry in Iraq, promotes its investments, as well as financial and political interests. This policy brings success for China. The US cannot in any way prevent the growth of [Beijing's] influence in the region, although [the Americans] are trying to solidify their presence in the [Middle East] with the use of force."

© AFP 2021 / Martyn Hayhow
The Iraq War 15 Years On: No Body Count, No Accountability, No End in Sight
The observers presume that Beijing may adopt a similar strategy in war-torn Syria. Despite high political and military risks, China could occupy its own niche in the Syrian market.

Fifteen years ago, China, Russia, India and a number of other countries advocated the diplomatic resolution of the Iraqi issue. However, the US-led coalition invaded the country with a force of about 280,000 servicemen. There are conflicting reports on Iraq's total losses in the war — from 100,000 to 300,000 people, including civilians. According to the World Health Organization (WHO), between 2003 and 2006 alone, military clashes in the region claimed the lives of 150,000 to 223,000 Iraqis.