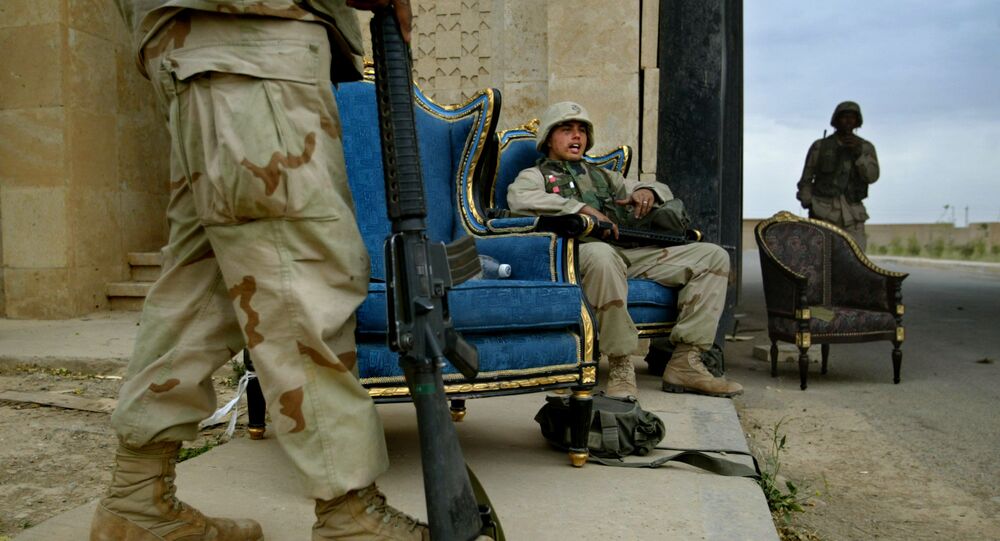 The US invasion of Iraq in 2003 undermined the region and plunged it into instability, Turkish political observers told Sputnik, commenting on the 15th anniversary of the US-led Operation Iraqi Freedom. The observers drew parallels between Washington's Iraqi campaign and its attempts to attack Syria under the pretext of the use of chemical arms.

Exactly 15 years ago the US-led coalition launched Operation Iraqi Freedom, seeking to disarm Baghdad of supposed weapons of mass destruction (WMD) and thwart Saddam Hussein's alleged support for al-Qaeda, which resulted in the destabilization of the region and an upsurge in terrorism, Turkish analysts recall in an interview with Sputnik Turkey.

"As you know, there was no corresponding resolution of the UN Security Council," said Ozturk Yilmaz, the Turkish opposition Republican People's Party (CHP) deputy chair responsible for foreign relations. "The US claimed that there were chemical weapons in Iraq, but it was nowhere to be found, as well as al-Qaeda terrorists which appeared in the country only after Saddam's ouster."

Yilmaz underscored that the US illegal invasion of Iraq dealt a heavy blow to the state's territorial integrity.

"Today Iraq cannot be called an integral state with a unified and stable-working system of government," the politician pointed out. "Although the territorial integrity is formally maintained in the country, it is being torn by serious conflicts. After the US invasion of Iraq, the country became divided along ethnic and religious lines, a civil war began in the state claiming the lives of nearly one million people and millions more were forced out of the country."

© AFP 2020 / Martyn Hayhow
The Iraq War 15 Years On: No Body Count, No Accountability, No End in Sight
He stressed that the US invasion of Iraq plunged the region into instability and chaos, exacerbating the Sunni-Shiite and ethnic divisions.

"If one takes a look at the 15 years since [the US invasion], one would see that the order in Iraq has never been ensured while chaos and instability only increased. Millions of people in Iraq have fallen victim [to the US operation] and suffered damage. The country has wallowed in ethnic and religious confrontation. The Americans stated that their main objective was to bring democracy to Iraq, but where is it? There is nothing but chaos and ruins. And so it happens in every country they have intervened in."

According to the Turkish politician, the American strategy means creating a problem where it does not exist in order to interfere in the other states affairs under the pretext of its solution and further aggravate the situation.

Akcay drew parallels between the US' Iraqi operation and the current situation in Syria, slamming Washington for providing weapons to the Kurdish Democratic Union Party (PYD) regarded as an affiliate of the Kurdistan Workers' Party (PKK), outlawed in Turkey.

For his part, Esin Onulduran, a Turkish academic specializing on Middle Eastern affairs, highlighted that the US invasion of Iraq facilitated the emergence of Daesh (ISIS/ISIL)*, formerly known as al-Qaeda in Iraq*.

"Currently, Iraq is undergoing a period when its territorial integrity is being put under threat," Onulduran told Sputnik. "Over the past 15 years hundreds of thousands of people have been killed. Today an atmosphere of chaos is dominant in Iraq."

He highlighted that the US' pretext for the invasion turned out to be fake: "The head of the US State Department demonstrated photographs of vehicles and infrastructural objects at the UN Security Council, claiming that chemical weapons were produced and stored there. That was not confirmed. Moreover, it later turned out that one of the facilities shown by the Americans was actually a factory which produced baby food."

Hasan Bitmez, the deputy head of the opposition Turkish Saadet Party (Felicity Party), said that the US military operation in Iraq dealt a heavy blow to the very idea of humanity.

"The forces that pledged to bring democracy and human rights to Iraq, in fact, deprived the Iraqi people of all rights," Bitmez emphasized. "The US invasion laid the bomb of destabilization under the region's foundations, and predetermined the emergence of today's problems. The forces which are complaining about the terrorist threat and insecurity are, in fact, the architects of the situation and should bear responsibility for it."

© AP Photo / Jerome Delay, File
US Remains 'Official Sponsor of Terrorism in Iraq and Elsewhere' – Politician
The politician drew attention to the fact that the US is trying to use the same chemical weapons pretext in Syria in order to attack and occupy the territory of the sovereign state.

According to Bitmez, Iraq and Syria remains the focus of attention of Western forces interested in the implementation of the "Greater Middle East" project.

"Using [WMD] pretexts America gets the opportunity to attack and occupy territories of other states," the politician noted, adding that judging by the Iraqi case, sooner or later these scenarios turn out to be a hoax.

Bitmez highlighted that one must realize that any state that is pursuing an independent foreign policy could become a potential US target, including Turkey.

The US invasion of Iraq started on March 20, 2003 and was preceded by the 9/11 tragedy in the US. The military mission consisted of 21 days of combat operations, carried out by the US-led coalition. As a result, the Baathist government of Saddam Hussein was overthrown. On May 1, 2003 then President George W. Bush announced the end of the Operation Iraqi Freedom, which was followed by an eight year-long military occupation, during which the coalition and allied Iraqi forces faced resistance from Iraqi militant insurgency.

*Daesh (ISIS/ISIL) and al-Qaeda are terrorist groups banned in Russia.