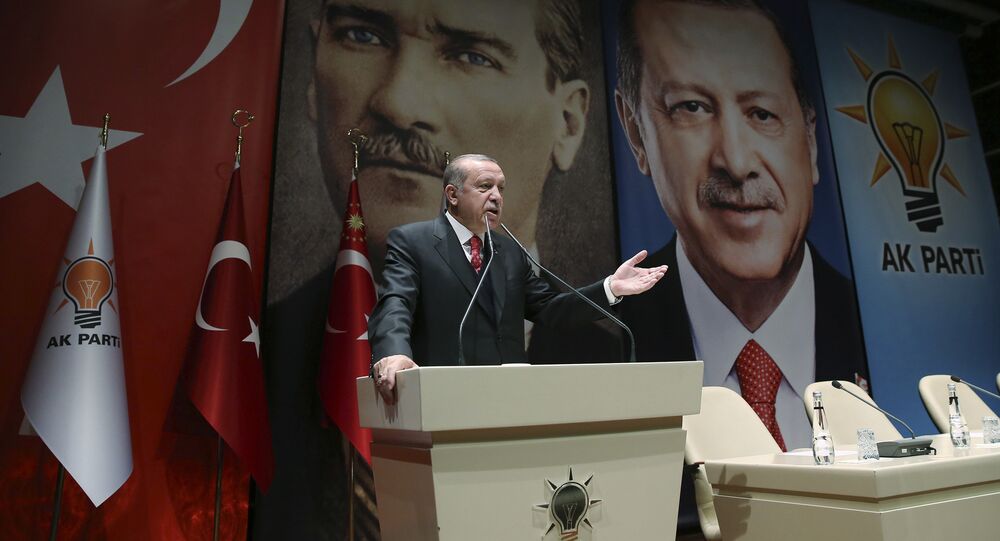 Erdogan Courts Iran to Stand Against Possible US Provocation – Professor

Turkey’s President Recep Tayyip Erdogan has claimed that the US military bases in Syria could lead to a third world war, calling Washington out for challenging Ankara and Teheran. Sputnik talked to Turkish political scientists about what is behind Erdogan’s claims.

Political Science Professor from Atalym University Hasan Ünal thinks that Ankara is discontent with the US policy of threatening with “Iranian complications,” signaling that it is not going to follow Washington’s lead.

“Opening military bases in Syria by the US are signs of the American long-term plans to tear the Syrian territory apart. The US says with these actions that ‘We are increasing our presence to balance Iran’s growing role in the region. We have no other means to shadow Iran’s influence in the Middle East, that’s why we are staying here with the Kurdish Democratic Union Party’.The US tries to influence Turkey, using Iran as a threat. But Erdogan’s announcements show that he’s discontent with such US policies and is not going to listen to Washington’s warnings,“ Ünal told Sputnik.

He also pointed out that Iran is going to appreciate Erdogan’s pronouncements, saying “Questions arise, as there are no direct contacts between Turkey and Syria. Like Iran, Russia sometimes has difficulties because of the situation. There’s an understanding, however, that if Iranian-Turkish and Russian-Turkish relations get worse because of Turkey’s refusal to accept Bashar al-Assad as the official head of state, more turmoil is yet to come. That is why Iran and Russia are trying to solve questions, playing mediators between Syria and Turkey. And I assume the Iranians appreciate Erdogan’s warnings.”

At the same time, the professor claimed, with close cooperation between Middle Eastern countries, the US attempts will fail.According to him, the US can have military strongholds in Syria, but the story is a repeat of the situation in Iraqi Kurdistan, where the Americans colluded with former autonomy leader Masoud Barzani. They used the fact that there were no barriers to providing heavy arms. However, the outcome was not in Barzani’s favor, as he lost everything after Russia and Iran spoke against the decision to hold an independence referendum. Ünal predicted the same scenario for US cooperation with the Kurdish Democratic Union Party.

READ MORE: US Remains 'Official Sponsor of Terrorism in Iraq and Elsewhere' – Politician

Flirting With Iran Over “Olive branch”

According to analyst Faik Bulut, who specializes in Middle East studies, Erdogan’s announcements that “not only Turkey is in danger, because there are both the Kurds and the USA in the region” look like an attempt to allure Iran to its side, or at least to make sure that Teheran will retain its reserved position towards Turkey’s military operation in Afrin.

“Iran doesn’t endorse the Turkish military activities in Syria. That’s why it’s possible that Erdogan’s claims are to draw Iran to its side, or at least to ensure Teheran’s reserved reaction to operation ’Olive branch‘,” Bulut told Sputnik.

He also pointed out the possibility that Saudi Arabia, Israel and the USA are working on besieging Iran and conducting a military operation against it, which has been discussed for some time. Now that [former CIA chief] Mike Pompeo has stepped in as the Secretary of State this question will become even more relevant.

“If we look at the Turkish president’s announcements in this light, we can guess that Erdogan is suggesting that Iran and Turkey join their forces and stand up together against a possible US provocation,” he told Sputnik.

The views and opinions expressed by the experts are those of the speakers and do not necessarily reflect those of Sputnik.