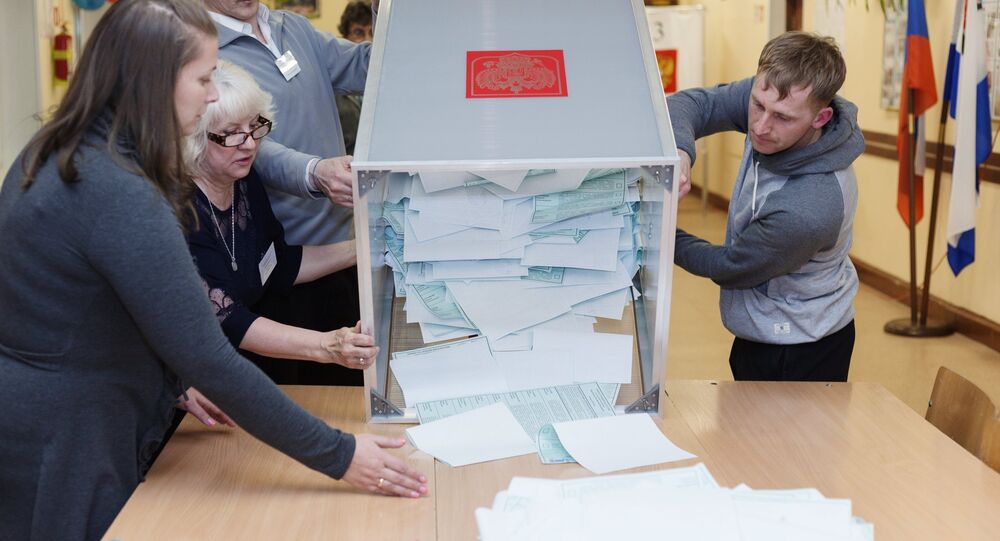 Russians have elected Putin for another six years as the country's President. According to preliminary results, Putin is leading with over 75 percent of the vote, while the election turnout was over 63 percent. Sputnik spoke to Lode Vanoost, a political analyst and former deputy speaker of the Belgian parliament, as Russians took to the polls.

Lode Vanoost: Apart from the result that probably President Putin is going to renew his mandate, the most important thing is how many people actually went to vote, if it is 62 percent, let's compare it, for example, with participation in the Unites States, where it was much lower and nobody in the mainstream media yet discusses the legitimacy of the election there. Therefore, [given] that number, these are very legitimate elections indeed.

Sputnik: Tell us: how did the Western press cover the Russian elections?

© CC BY-SA 2.5 / Asiir / Embassy of Russia in Washington DC. Russia
Election Commission: 1,400 Russians Voted at Embassy in Washington DC
Lode Vanoost: If I see anything to do with Russia in the mainstream media, not just the elections, here in Western countries, it has become so biased that I do not expect any fair review of the election process in the coming days. The climate has been so poisoned by what I personally call anti-Russian racist ideas, apart from the criticism that one can have of the Russian political system and of its political leaders, which is another debate. So I do not believe that there will be a decent review of the elections, so whatever the result is going to be, they are going to take it down as something that is not correct. But then again, when you [ask], "are the elections in Russia fair"… well, I always say, 'compared to what?'

First of all, you have to distinguish between the technical process of the elections: you know — how are the ballots organized, how is the counting process going on, how's voter registration. On that level one can dispute that in Russia they have a decent system to organize elections. Of course, elections are more than just the technical system, [there's] also a political level, and one of the things that the media here emphasize is that the opposition candidates do not have fair accesses to the media, which for me is a bit odd, considering that several of these opposition candidates are quite well-known figures in the Russian media. So I'm not going to say that the big media in Russia are very fair or balanced, but again, compared to what? Compared to the American media, the British media, the French media, how fair and balanced are they towards opposition candidates? So I'm not going to say it's very good there and it's very bad here, things are much more complex than that, but I do not think it is correct to point the finger at Russia for being unfair on an issue where European countries and the United States do not have a lot to show for.

Sputnik: Can you give us some forecast regarding relations between Russia and the European Union during the next presidential term?

© Sputnik / Vladimir Pesnya
Russian FM: Turnout in Presidential Election Abroad 'Unprecedented'
Lode Vanoost: What I give is an educated guess; [it's] based on information but it's still a guess. My feeling is that it's not going to get better, these relations. Are they going to get worse? Well, actually, I don't think so, it's going to remain the same as it is nowadays, because this anti-Russian atmosphere is too easy for those in power [to use] to cover up the other issues like austerity and so on: in Great Britain, for example, the whole debacle with Brexit and so on, so I think it's going to go on. My big worry is that in a situation like that, things can escalate very fast, even without the intention of an escalation, this can get out of hand very fast, and that is my biggest worry. I do not believe that even NATO is planning something of a war or an attack on Russia, but what I do believe is that the situation is getting so tense that things could get out of hand and that is my biggest worry for the coming years.

Sputnik: What conditions could bring about a thaw in relations between Moscow and Brussels?

© Sputnik / Vitaly Ankov
Russian Election: 'Reaction of Int'l Community to Be Shaped by MSM' - Analyst
Lode Vanoost: [First] we have to make an analysis of the political process in the EU itself, of what is going on here, before we can even start to tackle the relations with Russia. Things are so complicated and complex that I cannot foresee the specific conditions. Basically, one will have to wait until the European elections, that is, the elections for the European parliament in June next year. Euroscepticism is growing among the people in the EU, so it all will depend on how people will vote in those new elections or not vote, because in some EU countries, participation in EU voting is lower than 15 percent. So that is extremely worrying, and in those circumstances parties can get elected with a very dangerous program, not just towards Russia, but towards the democracy in the EU itself. So basically when you [ask] how to resolve the relationship with Russia, well it is asking the same question on how to resolve the problems within the EU itself.