Talk about a possible boycott by England of the 2018 World Cup to be held in Russia is getting louder. What will FIFA do if this scenario is actually implemented?

The poisoning of former spy Sergei Skripal has eclipsed everything football related over the past few days. At first, British Foreign Secretary Boris Johnson threatened Russia with a boycott of the World Cup and the following day Prime Minister Theresa May also stressed that boycott may be considered as one of the possible measures against Russia.

However, by announcing a boycott of the biggest football event, the British will only harm themselves: the fans will be deprived of the event, the players will miss out on a hard earned trip and a chance to win the trophy, and the national team can also be disqualified in the subsequent tournament to be held in Qatar in 2022.

In case of a boycott, the British will violate the FIFA rule, according to which all teams participating in the tournament are obliged to hold all the matches while they continue to take part in the World Cup.

© REUTERS / Dylan Martinez
FIFA, Twitter 'In Panic' as English Team May Boycott 2018 World Cup
In the case of a boycott by England, FIFA will most likely send an invitation to another team, although it may leave three teams in Group G — Belgium, Panama and Tunisia. There was a similar precedent in the World Cup of 1950 in Brazil.

India and France refused to participate in the tournament due to huge expenses for the long flight, but back then there was too little time to organize replacements, and it was more difficult to contact the candidates.

In 1992, just ten days before the start of the UEFA European Football Championship, Yugoslavia was excluded from the list of participants, due to the tense situation in the country at the time. Denmark took its place.

Denmark had finished second in the qualifying group with the Balkans, so they were offered the replacement position. To everyone’s great surprise, the Danes won the championship.

The history of 1992 proves that no team will refuse a major tournament if it is offered such a privilege, not three months before the start and not even ten days before the start. The only question is, who can FIFA choose this time? 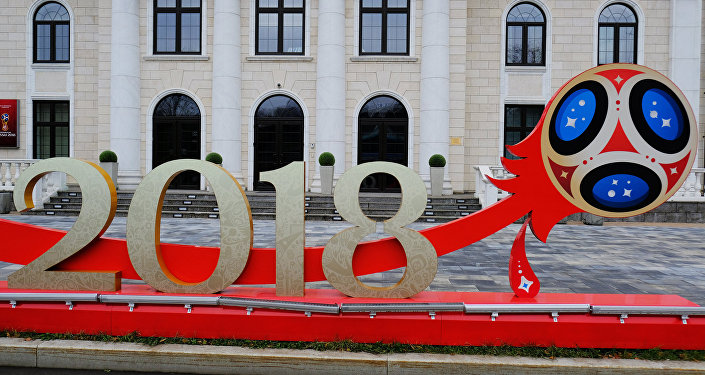 © Sputnik / Natalia Seliverstova
Over 1.3 Million Tickets Sold for 2018 World Cup in Russia - FIFA
Slovakia’s national team was in the qualifying group with the English, so it can count on a proposal from FIFA. The Slovaks were unlucky, as they finished after England but did not get into the play-offs.

Chile was the finalist of last year's Cup of Confederations but currently sits at the 10th place in the FIFA ranking. However, the South Americans do not represent the European confederation, and that certainly will become an obstacle as the balance of representatives of the continents should not be violated.

Italy, the four-time world champions, did not qualify for this year’s World Cup. Their failure was mourned by half the planet. It is still difficult to believe that Italy will not come to Russia, but a British boycott may fix the situation.

Today, the Italians hold 14th spot in the FIFA rating, the highest among the European teams that did not qualify for the 2018 World Cup.

Formally, the closest teams qualifying for the World Cup among the European teams were the four that lost in the play-offs — Italy, Ireland, Northern Ireland and Greece.  It could be possible to arrange a mini-tournament for the selection of a winner among these four teams.

Calling on its Allies

As reported by the publication The Times, England is calling on its allies Australia, Poland and Japan to boycott the championship as well.

As fourth place in the qualifying group of the Asian Cup Qualification (AFC) does not entitle to anything, the players from the Emirates will be given special honor.

In the case of Poland the situation is even more complex. If one were to imagine Italy taking the place of England, Poland will be replaced by Wales or Holland. But in case Wales won’t be allowed to play, thus the road will open for the Dutch to shine.

So, even on paper, the redistribution of teams at the World Cup looks quite problematic, but in reality everything will be much more difficult.

Not to mention the fact that fans and footballers from England, Poland, Japan and Australia will oppose the decisions of their leaders.

Many fans will have to return their tickets, which is, by the way, possible to do on the official FIFA website. During the last stage of the sales, 15,906 tickets were distributed among Australians, 14,890 among the British and 13,686 among the Poles.

It is highly unlikely that these fans will be delighted by a boycott.