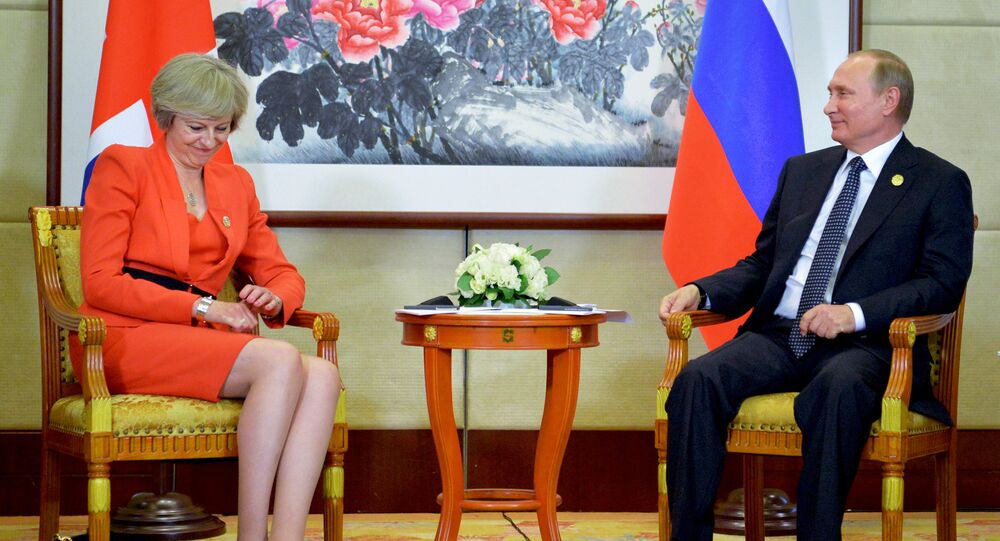 The UK PM appears remarkably assertive that it's "highly likely Russia was responsible" and that "the Russian state was culpable for the attempted murder" of ex-Russian spy Sergei Skripal and his daughter. But then again, the UK government was also confident to back the Iraq invasion over the alleged threat posed by weapons of mass destruction.

Addressing the House of Commons on March 12, Theresa May outlined the government's position on the incident that took place in the southern English city of Salisbury, when Skripal and his daughter Yulia were struck down by a nerve toxin on March 4.

"A reckless and despicable act": PM's statement to Parliament on the use of a nerve agent in Salisbury. https://t.co/mYtcjCjUPQ

Mrs. May named the nerve agent — "Novichok" ("Newcomer" in Russian).

She said with conviction that "Russia has previously produced this agent and would still be capable of doing so."

She "concluded that it is highly likely that Russia was responsible for the act against Sergei and Yulia Skripal."

Members of the parliament nodded in approval, with some stressing that British national security was at "significant risk if we were led by anyone who did not understand the gravity of the threat which Russia poses."

In response to her strong and welcome statement on Russia, I urged the PM to consider calling for a collective response from our NATO allies pic.twitter.com/WKEDLZKWh1

So far, this presents an unsurprising scenario of anti-Russia rhetoric, comfortable for the British political apparatus. There have been years of strained Russia-British relations and there is also what appears to be a habit of jumping to conclusions in blatant disregard for concrete evidence.

Novichok applies to the name of a group of nerve agents that were developed in the Soviet Union in the 1970-80s. In 1993, Russia became a signatory to the Convention on the Prohibition of the Development, Production, Stockpiling and Use of Chemical Weapons and on their Destruction and in 1997 it ratified the document that stipulates the complete destruction of the weapons.

Interestingly, one of the former Soviet Union's largest chemical weapons testing facilities was located in Nukus, Uzbekistan. According to a 1999 New York Times article, it was none other than the US Department of Defense that was involved in dismantling the Nukus plant, which was a "major research and testing site for a new class of secret, highly lethal chemical weapons called 'Novichok.'"

Keeping that in mind and the fact that the Novichok formula is not a Russian state secret, several arguments are as "highly likely" as that of Theresa May.

First, even if the toxin used to poison Skripal was developed in Russia, it doesn't mean it stayed in Russia. As a "binary agent," Novichok could be stored as two less toxic chemicals and can thus easily be transported, becoming toxic only when mixed.

My suggested PQ: "Can the Minister confirm that the phrase "of a type developed by Russia" does indeed mean that Porton Down have positively identified the Salisbury nerve agent as synthesised, made, manufactured or produced in Russia?" Please RT. https://t.co/Q8Y8NiMVLG

Second, the nerve agent can be easily developed in any other nation with means and access to chemical weapon laboratories.

What could make this even more plausible is that the alleged formula for the toxin has been described in a book titled "State Secrets: An Insider's Chronicle of the Russian Chemical Weapons Program" by Russian chemist Vil Mirzayanov, who defected to the US in the late 1990s.

"Therea May said that Novichok has been used in the assassination attempt on Skripal. Its chemical formula has been published only in my book."

The Porton Down chemical weapon laboratory of the British military, where the toxin in Skripal's case has been identified as Novichok, is located just a few miles from Salisbury. Under the "Chemical and Biological Weapons" subhead of Porton Down's description on the UK government's website, it reads:

Odd how the media haven't pointed out how close Salisbury, where the two Russians were attacked by a chemical, is to Porton Down, Britain's chemical warfare research centre? Once the chemical is identified, the Government need to confirm if any of it is kept at Porton Down. pic.twitter.com/TjnKvcSoYU

Considering no concrete evidence of Russia's involvement in the poisoning of Sergei Skripal has been presented by the British government, it is hardly a surprise that Moscow called May's claims a "circus show in the UK parliament."

Not Learning From Own Mistakes

Going back the questionable level of confidence presented by the phrase "highly likely" used by the UK PM to assign blame Russia, it may be edifying to recollect the British government's similar assurance of Iraq's capability to launch an attack using chemical and biological weapons within 45 minutes.

Iraq's Weapons of Mass Destruction: The Assessment of the British Government was published by the UK government, led by Tony Blair, in 2002.

The report described Iraq's alleged military prowess when it came to the use of chemical and biological weapons.

"Some of these weapons are deployable within 45 minutes of an order to use them."

The dossier noted that the UK Prime Minister has "consistently said, before and after 11 September, that the issue of Saddam's WMD needs urgent attention."

It only took 13 years for a British public inquiry into the UK's role in the Iraq War — the Chilcot Report — to determine that "the judgments about Iraq's capabilities… were presented with a certainty that was not justified."

Responding to the government's actions on the Skripal case, the leader of the opposition Jeremy Corbyn wrote in a Guardian article on March 15:

"There can and should be the basis for a common political response to this crime. But in my years in parliament I have seen clear thinking in an international crisis overwhelmed by emotion and hasty judgments too many times. Flawed intelligence and dodgy dossiers led to the calamity of the Iraq invasion. There was overwhelming bipartisan support for attacking Libya, but it proved to be wrong. A universal repugnance at the 9/11 attacks led to a war on Afghanistan that continues to this day, while terrorism has spread across the globe."

The dangers of unjustified certainty when it comes to statements by the UK government — especially bearing the potential to aggravate international instability — ought to be something Mrs. May should be on the lookout for. Sadly, this hasn't been the case so far, as the UK PM opted to expel 23 Russian diplomats from the country.

"They have just one week to leave," the UK PM concluded.