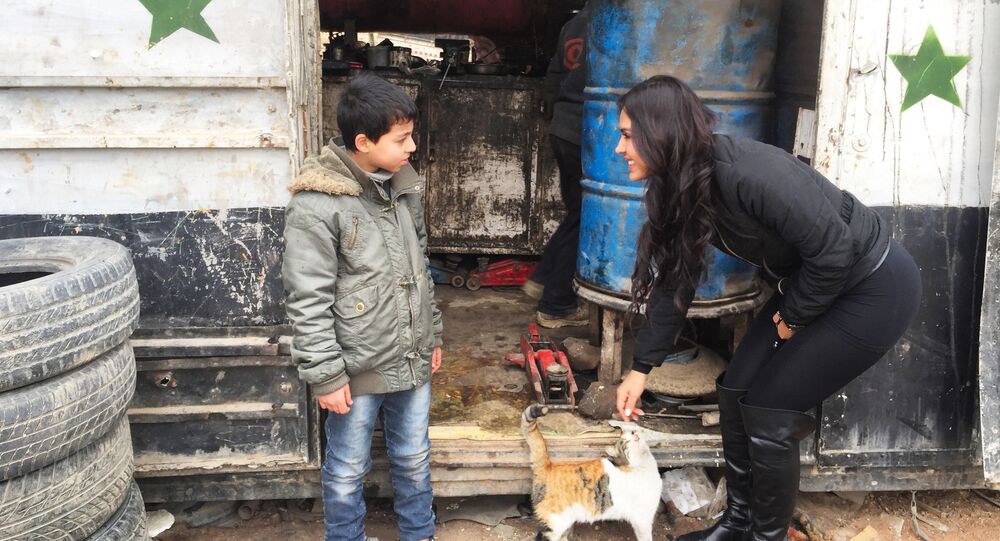 Bolivian actress, producer and activist, Carla Ortiz, spoke exclusively to Sputnik about her experiences on the ground in Syria – especially in Aleppo, during its liberation in late 2016 – and outlined how the current situation in east Ghouta is comparable.

Sputnik: What did you witness during your visit to Aleppo in late 2016?

Carla Ortiz: Every time I have given an interview, I have only spoke about the things that I have seen or testimonies that I have received first hand on the ground from Syrian people. When I was in Aleppo during the big battle in December 2016, I saw the most incredible faces of gratitude when the safe corridors (the first corridors were human corridors for the safe exit of civilians) were opened.

I saw them in the hundreds, exhausted and happy to be liberated from a territory that was dominated by tens of armed groups, including al-Nusra affiliates. Their testimonies were fresh as they were crossing without any agenda. They were not praising any side, but were just grateful to be free.

© Photo : Ali Hassan
Syrians in Postwar Aleppo Rejoice at Celebrating Christmas (PHOTOS)
I saw Christian women celebrating and uncovering their heads. Elders and children would share that most of the schools were closed and that they were deprived of food, medical aid and treatment by the militants. They said that many hospitals were only treating militants and that schools were used as bases for them.

I saw how the armed militants were put in green busses and were transported to Idlib. I also saw some fighters giving up their arms and joining the Syrian Army. Many of them claimed they were forced to fight with the terrorist groups. After some civilians were taken to shelters, they were joined by their family members who they hadn’t seen for four years.

It doesn’t matter what the MEDIA or OFFICIALS in the west said about #ALEPPO
I was there! I SAW IT! Aleppo did NOT fall, it was liberated!
Maybe in #Ghouta is HAPPENING the same!
Let’s truly PRAY for the end of TERROR & WAR in #Syria (Proof)👇🏼 pic.twitter.com/LSBaJT1UaO

Sputnik: How did the situation in east Aleppo change after the Syrian Army retook it in late 2016?

Carla Ortiz: If you saw Aleppo in December 2017 – a year after its liberation – you wouldn’t believe your eyes! They were finally able to celebrate Christmas, children were back in school and were finally rebuilding their lives! Is this about politics, or their president or their army? No, it is about normal humans wanting to live in a place that is safe and secure.

Almost a million people have gotten back to their homes in Aleppo and close to a thousand in the last month alone!

Why are we so reluctant to believe that they are better today than when the militants were there? Why is no one from our media going to Aleppo to see how it is after it “fell” to the Syrian Army? Why are we so afraid of telling the truth?

Syrians tell you, the ones doing the terrorist acts are mostly foreigners. Why can’t we believe them?

Sputnik: Do you think what is now happening in east Ghouta is similar to what happened in Aleppo in 2016?

Carla Ortiz: Well, I have seen the pamphlets that asked the civilians in Ghouta to go to the humanitarian corridors that were being opened. This is why I believe that the same protocol is happening there. We have been seeing some testimonies of the few that exited Ghouta and their stories sound very similar to the stories of those who left Aleppo in 2016.

© REUTERS / Bassam Khabieh
Over 300 Have Fled E Ghouta Via Humanitarian Corridor - Reconciliation Center
There were two girls that crossed safely but their parents were killed while they were exiting. We have been seeing that many of the civilians have been asking for the end of this horrific war from inside of Ghouta and asking to be freed.

I am also sure that among them are some fighters that their principle is not terrorize civilians. But why do this innocent people have to stay in the middle? Some elders shared that they were forbidden to cross and if they would dare they would be shot at and obviously if they stay there and the confrontation starts, they will be used as human shields.

This is why international law should apply pressure for the safe passages of these civilians, prioritizing the exit of children and women first.

The views and opinions expressed by Carla Ortiz in this article are those of the speaker and do not necessarily reflect the position of Sputnik.