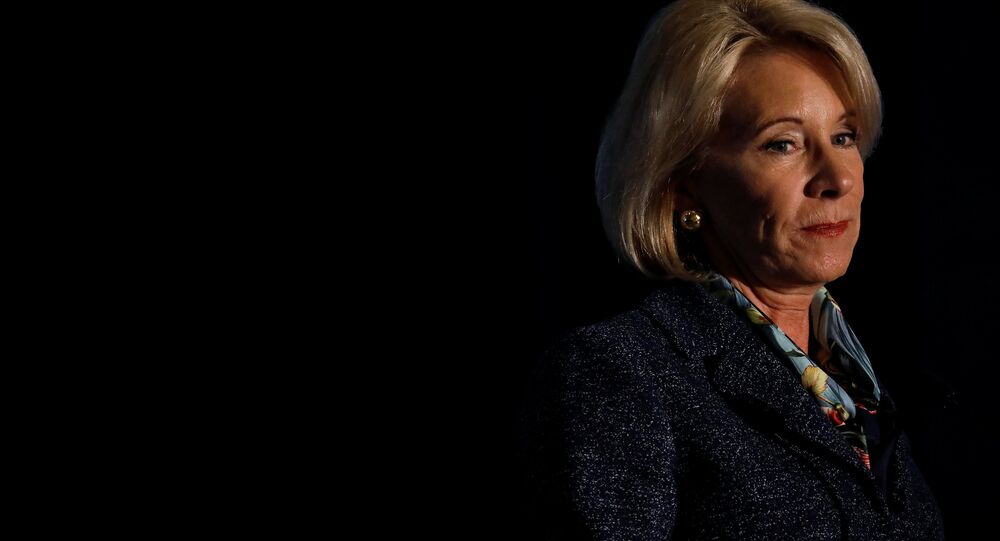 An interview that United States Secretary of Education Betsy DeVos sat down for with "60 Minutes" journalist Lesley Stahl aired on Sunday - and it was a trainwreck, critics say.

With DeVos struggling to offer sound evidence for how her decisions have improved student performance, critics deemed the interview yet more evidence the Michigan native is unqualified for her job.

Speaking with Radio Sputnik's Loud & Clear, Bill Ayers, an activist, educator, and author of the book "Demand the Impossible: A Radical Manifesto," doubled down on the notion that the 60-year-old official "hates public education."

​"She only got [her job] because of her money and because of her ideology… she hates public education and she has her whole career," Ayers told show hosts Brian Becker and John Kiriakou. "She wants to make a private christian educational system… she is terrible [and] her interview was striking and telling on so many levels."

"For 30 years we've been dealing with a devastating bipartisan approach to dismantling public education in favor of charters or in Betsy DeVos' case religious schools… I think it's important to say that Democrats aren't going to be able to mount the kind of opposition we need because they've been in collusion for too long," he added.

"We can't say that the answers to the problems of public education is to privatize the whole thing, which is what DeVos wants."

But DeVos' lack of knowledge about the US education system wasn't the only thing that Ayers zeroed in on.

"The other thing I think we should point to right away is in her interview for ‘60 minutes'… [Devos] is a clear white supremacist," Ayers told Becker. "She cannot separate herself from the idea that everything is about individual kids and that she doesn't want to look at things like the overrepresentation of black kids in expulsion rates or in detention rates… she doesn't want to look at that because she's all about that individual, but that's a lie of monstrous proportions and it perpetuates a white supremacist school system which we need to oppose."

"[DeVos] absolutely doesn't know a thing about public education or educational policy or what good teaching is or what curriculum is… it's a travesty and yet it fits perfectly in with the Trump administration where you put somebody who wants to destroy the environment in charge of the Environmental Protection Agency."

At the end of the day, Ayers says that DeVos is just a "very transparent picture of what [the Trump administration] looks like."