MOSCOW (Sputnik) - The promise of Germany's incoming Minister of the Interior Horst Seehofer to accelerate the deportations of migrants is no more than empty words, while in fact he plans to oppose the tough stance on migration represented in the parliament by the Alternative for Germany (AfD) party, Joerg Meuthen, the AfD spokesman, told Sputnik.

On Sunday, Seehofer, leader of the Christian Social Union (CSU), allied with German Chancellor Angela Merkel's Christian Democratic Union (CDU), told the Bild am Sonntag newspaper that he was working on a "master plan" to speed up deportations of migrants whose asylum applications had been rejected.

"Seehofer’s so called ‘master plan’ is no more than an unsubtle, transparent campaign maneuver and merely a lip service to the media… As Germany’s new Interior Minister Seehofer is determined to support the CSU against the AfD in the upcoming regional elections in Bavaria," Meuthen said.

The AfD spokesman stressed that "a zero-tolerance tough line against criminal migrants and consequent expulsions" should be one of the fundamental guarantees provided by the government rather than an election promise.

The CSU should focus on the fight against migrants who have committed crimes rather than on antagonizing the AfD, Meuthen added. 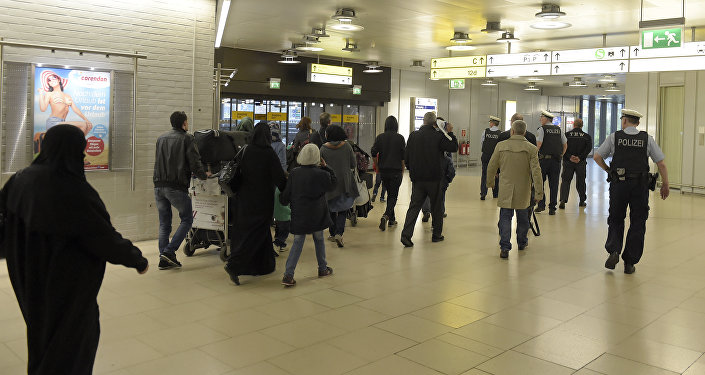 © AFP 2019 / TOBIAS SCHWARZ
Allowing Refugee to Bring Two Families to Germany Sets Precedent for Polygamy - AfD
The AfD believes that the borders should be closed, but people can be allowed to immigrate to Germany based on their qualifications. The asylum seekers should be returned to their countries of origin once the situation there is no longer deemed dangerous.

In 2015, Merkel announced that Germany would open its borders to migrants, fleeing to Europe in hundreds of thousands in search of a safer future. However, Berlin has been lately trying to curb its open migration policy, partly, in a bid to balance out the relationship between the CDU and the CSU, with the latter promoting a harsher approach to immigration.

The CSU proposed to cap the migration at 200,000 people a year, which became a sticking point during coalition talks. In the end, part of Merkel's coalition deal with the Social Democratic Party of Germany was the agreement on a monthly cap of family reunifications for refugees.