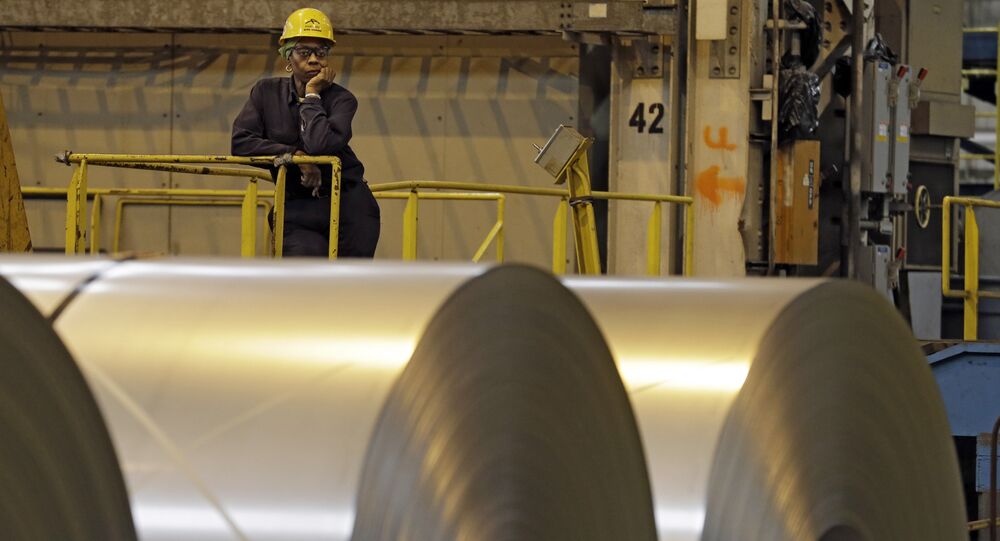 China said it will take effective measures to protect its rights following US President Donald Trump’s decision to increase tariffs on steel and aluminum. The Chinese Commerce Ministry said it strongly opposed the move. Sputnik discussed the possibility of a global trade war with William Perry, an International Trade Attorney at Harris Bricken.

Sputnik: How will President Trump's decision to boost tariffs impact US domestic steel and aluminium producers?

William Perry: President Trump's proclamations were issued on Thursday; I'm in the process of uploading them to my blog, the point is the tariffs, will take effect on March 23 for imports coming in or after that date: 25 percent on steel, 10 percent on aluminum. The objective of these tariffs is to protect the US aluminum and steel industries.

© REUTERS / Leah Millis
US Tariffs: 'Trump Bluffs a Lot, Then Uses That as Strategy to Make Deal' - Scholar
First, everybody would be worried about retaliation, there are a couple of doorways for both countries and products to get out of the case, one doorway is if countries have a security relationship with the United States, obviously, not including Russia and China, those countries are allowed to come in and negotiate with the United States for some kind of a deal with the administration to lift those duties from those countries, I think protected are Europe and the EU and EC might want to go in and negotiate with the United States over these tariffs.
© REUTERS / Leah Millis
U.S. President Donald Trump gives out pens he used to sign presidential proclamations placing tariffs on steel and aluminum imports to workers from the steel and aluminum industries at the White House in Washington, U.S. March 8, 2018

The second thing is, if there's an exclusion process, a request for an exclusion has to be made by a US company that is impacted like the companies that use steel and aluminum in their products, I'm thinking of the beverage containers, the aluminum can industry, they may come and ask for an exclusion.

READ MORE: Beijing: Trade War With US 'to Bring Disaster to the Whole World'

Sputnik: Canada and Mexico have been exempted, but when you're talking about these exclusions I'm thinking there's obviously going to be a lot of companies who are going to say they have got such a special agreement relationship with America, they will obviously be applying for these exclusions, but that itself is going to take time, if they are applying for an exclusion will that then exempt them from the tax of 25 and 10 percent, there are all sorts of different questions and equations to come out of this, how long will it take before these tariffs begin to bite, it could take some time, couldn't it?

William Perry: It will, but right now you can expect the exclusion process to take a while. I understand that Brazil has already gone in to talk to [the US] Commerce [Department] about an exclusion. On March 23rd those tariffs [will] take effect and I expect negotiations with the EU and EC to take several months, so at least for a number of months their imports are going to be affected by this tariff. There's an annex to the Presidential proclamation if you read the proclamation carefully. We haven't seen the annex yet and it may have more exclusions in it, but that's probably not going to come out until the Federal Register notice, which will be published when they publish the Presidential proclamation, which will happen probably in the next 4-5 days. Then the exclusion process the Commerce [Department] is supposed to set up in 10 days, but you probably won't see that in the Federal Register probably till May 15th and that will give you a better idea how to apply to get out, so it's going to be a very complicated process and we have to see what will happen.

Sputnik: How is it going to impact the steel and aluminum consuming industry globally, can you give us an oversight how this particular tariff instruction is going to affect global companies in these industries moving forward?

William Perry: That was always the fear, the total employment in US steel industry is around 190,000 workers but in the downstream the companies, the companies in the United States that consume steel and aluminum we're talking millions of jobs, so there are a lot more companies that consume steel. I remember an old friend of mine who used to represent the steel industry told me, and that is almost ten years ago, “Bill, you have to understand that the employment of the entire US steel industry is less than one high-tech company,” and that's true.

So the impact on the consuming industries is what's worried a lot the Republicans. I think it was 125 Republican Congressmen [who] sent in a letter to Donald Trump, who's a Republican, 'please, don't do this', because they were worried [about] the impact, and are very worried about the impact of these tariffs on the downstream industries. In 2002 when President Bush in response to one case issued trade relief on steel the downstream industries lost 200,000 jobs, so more jobs are lost in the steel-consuming industries that in the steel industry itself, so that's going to definitely be a big problem.

So worldwide, the problem and the fear for countries like [those of] the EC/EU has been that Chinese overcapacity for steel, but most Chinese steel is already blocked from the US. Only less than 5 percent comes in from China, but what it does do is go to other countries and the EC/EU is going to be very worried that the response to this tariff is to divert a lot of the lower cost steel into their country damaging EU/EC steel production.