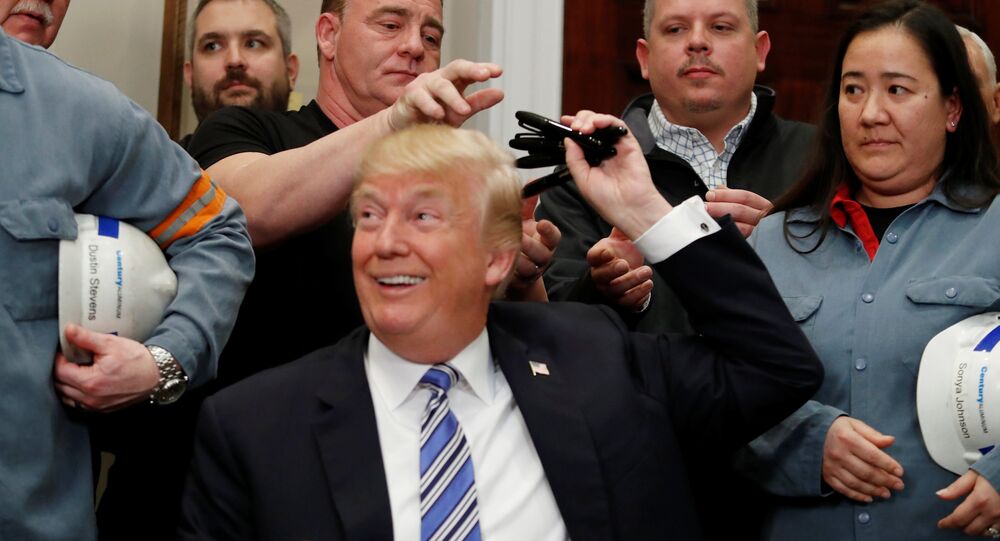 US Tariffs: 'Trump Bluffs a Lot, Uses That as Strategy to Make Deal' - Scholar

US President Donald Trump imposed tariffs on steel and aluminum imports to the US on Thursday but exempted Canada and Mexico, he insists that domestic metal production is vital to national security. Sputnik discussed this with Dr. Jinghan Zeng, Deputy Director of the Center for Politics in Africa, Asia and the Middle East.

Sputnik: How will President Trump's decision to boost tariffs impact US domestic steel and aluminum producers, there are mixed comments to this, what's your take on it?

Dr. Jinghan Zeng: I don't think this is a very good strategy, to be honest, it's really unlikely to achieve the goal Trump's claiming to do, he really wants to fix what he calls the trade imbalance, but raising the tariffs is not one of the best ways to deal with the situation, and it is likely to launch a trade war not only between China and the US but also, between the US and other major countries in the world, like Europe.

Sputnik: Can you explain why President Trump is focused and decided to choose the domestic steel and aluminum industries, can you give us some background to understand why he's focusing on this particular sector?

Dr. Jinghan Zeng: He always has some sort of anti-globalization and protectionist view and if you look at the composition of his supporters and he got a lot of support from people in those industries, in the steel making industry and in the middle and lower class, workers support, so those are the people that put him into the White House and he has promised to do something to continue to win their support so their a logic here.

His position on climate change also shows the same thing as well, because if the US continues to stick to the Paris agreement then what the US will need to do is cut their carbon emissions, and that means there will be less steel industry and there will be higher unemployment rate, especially among those workers that support him. They will lose their jobs, so that's a major reason, he just wants to achieve what he promised during his campaign and his view of how trade is supposed to be and how he can make American economy great again.

Sputnik: How will it actually impact the aluminum and steel industries globally then?

Dr. Jinghan Zeng: I think it's definitely going to have a global impact, so major global exporters to the US will be significantly affected, countries like Korea, Japan, Germany, Turkey, they export a lot of steel and aluminum to the US and face the rise in tariffs, their exports are going to be significantly affected and their domestic industry is going to be affected as well because the US is the largest market. So I think it remains to be seen what they are going to do if they are going to launch sanctions against US exports there might be a global trade war.

Sputnik: You've mentioned some of the beneficiaries behind his decision are their other internal or external beneficiaries in addition to the companies in America, or is it just wholly these American companies who are going to benefit from this decision?

© REUTERS / Thomas Peter/File Phot
'Reckless Damage': Chinese Metal Industry Seeks Vengeance for Trump's Tariffs
Dr. Jinghan Zeng: No, definitely, when Trump made a decision on this and those people who were standing behind him, you'll find a lot of them will directly benefit from it, for example, the steel industry, the aluminum industry in the US, but also immediately it invites the criticism from other domestic US industries, potentially industries that might use a lot of steel and aluminum, because what Trump is doing now is raising a tax, the import tax and then it will increase their cost, so there will be some losers and there will be some winners in what Trump is going to do, and if you look at the stock market it also reflects different reactions from different industries in the US.

Sputnik: If we look specifically at the situation with regard to South Korea and Japan, how much will this decision to increase tariffs affect these two countries then?

Dr. Jinghan Zeng: I think it will significantly affect Korea because the country has a relatively small economy compared to the US and they heavily rely on the US to export steel, so it's going to have a big impact on Korea. The interesting fact is that Korea and Japan, they are traditional American allies in a security sense and if now they're having a trade issue, it remains to be seen how these trade relations, economic relations are going to undermine their security alliance.

Sputnik: How likely is the European Union to retaliate by imposing tariffs on US products, we've had a lot of comment from European leaders, Mr. Macron from France has already said that he's going to do something about this? What else do you feel is going to be done in the European Union, because on the face of it does seem to have upset some of the European leaders with regard to this continued policy of tariffs by the United States, so from my point of view things are only going to get worse, this could really escalate into trade wars if tit-for-tat action continues surely?

Dr. Jinghan Zeng: Yes, I think it might be likely, it depends on the other actors' reactions to the US and how they finally set up the deal. A trade war might be possible but is also depends to what extent Trump will really do what he claims to do. He's always the kind of person who bluffs a lot and then uses that strategy to make a deal so we don't know that yet, but, obviously, Europe has been talking about potential responses, they are saying, for example, they can have sanctions risk, tariffs on American exports to Europe, for example, agriculture trade, I think that's also something China is thinking about because the agriculture industry is one industry where the US has trade surplus.