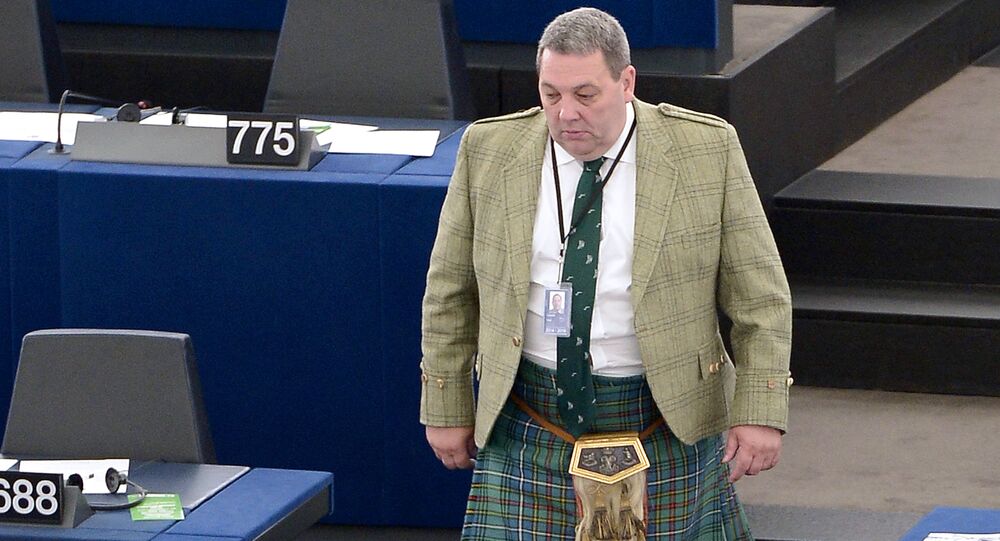 Seizing on Euroscepticism and anti-immigration sentiment amid the refugee crisis, right-wing parties in Europe have managed to attract voters from across the political spectrum. While advocacy groups warn of the emergence of new far-right wingers as an evolving threat. Sputnik discussed this with David Coburn, MEP from the UK Independence Party.

Sputnik: How dangerous is the rise of radical right political parties in the UK?

The danger is not the rise of  right-wing political parties, the danger is in the refusal of the unimaginative left to address the very real problems of our times, the problems that normal, ordinary Europeans are facing in common, immigration is out of control, housing pressure due to immigration, unemployment due to immigration, health provisions, centralization of the EU without even asking people whether they wanted a unified state and the list goes on.

So young people are now swarming to what you call the right, but what I would call libertarianism, because they don't like the failed societies in the world that Marx and his followers have left and they've dominated politics in Europe for so long, people want something different, they want governments that care for the individuals and give them their freedom, and these people have woken up, and that's the danger here, not the danger to Europe, but the danger to the elites who are running Europe, especially elites here in the European Union.

Look what's happened in Italy, our colleagues, the Five Star Movement has 37% (won in the Italian elections on March 4), they are the largest party in Italy and they're doing very well, they may form part of the government, the Swedish Democrats are our other allies and look they might end-up forming part of a government in Sweden, the Lega Nord as well (Italy) and Les Patriotes in France, there's a lot of young vibrant people, they broke away from the Front National (NF - Marine Le Pen's right-wing party) and they're democratic and forward thinking and they have a social aspect to their campaign. This is coming out of the people being fed up with the tired old political parties who just don't seem to be solving any problems, they just seem to be creating them.

Sputnik: The election results that you've just mentioned in a number of countries, do you think they were a surprise to a lot of people or all the signs were there and it was bound to happen?

David Coburn: The signs were there, it was on the cards, but don't expect the elites to see that, they just don't get it. They didn't get Brexit, they still don't get it, they're still trying to punish us, but we have many friends on the continent and the Five Star Movement (Italy), the Alternative for Germany, AfD, who have done very well in Germany, they'll form a future government in Germany, and their leader Alice (Weidel), who came out very strongly for Britain saying to America, how can you treat our allies, our trading partners, the British like this, so we have friends on the continent and I'm personally going on a grand tour of Europe speaking to all our colleagues on the continent who feel they way we do, who want to break up the European Union and I'll be starting a second front against them in Europe, they haven't seen anything yet.

Sputnik: Do you think when they speak of this threat of the far-right, do you think it's just scaremongering?

For more information listen to this edition of Weekend Special with Joseph Cheng.

The views and opinions expressed by David Coburn are those of the expert and do not necessarily reflect those of Sputnik.