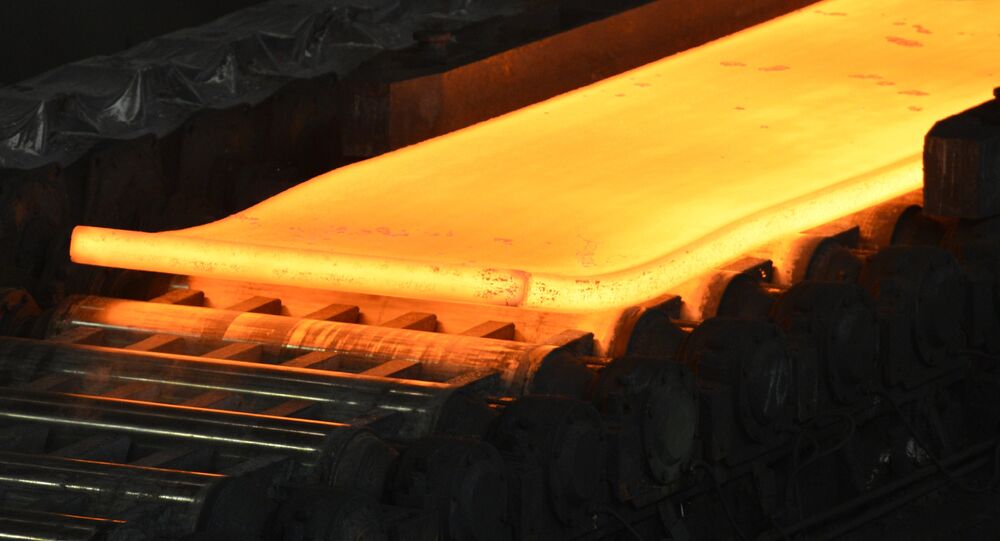 US Tariffs: 'Aluminum Companies Will Benefit, Everyone Else Will Lose' - Analyst

Trump's decision to introduce higher tariffs on steel and aluminum imports would be detrimental to both the US and the EU. This is what French Finance Minister Bruno Le Maire has stated, noting that the US measures would have a major impact on the European economy. Sputnik discussed this with Simon Lester, Trade Policy Analyst at Cato Institute.

Sputnik: What is your take on President Trump's statement that the US has been suffering from unfair trade, is that really the case?

Simon Lester: We shouldn't be surprised, I think one important thing to keep in mind here is theres's lot's of talk about unfair trade, but the particular steel and aluminum tariffs we're talking about here are not about unfair trade, they're based on national security considerations and that's very different. The actions with washing machines and with solar panels that people take with regard to allegations of unfair trade that's pretty well accepted, it's within the norm, all countries take these kind of actions. What President Trump is proposing here, and he hasn't done anything yet, he's just talked about it, is imposing tariffs on the basis of protecting national security, and if we go down that road, and every country starts asserting that a particular import is impairing national security and therefore needs tariffs, we can really see proliferation of trade restrictions in ways that we haven't seen before, and that's really the danger here that we've opened up a new loophole in the system and we don't know where it's going to take us.

Simon Lester: When you look at the couple of the countries that might be targeted, so in particular, the European Union and Canada, who are close allies of the United States, when you assert that the imports of steel and aluminum from those places infect US national security it just doesn't look very credible and that's why both the EU and Canada have come back quickly and said that we cannot accept this and we're going to retaliate, there's just no justification here, and if that happens then the US producers who are targeted by the retaliation will be affected, and I think it's very interesting to see how that is going to play out. Trump may very well want to impose these tariffs but the retaliation is going to affect some of his key allies within the Republican Party in the US and that's going to be very difficult for him to do, and I can imagine what happens in the end, if these tariffs are actually imposed, there will be exemptions for close allies like the European Union and Canada, if that happens the tariffs won't be quite as bad as we fear.

Sputnik: The EU Commission chief executive Jean-Claude Juncker said that this step by the US president is not based by any national security justification it's an intervention to protect the US domestic industry, I suppose this is an interesting point for Jean-Claude Juncker to make in terms of the differenсe between national security and the intervention of US domestic industry, what's the balance? What's your thoughts?

Simon Lester: The US industry is still pretty strong and produces about 70% of all the steel the US Government and business community needs and the US Department of Defense says that it's only a small amount of steel that it needs and the US industry can produce that, so there's no real argument here that imports are impairing national security and that's to what I was referring to earlier, if we go down this road of countries making somewhat frivolous assertions that imports are impairing national security and tariffs are the appropriate response, then we see this proliferation of tariffs back and forth whereas every country can then use this as an excuse to protect it's domestic industry, so I agree with the criticisms coming from allies like the EU and Canada, saying that this just doesn't look like a credible national security threat and the tariffs are, therefore, not justified.

Sputnik: Some experts are saying that Trump's announcement violates the rules of the World Trade Organization (WTO), do you agree with that point?

Simon Lester: The problem with the WTO rules here is there's this broad and very differential exception for security measures and generally the approach has been that everybody treads very carefully and doesn't invoke it, because we know that if we go down that road of people citing national security then everyone is going to do it. If the US claims this as national security the WTO is forced to adjudicate and weigh in on what national security means, it really is going to undermine the good-faith approach that everyone's taken over the years of not invoking national security, so there are rules, it might get litigated, it's not going to be very satisfactory though, because if the US has decided we're going to do this regardless and the WTO rules against it, it really could shake your confidence in the system and then we start to worry whether the US and others will pull out of the WTO or just start ignoring the WTO.

Sputnik: Who's going to benefit the most from these new US imposed tariffs? These are Trump's policies and he's actually getting on with them now, although they are a bit of a shock to the system, what's your feeling?

Simon Lester: He has been clear about this from well before he was a candidate. He believes in tariffs, he believes in protectionism, in terms of who benefits specifically I think it's clear that the steel and aluminum companies will benefit and everybody else will lose. If you watched the stock market right after he made these remarks, the steel companies, the aluminum companies stocks were way up, the auto companies stocks were way down. If you are a company that uses steel and aluminum then you're going to pay more for it, so broadly American society consumers and businesses will lose but these few companies who benefit will win, and that's how protectionism works, it costs everybody a little bit and then that money is transferred to a few favorite interests, that's why people like me say the whole system, that kind of approach is fundamentally flawed, because it really just favors special interest.