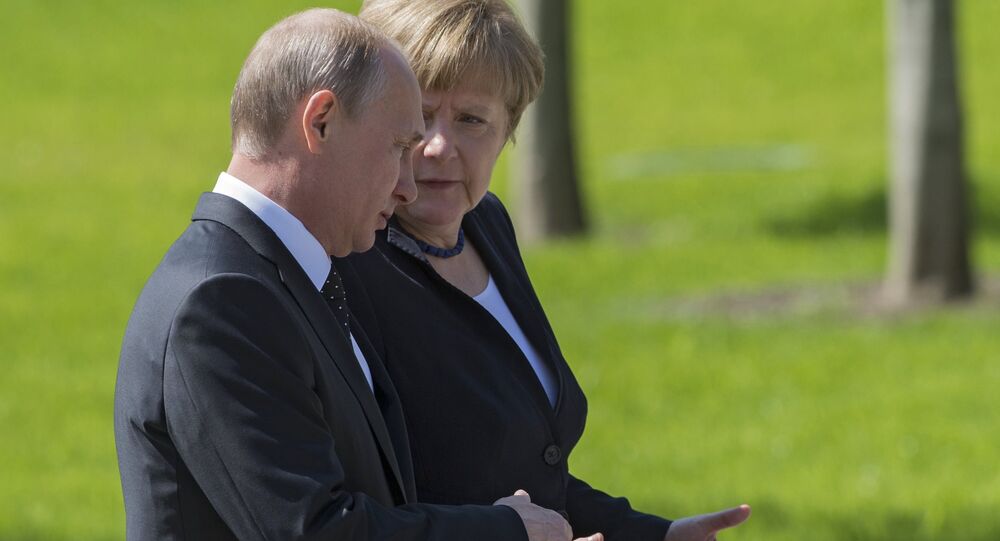 Against All Odds: What's Behind EU-Russia 'Love-Hate Relationship'

Since the 2000s, thaws in relations between Russia and the European Union have repeatedly alternated with periods of mutual distrust, RIA Novosti political observers Filip Prokudin and Vladimir Ardaev write, explaining what lay behind this turbulence.

"These are roughly four-year 'love-and-hate' periods: first rapprochement, then repulsion, rapprochement again," Yuri Solozobov, a director for international projects at the National Strategy Institute told RIA Novosti, adding that "in modern history, one can count down from 2000, when Russian President Vladimir Putin put forward an unprecedented proposal for the EU which envisions the unification of energy and production assets, joint projects in the aerospace sphere and even the creation of a common missile defense system."

© Sputnik
Russia Could Have Become Part of United EU Economic Zone in 2000s – Ex-French Envoy
In 2003 politicians mulled over a scenario of the creation of a common trade space between Russia and the EU, the journalists pointed out, citing former French Ambassador to Russia Claude Blanchemaison.

However, these plans were thwarted by the unwillingness of the countries of Central and Eastern Europe (CEE) to embrace the Russo-EU economic union and the Orange Revolution in Ukraine, which took place between November 2004 and January 2005.

"During the next cycle since 2004, the Baltic countries worked to [Russia's] disadvantage," Solozobov explained. "Clearly, they had a difficult Soviet past, strong personal and economic dependence on Washington, so their attitude towards Moscow was the most aggressive."

But the dialogue on the new Russo-EU agreement on partnership and cooperation reached a deadlock due to Poland's veto, Prokudin and Ardaev highlighted.

"Warsaw demanded that the embargo on the supply of meat to Russia be lifted," the journalists recalled. "[For their part] Lithuanian politicians referred to frozen territorial conflicts in Moldova and Georgia, and requested compensation payments to victims of Soviet 'repressions'."

By 2008 the relationship between Moscow and Brussels had improved regardless of the fact that some CEE countries were throwing sand in its gears.

The political observers noted that at that time, Javier Solana, then the EU's high representative for common foreign and security policy, stated optimistically that although there were disagreements between Russia and the EU, this did not mean that cooperation on other issues would not move forward. In July 2008 Brussels and Moscow resumed talks on the new agreement on cooperation; the second phase of negotiations was scheduled for September 2008.

"However, in August 2008, Georgian President Mikheil Saakashvili's 'five-day war' aimed at restoring Tbilisi's control over South Ossetia suddenly began and ended," the political observers noted. "The adventure proved to be extremely unsuccessful for Georgia. But the relationship between Moscow and Brussels was spoiled again."

In 2009 Brussels officially kick-started the Eastern Partnership (EaP) project — a Polish-Swedish initiative which was unveiled in May 2008. The EU sought further integration with countries of the post-Soviet space — Ukraine, Belarus, Moldova, Azerbaijan, Georgia and Armenia. However, Russia was left out in the cold, Prokudin and Ardaev highlighted.

© AFP 2021 / JOHN THYS
An organiser adjusts the British national flag on April 29, 2017, prior to the EU leaders summit at the Europa building, the main headquarters of European Council and the Council of the EU, in Brussels

2010: Economic Community From Lisbon to Vladivostok

© REUTERS / Ina Fassbender/File Photo
Trump Opens Door to Trade War, America's Allies Ready to Retaliate – Analyst
Nevertheless, in 2010 the EU and Moscow resumed their partnership and even considered a roadmap to implement a —free travel for European and Russian citizens.

The observers referred to that then French President Nicolas Sarkozy came up with a bold prediction that Russia and the European Union would form a single economic space — without visas and with a common security system in the next 10-15 years. In addition, the parties expressed their desire to create a unified missile defense system (ABM).

In November 2010 then Russian Prime Minister Vladimir Putin wrote an op-ed for the German daily Süddeutsche Zeitung in which he outlined his vision for a "harmonious economic community stretching from Lisbon to Vladivostok."

"In the future, we could even consider a free trade zone or even more advanced forms of economic integration," Putin underscored. "The result would be a unified continental market with a capacity worth trillions of euros."

Prokudin and Ardaev recalled that in April 2012, six large associations of German exporters appealed to the German government and the Bundestag asking to abolish the visa regime with Russia in the interests of the German economy. In March 2013, Russian Energy Minister Alexander Novak and European Commissioner for Energy Gunther Oettinger signed a "roadmap" for cooperation until 2050.

Still, in 2014 the February coup in Ukraine, also known as the Euromaidan Revolution dealt a heavy blow to the Russo-EU rapprochement and spelled the end of the negotiations on visa-free travel, the journalists stressed.

The EU imposed sanctions against Moscow following Crimea's reunification with Russia in 2014. The Russia-EU bilateral summits stopped, while the Russian delegation was deprived of its basic powers in the Parliamentary Assembly of the Council of Europe (PACE).

"When Ukraine was set on fire, this immediately blocked the expansion of the Eurasian Economic Union (EAEU) and the re-establishment of economic ties between Eastern Europe and the countries of the former USSR," Solozobov pointed out. "This conflict will poison geo-economic and political relations between Russia and the EU for decades to come."

© Sputnik / Andrey Stenin
Police officers and opposition supporters are seen on Maidan Nezalezhnosti square in Kiev, where clashes began between protesters and the police.

On the other hand, Europe is seemingly turning toward Russia and the idea of creating a common economic space with the country, Solozobov opined, citing the fact that EU member states have grown tired of Ukraine and its inconsistent politics.

At the same time, "the entry of the Social Democrats into the ruling coalition in Germany is a good sign," the Russian scholar believes. He underscored that the Social Democratic Party of Germany regards the concept of a common trade space with Russia as "productive."

What the Future Has in Store for the EU and Russia

Assessing the results of the Russo-EU relationship in the 21st century, Director General of the Russian International Affairs Council (RIAC) Andrey Kortunov believes that the rapprochement between Moscow and Brussels was disrupted due to mistakes made by both sides.

© Sputnik / Sergey Guneev
Merkel: Nord Stream 2 Not a Threat to EU Energy Security
"Moscow overestimated the capabilities of major [European] countries," Kortunov told RIA Novosti. "It seemed that it was enough to establish good relations with Germany, Italy or France to solve all the issues. Perhaps, [the Russian leadership] overestimated the importance of purely economic factors and underestimated other aspects."

For its part, Europe demonstrated certain "triumphalism" while cooperating with Russia, the scholar emphasized: Brussels saw the European model as the only possible way of development and didn't try to reach common ground with Moscow.

However, Kortunov stressed that against all odds, Russo-EU cooperation had demonstrated "surprising sustainability."

It appears that Blanchemaison shares Kortunov's cautious optimism: According to the former diplomat, Russo-EU relations will considerably improve by 2025.