On Sunday, the German Social Democratic Party (SPD) agreed to form a coalition with Merkel's bloc of the Christian Democratic Union and Christian Social Union (CDU/CSU). According to the coalition agreement, the SPD is set to control the ministries of foreign affairs, finance, labor and social affairs, justice, environment, and family affairs.

"By handing over the secretary of finance to the Social Democrats, [former German Finance Minister] Dr. [Wolfgang] Schaeuble has ceded control of our budget to even more fanatic EU-supporters. German taxpayers will now have to pay for [French President] Mr. [Emmanuel] Macron's great power fantasies and the misgovernment of many other Euro countries," Bundestag member and AfD parliamentary group manager Bernd Baumann told Sputnik.

The same applies to the Foreign Ministry and the foreseeable migration policy, the lawmaker added.

"This government puts German interests last… This bodes no well for the future of our country," Baumann said.

The CDU and the SPD seem to have lost touch with reality, as they formed another grand coalition after losing more than 14 percent of votes in the last election from the previous one, he added. 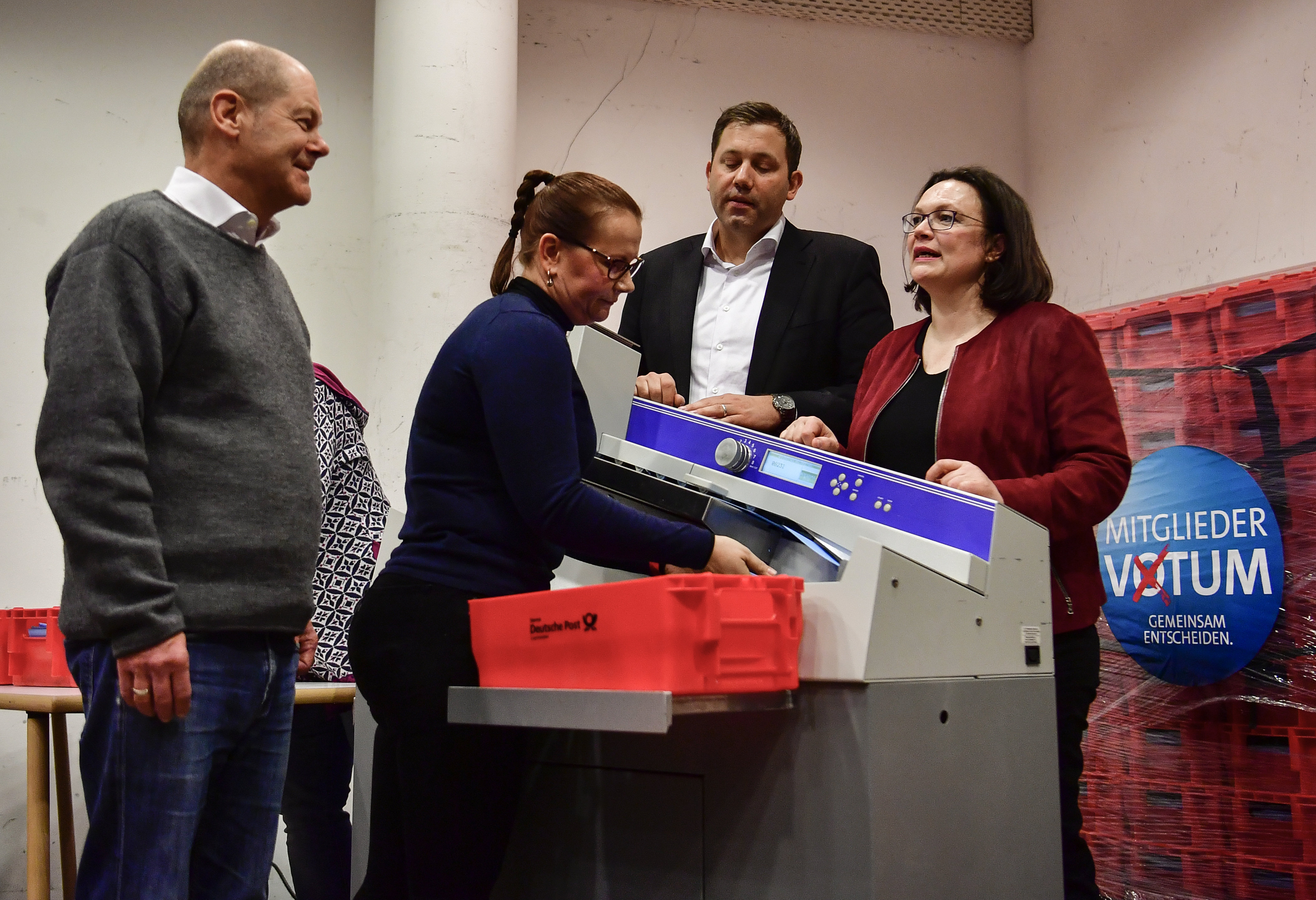 © AFP 2019 / John MACDOUGALL
Acting Chairman of the Social Democratic Party (SPD) Olaf Scholz (L), Secretary-General of the Social Democratic Party (SPD) Lars Klingbeil (2nd R) and German Labour and Social Minister Andrea Nahles (R) react as they look at an envelope opening machine prior to the counting of the ballots, at the headquarters of Germany's social democratic SPD party in Berlin on March 3, 2018, as SPD members voted on whether or not to join a new coalition government with German Chancellor Angela Merkel's conservatives

Roland Hartwig, the vice chair of the AfD faction in Bundestag, told Sputnik that the program of the new government reads as if written in almost all major parts by the SPD.

"It is therefore not surprising that social democrats will run 6 very important governmental departments including treasury. This in all likelihood will lead to a significant further increase of deficit financing and the financing policy of ECB [European Central Bank] will continue to be unchallenged to the detriment of Germany," Hartwig said.

AfD strongly opposes continuation of the previous government's policies and expects to be the only real opposition in the Bundestag, as other parties share many of the coalition's political objectives, Hartwig added.

Since the election, the parties have been trying to form a coalition government in various ways. The first attempt to form a coalition including CDU/CSU, the Greens and the Free Democratic Party failed in late November as a result of the disagreement over migration and energy issues.

Putin to Give His Assessment to German Elections After Consideration