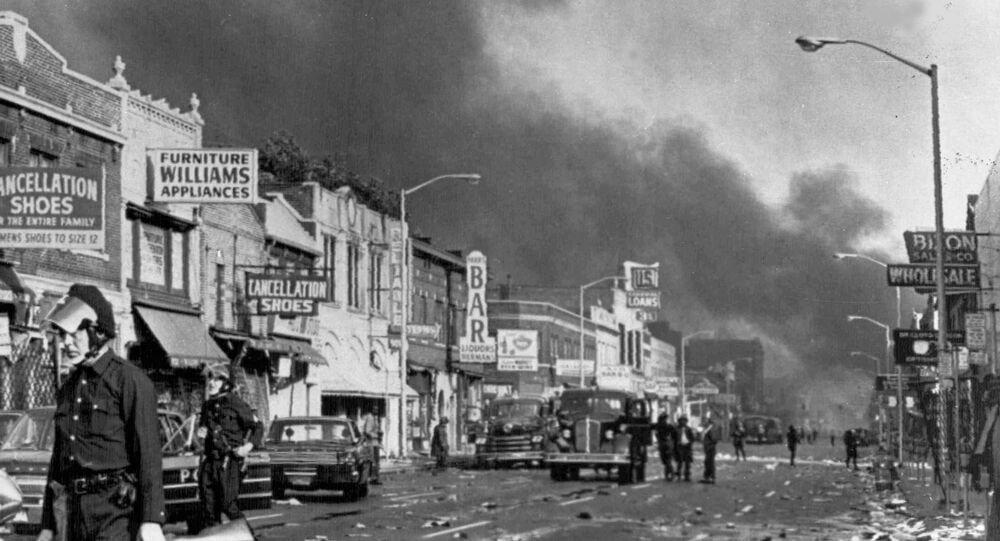 Thursday marked the 50th anniversary of the release of the Kerner Report, a 1968 document ordered by then-US President Lyndon Johnson to address the protests and rioting that had broken out among African-Americans in the mid-to-late 1960s.

Brian Becker and John Kiriakou on Radio Sputnik's Loud & Clear were joined by Dr. Jared Ball, a professor of communication studies at Morgan State University, and Dr. Alice Bonner, a retired professor at the Philip Merrill College of Journalism at the University of Maryland who wrote her dissertation on the Kerner Report. They looked back on the historical context and impact of the report and its relevance to race in the US today.

​"Essentially, President Johnson called for the National Advisory Commission on Civil Disorders in response to uprisings in Newark and Detroit in the summer of 1967," explained Ball. "By the time it was published in the mainstream press today, 50 years ago, he realized that its conclusions stood against everything he himself and his political class stood for."

"So he tried to squash it and ignore it and downplay it, despite its very provocative conclusions. As its most famous statement said, we were headed as a nation towards two separate societies: one black, one white, separate and unequal."

Ball goes on to note that the report condemned Johnson's economic programs as ineffective in solving the problem of poverty among African-Americans. Johnson ignored the reports' recommendations.

Becker asked Bonner about the much-cited Chapter 15 of the 428-page report on the relationship between the press and the struggles of the African-American community.

"I wrote a great deal about Robert Maynard, who was the foremost spokesman for [greater representation of African-Americans in journalism,]" said Bonner. "In 1965, he was a new reporter at the Washington Post, hired among a cadre of race reporters. What happened was that after [the Watts riots] in 1965 burned down Los Angeles, the press began to get religious on racial integration. There were very few black reporters in the mainstream of any magazine. They had counted a few years before and came up with fewer than 50."

"But the black press was still a powerful instrument of telling the story of black America and had not begun to fade as it did in the years of actual integration in many institutions in the country. Chapter 15 is the shortest and has been the most returned-to chapters in the commission, because the power and influence is impossible to ignore."

"The Kerner Commission, often quoted, said that the press was shockingly backward in seeking out, hiring, training, and promoting Negroes. The commission urged the media to employ, promote, and listen to Negro journalists. If the media were to comprehend the Negro community, they must have the help of Negroes to report with understanding, wisdom, and sympathy on the problems of the cities and the problems of the black man," Bonner went on to say.

"But after Watts, in the rush to hire black journalists and after that a few Latinos, it went back to sleep. In spite of Newark [riots of 1967,] in spite of Detroit [riots of 1967], in spite of Chicago [riots of 1966], it took the 1968 riots [that broke out nationwide following the assassination of Martin Luther King, Jr.] for the actual focus to take place."