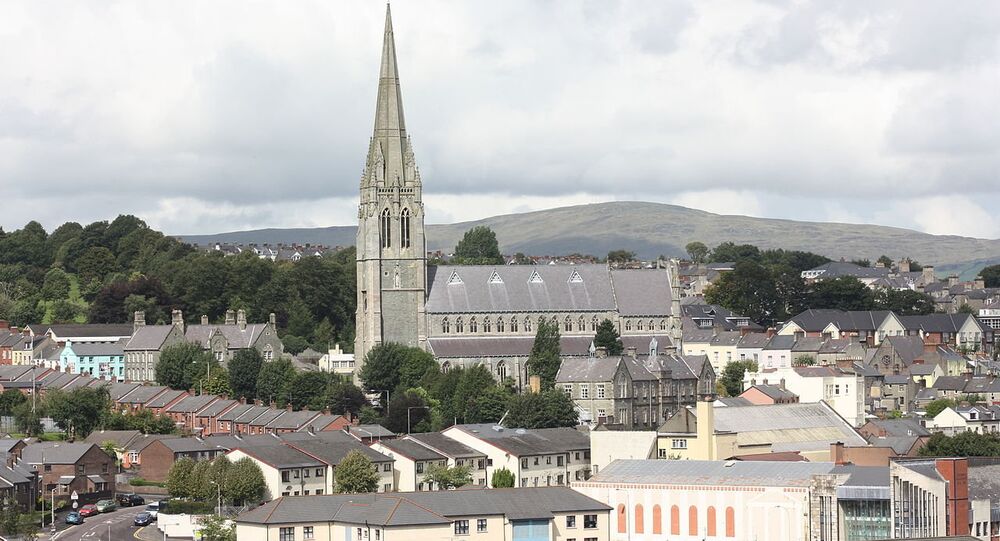 Theresa May has dismissed the EU's draft option for Northern Ireland after the EU published its proposed text of the Brexit agreement. The draft bill proposes establishing a “common regulatory area between the Union and the UK in respect of Northern Ireland” in effect keeping Northern Ireland in the customs union after Brexit.

Sputnik discussed the EU draft on the Brexit deal with Rodney Atkinson, founder of freenations.net website, one of Britain's most successful political economists and a former advisor to ministers.

Sputnik: The Brexit treaty stated that Britain must commit to the possibility of Northern Ireland staying in the EU customs union and the European Court of Justice, how likely is that Britain will agree to this?

Rodney Atkinson: No likelihood at all. Even mushy Mrs. May, who's not used to saying things in a clear and strong way, has completely ruled it out. Of course, the European Union is not saying that must be the case, it's saying that it's one of the options. There isn't really a Northern Irish problem here, anyway, as it has been stated by the British Inland Revenue service, by the British ministries dealing with agriculture, they both said they could envisage no scenario in which it was necessary to have a real hard border between North and South in Ireland. Also, of course, if there was any form of customs union, as the Labour Party is suggesting, then of course, we couldn't negotiate free trade agreements with other countries, so that is out, and the other thing, of course, that they forget about Ireland, is that there's lots of tax duties and indirect taxation differences between the North and the South. It's nonsense to say there's a problem, and it's nonsense to say that Britain would ever agree in any way to dividing Northern Ireland from the United Kingdom.

READ MORE: New UK-EU Customs Union Would Be Betrayal of Brexit Vote — May

Rodney Atkinson: Well, of course, we have all already in principal agreed to a substantial exit settlement of up to 50 billion euros, of course, this is only part of the agreement and as we say nothing is agreed until everything is agreed. Also, of course, we are insisting that if there's a trade agreement, which we are offering, then it must also include financial services in which, of course, Britain and London particular are pre-eminent, so all these things have got to be agreed, and a lot of these things are red lines for the British side, it's just that our negotiators are not as strong in shouting from the rooftops as Mr. Barnier (Michel Barnier — EU chief  Brexit negotiator) and his friends are, but the EU has got a lot of work to do in order to come to an agreement which will satisfy German and French carmakers, wine producers and all the others who would be seriously affected if there was no free trade agreement.

Rodney Atkinson: There's lots, as I say, there's no problem in the North-South border, indeed any borders really in future. There's lot of people who still have the feeling that a trade border is full of people checking every lorry that goes through and every package that goes through, and, of course, that's not the way its done at all nowadays, it's all sort of pre-declared digitally.

Sputnik: Some experts have been saying that the European Union suggestion raises the specter of Britain leaving the bloc with no deal, what would you say to that?

Rodney Atkinson: I don't think this particular document does that, it's really a summary of the state we're at the moment, but it all depends, if some of Barnier's more extreme claims turn out to be non-negotiable, then, of course, we would say: “I'm sorry, we can't come to an agreement with you” — and we'll have to leave without a deal and this is going to cost the European Union hundreds of billions of euros, but I'm sure normal people negotiating from a position where we already have free trade, this is the only time a trade agreement is being negotiated where you start from a position of free trade or reasonably free trade, and it should be easy enough, it's just a question of the political will, and if the European Union wishes to play hardball, trying to punish Britain for leaving, then, of course, I think the EU will be the one to suffer most.

The views and opinions expressed by Rodney Atkinson are those of the speaker and do not necessarily reflect those of Sputnik.