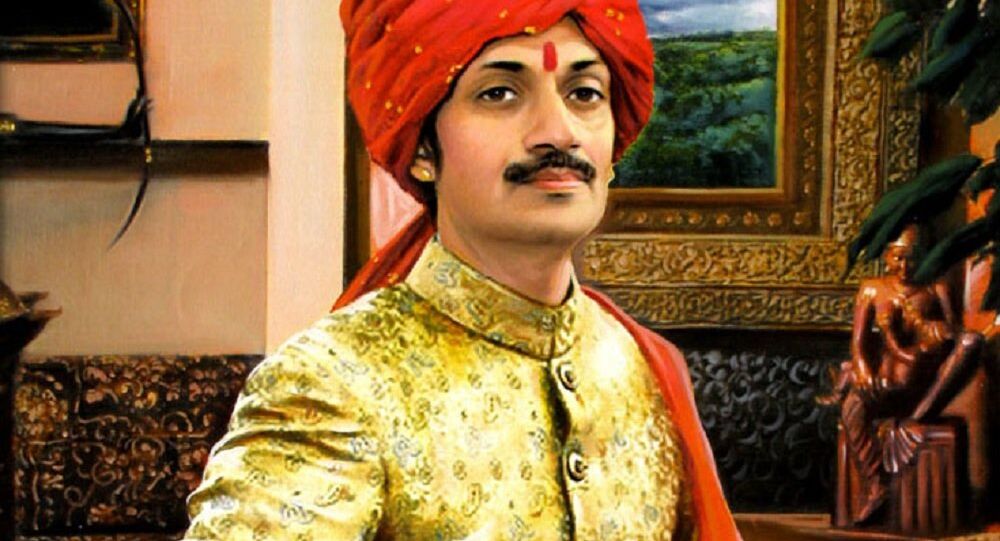 Ten years after coming out of the closet, Prince Manvendra Gohil of one of India’s erstwhile royal families is today an ardent sexual minorities' rights activist. Sputnik spoke to Manvendra Gohil, who runs the Lakshya Foundation to secure the rights of the LGBT community.

New Delhi (Sputnik) — Prince Manavendra Singh Gohil of the erstwhile Kingdom of Rajpipla in the Indian state of Gujarat made headlines in 2007 when he became the first member of any Indian royal clan to come out in the open about his sexual orientation. Apart from the media frenzy that surrounded the announcement, what made the situation most noticeable was that he was shunned not just by his community in Rajpipla, but also by his own parents who publicly disowned him through a newspaper advertisement.

Sputnik: What inspired you to take the decision to come out in the open and establish yourself as an icon for the LGBT community?

Manavendra: It was nothing planned or deliberate. I had a very protective childhood with all kinds of assistants and guards around and I never knew what I actually was. I got married and that marriage was something which I did in full agreement and liking. Eventually, when I was 28, after divorce, I discovered what I am. There was all kind of noise and the media declared it as a bold step. My parents announced via a print advertisement that they were taking away all my rights as a royal successor. I do not believe in fighting hatred with hatred. I strongly believe that only a Gandhian fight can secure the rights of our community.

Sputnik: Did you have people who stood by you?

© REUTERS / Pascal Rossignol
Denied a Job in Air India, Transgender Woman Seeks Mercy Killing
Manvendra: I was supported by all when I came out open in 2007. In fact, the public pressure and the way press wrote about it, made my parents take me back and it is all fine for me in the family since then. But the news won me many friends and many likeminded people from across the world came together to stand by the Indian LGBTQ community and their fight.

Sputnik: Do you have someone special in your life right now?

Manvendra: I have decided to be single now till I get my freedom. Freedom for me is equal rights for every LGBTQ member of this great country. Over the years, I am of the firm conviction today that gay rights are not rights of a particular community, they are human rights. The way to attain it is through dialogue and mutual understanding, something like India attaining its freedom.

Sputnik: Can you share with our readers more about the intervention for the community by you or by the Lakshya trust?

Manavendra: I started the Lakshya Foundation in a rural setting in a very small way to organize the sexual minorities. It was more about helping ourselves within our limited resources. But we grew with mutual cooperation and I am glad to say today that Lakshya foundation is one of the foremost agencies to implement Gujarat government's health intervention programs for HIV AIDS. We are reaching out to around 20,000 people every month with a dedicated volunteer network and with a staff count of around 250 people. 80 percent of the staff is LGBTQ members while the rest are straight people. That's why I say India is a land of paradoxes, while the LGBTQ community is headed in a fight with the government for their rights; it is the government which funds us for our welfare programs.

Sputnik: You are quite popular on social media with a huge fan following. Do you find social networking to be an empowering tool?

Manavendra: I think it is. It helps us to reach out to people and build friends across the borders. When I am talking to Sputnik, this story can be shared and read by anyone and anywhere in the world through the social media platforms. Although, there have been privacy concerns raised but our experience has been that you get a global community to stand by your fight because you are connected. Moreover, I have believed that gay rights cannot be won in the courtrooms but it has to be won in the hearts and minds of the people. I have found social media platforms as a tool to extend this nonviolent fight to attain freedom for sexual minorities. Gandhi and his teachings are vital for our fight and interaction and building a community of volunteers in this fight are important.

Sputnik: Is it true that you have a global community of friends. Please tell us more about it. Do you see this global network and yourself becoming an international pressure group to strive for gay people's rights?

Manavendra: Yes that's true and this global community has been our perpetual strength. We are rooted in a civilization that believes in ‘Vasudhaiv Kutumbakam' which means the world as one family. When I came out in open, a lot of my gay friends left me but a lot of other people from across the world came to my support. And slowly it has built up into a good strong network. There are many like Carla Bruni Sarkozy of France or former Australian High Court Justice Michael Kirby who are well-wishers. In fact, the Delhi High Court's judgment in favor of gay rights in 2009 had a lot to do with the advice our community received from Justice Kirby. I try and get in touch with all them well in the best possible way.

Sputnik: Why have you adopted the Gandhian philosophy?

© CC0 / Pixabay
Radical New Method Offers Fulfilling Gender-Affirmation Surgery for Trans People
Manvendra: I remember speaking at a fundraising event in New York for Lakshya Foundation. I spoke on how the "Satyagraha" or the seeking of truth for the sexual minority can be fought the Gandhian way of peace and tolerance. With a painting of Gandhi on the background, I spoke of winning over of the oppressor and the world community welcomed it with a thunderous applause. In fact, if we confront everyone, including the government, to reinstate minority rights, then it only creates further animosity and disrespect. Non-violence and peace can win over friends and build a strong global movement for gay rights. Gay rights and their struggle against discrimination and prejudice in India are gaining momentum as we are trying to organize ourselves in the way that Gandhi organized this great nation toward its freedom. Our fraternity should strive to be an example for the civil society in general.

Sputnik: You have recently announced the setting up of a center for the LGBT community within your palace. What is your vision?

Manavendra: I have a royal establishment built in the year 1927 by my great-grandfather on the banks of river Narmada near Rajpipla. It was used by our ancestors to host dignitaries and everyone, including the viceroy of British India, has been our guest. In 2016, I decided to develop it as a center for the LGBTQ community and none other than my father did the honors to inaugurate the reconstruction work of that palace. It was partly destroyed in a flood and now it being reconstructed and it will eventually be built into a safe bastion for the community; for all their needs including health and vocational training.  We want the gay community to assemble fearlessly and in their own comfort.

Sputnik: Do you see the recent rise of radical elements and self-righteous groups as a worrying trend?

Manavendra: Any kind of violence is a matter of great concern. Getting back to the hatred towards the gay community, I say that everyone has a right to protest but it has to be in a peaceful way. We cannot have much control or comment on the fringe elements but the example of gay community winning the support of police establishment in Gujarat is an example that mutual dialogue and binding trust can set an example for a nonviolent struggle.

The views and opinions expressed by Manvendra Singh Gohil in this article are those of the speaker and do not necessarily reflect the position of Sputnik.