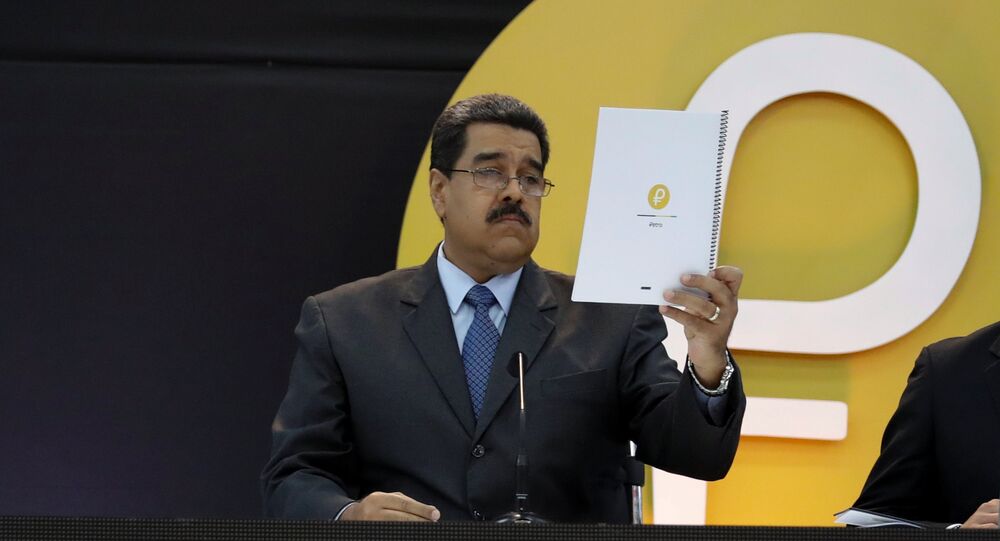 Venezuelan President Nicolas Maduro announced preparations to launch a new gold-backed cryptocurrency. Venezuela then started the pre-sale of cryptocurrency tokens supported each by a barrel of oil. Meanwhile, Iran’s Minister of Information and Communications Technology stated that there is a plan to develop a platform for cryptocurrencies.

Sputnik: In your view, can Venezuela’s and Iran’s cryptocurrencies avoid financial blockades?

David Gibson: Very simply yes, but it's with a caveat if executed and operated correctly. Really to date, traditional methods of sanctions by the United States and the United Nations used to target assets that were accessible to them by a way of jurisdiction, I suppose, where sanction targets typically include cash bank accounts and other liquid assets, accesses to capital markets, property and also transportable types of good, whether its raw materials, manufactured equipment, foods, and medicines and so on.

Cryptocurrencies themselves sit outside of the realm of what the US and the UN can block the movement of and the access to, even going to the extreme of shutting down the entire Internet, would only be a tiny hiccup really, until Venezuela or Iran set up direct communications to countries like China, Russia or India. The use of cryptocurrencies is a perfect way to get around the application of such sanctions, and quite frankly, I wouldn't be surprised if North Korea introduced something, because many people are fed up with the never-ending US war-drums and are aware of the reality that North Korea lacks  actual aggression, so it would be interesting to see how well something like that would get taken up.

Sputnik: What consequences could this have on these particular countries, Venezuela and Iran's relations with the US? Is it likely that the US will impose, therefore, tighter sanctions then?

David Gibson: Fundamentally US foreign policy is primarily concerned with two things — first, it's everyone's continued use of the US petrodollar, and the second one being, actually, having control and authority over dealings and matters above the sovereign status to the benefit of the US. For a long time, Venezuela and Iran and many other countries have been increasingly rejecting both notions. Every time it's happened on a country level the US has reacted quite badly, either apply sanctions or even go to war, and these countries have been steadily moving away from the US dollar and dealing with each other directly, using their national currencies. The use of unsanctioned assets like cryptocurrencies will only further speed up the split with US doctrines, so in terms of US relations, it can only really continue to deteriorate until the US realizes it has to back off.

Sputnik: Venezuela looked to be very optimistic about the success of its cryptocurrency, in your view what benefits in its use are there for the country launching its own cryptocurrency?

© REUTERS / Marco Bello
One in 2000: What Makes Venezuela's Petro Cryptocurrency Special
David Gibson: There are two parts, you have cryptocurrency and you have a digital currency, the two are really quite different things, this is sort of where you need to be careful to assess them in terms of the current situation, how things are going to unfold in the future. What Venezuela has done, that is, they tried to initiate a digital currency, an asset-backed digital currency, it's really more of a cryptocurrency, so the Venezuelan government tend to be more optimistic about all of their policies, however, it would seem with optimism, will they think what will happen will quite match up to the reality of what actually happened. I wish them all the best of luck and hope that all goes well, however, if done properly digital and cryptocurrencies often are amazing opportunities for countries seeking financial sovereignty which is quite a political aspect, you know, it means they are their own masters of where they want to go with or without external interference.

When you look at cryptocurrencies’ decentralized aspects, we've seen how robust they are when countries have tried to brush off sanctions and have said you can use them and then bring them back in, so they do seem to rebound quite quickly, they're quite immune to this, but there are going to be limitations in terms of the cryptocurrency aspect side of things, like money-laundering and customer policies, and also basic things that need to be put in place they don't exist with cryptocurrencies at the moment. But with assets backed digital currencies going forward, I think that is going to be the massive growth there and I think it will push cryptocurrencies into one corner because it is going to evolve in a very different way.

READ MORE: In Venezuela’s Footsteps: Iran Mulls Own Cryptocurrency Amid US Sanctions

The views and opinions expressed by David Gibson are those of the speaker do not necessarily reflect those of Sputnik.