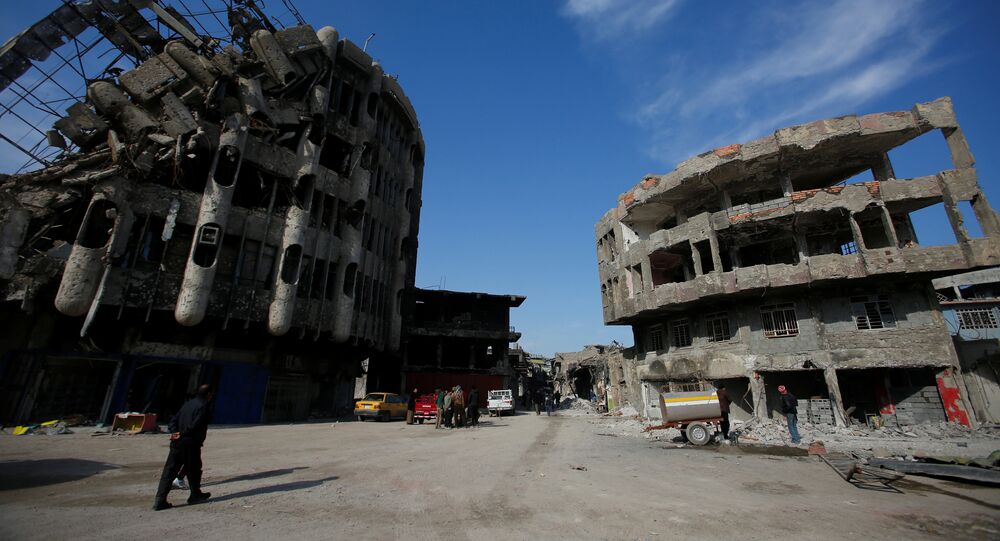 Turkey has pledged to provide Iraq with a $5 billion credit line for its reconstruction efforts –more than the sum pledged by any Gulf state, the EU or even the US. What's behind Ankara's apparent generosity? Sputnik Turkey spoke to political scientist Serdar Erdurmaz and economist Bartu Soral to find out.

Turkey's loan was the largest single amount pledged at the International Conference for the Reconstruction of Iraq, held in Kuwait last week. Saudi Arabia, Qatar, Kuwait and the UAE pledged between $500 million and $1.5 billion in aid and investment. Western countries and Japan also confirmed their intention to assist Iraq, including via direct aid, export loans and credit lines. Washington plans to grant Baghdad up to $3 billion in credit, while the EU has pledged to invest some $400 million.

In addition to the loan, Turkish Foreign Minister Mevlut Cavusoglu promised to provide Iraq with $50 million in humanitarian assistance, and to assist Turkish companies looking to invest in Turkey, where some $25 billion has already been committed.

© AP Photo / Karim Kadim
Iraqi PM Urges Int'l Community to Join Efforts in Anti-Terror Fight in Syria
Asked to comment on the generous nature of the Turkish loan to Iraq, and why it exceeds the commitments of other regional and even world powers, Serdar Erdurmaz, deputy director of Ankara-based Turkish Center for International Relations & Strategic Analysis, told Sputnik Turkey that it comes down Turkey's security interests.

"This is quite an understandable step," Erdurmaz said. "In using its resources to benefit Iraq, with which it has a common border, and where it would like to see a unified, stable state, Ankara is demonstrating the importance it attaches to the restoration of stability among its neighbors. As part of this process, Turkey will provide a large amount of credit, and Turkish business circles will play a significant role in Iraq's reconstruction."

According to the observer, Turkey's economic assistance will doubtlessly strengthen relations between the two countries, "making it easier for Ankara and Baghdad to interact in areas such as combating terrorism, and impeding attempts by the Kurdish administration in northern Iraq from unilaterally creating an independent state."

© AP Photo / Emad Matti
An Iraqi soldier removes a Kurdish flag from Altun Kupri on the outskirts of Irbil, Iraq, Friday Oct. 20, 2017
© AFP 2021 / DELIL SOULEIMAN
US Remains the Main Agent of Chaos in Syria – Geopolitical Analyst
Erdurmaz stressed that a strong central government in Iraq would have a positive impact on Turkey by reducing the number of threats Ankara faces in the region.

Nevertheless, the analyst intimated that even all of the money pledged to Iraq's restoration was not enough to fully restore the country's damaged infrastructure, with Mosul's restoration alone estimated to need about $80 billion dollars. In any case, Baghdad must work to restore the city as soon as possible, and Ankara must help in the process, Erdurmaz said.

For his part, Bartu Soral, an economist and program manager of the UN Development Program, emphasized that Turkish political and business interests should be kept in mind.

"I believe that this is a kind of ostentatious maneuver meant as a display of power," the economist said. "In a situation where Turkey is investing by borrowing from abroad, and is forced to come up with $210 billion to pay off its debts and cover the trade deficit, the decision to extend a $5 billion loan to another country cannot be seen as anything but an internal political move, aimed at demonstrating Ankara's power and wealth before its electorate."

© AP Photo / Felipe Dana
In this Nov. 15, 2017 photo, aerial view of destroyed building and shops in the Old City of Mosul, Iraq
© AFP 2021 / DELIL SOULEIMAN
US Continues to Supply Kurds With Arms, Provoking Turkey - Russian Foreign Ministry
According to Soral, instead of such grand gestures, Turkey should focus more on covering its own trade deficits. "In the past ten years, Turkey's trade deficit has amounted to some $700 billion dollars. As sad as this may sound, Turkey does not invest in production, industry, agriculture and livestock. Investments go only to areas related to infrastructure, such as reservoirs, bridges, roads, etc., but this does not contribute to making up for the country's foreign trade deficit."

Ultimately, the economist believes that Ankara's gesture is aimed primarily at shoring up Turkey's own construction industry. "In a situation where goods that we once produced domestically are imported, the government has decided to give this large loan for Iraq's reconstruction. The only reason behind this is that it will open new opportunities and stimulate the development of the construction sector, which is the only sector that the Justice & Development Party has systematically and intensively built up over the past 14 years. They have contributed to the growth and enrichment of construction companies tied to the party, and turned the Turkish economy into one based on the construction sector. Now this sector has stalled, and the authorities are taking this measure to revive it."