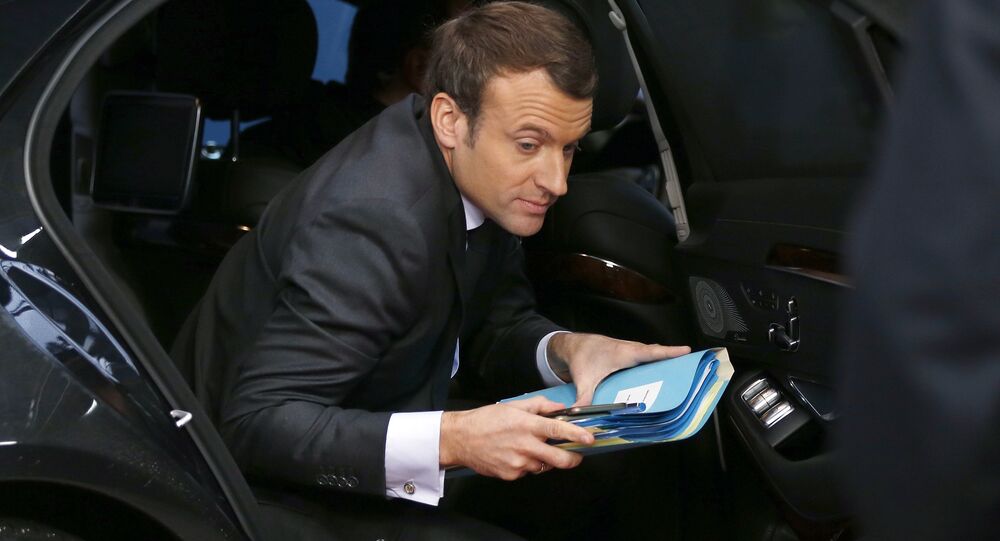 PARIS (Sputnik) – The French compulsory military service, the reintroduction of which has been proposed by President Emmanuel Macron, is too short to provide full-scale military training to young people and instead aims to make them aware of the existing security challenges that the country is facing today, experts told Sputnik.

On Tuesday, Macron reiterated his campaign pledge to restore compulsory military service, which was phased out between 1996 and 2001. Macron said conscription would be "universal" and obligatory, would last from three to six months, focus on the questions of civil education, and give a direct "experience of military life." The government is planning to test the program in 2019.

French servicemen have expressed their concerns with the initiative, not willing to play an educational role in addition to the numerous operations they were already engaged in.

Experts believe that the initiative is good for building social cohesion among young people but raise concerns about the financing of the program, which could cost France up to 3 billion euros (3.8 billion) per year.

"I think it is a necessity to cultivate the notion of defense in young people, understand the need to protect the nation. All this is very important, we need this…  It is important that the young generation has the connection to defense, knows why it is necessary," Jean-Pierre Bleuzet, a non-commissioned officer for the French gendarmerie and the vice-president of the GendXXI, a national association of gendarmerie members of the 21st century, said.

Bleuzet stressed that everything depended on the content of the program as well as its orientation.

"You can study a lot about the means and economy of defense. At the same time you cannot learn how to use arms in a month. The content of this program is important, which direction it takes – will it be civil, or military. I assume it will be civil; in a short period you cannot teach people to use arms; you can teach [how to provide] first aid, for example, and give them some important messages in general,” the expert noted.

Similarly, Pierre Colomina, a researcher specializing in defense politics at the French Institute for International and Strategic Affairs (IRIS), pointed out that national conscription would be different than previous formats from almost two decades ago.

"It is not really a military service we are talking about, it is not the same format that existed before, it is much shorter now. We were talking about one month. Now, Macron announced it will be between three and six months, which means it is not aimed at militarizing citizens, but rather at making them aware of certain existing security challenges. It is a kind of window between the civil and military worlds that shows people the security challenges we have today,” Colomina said.

While the researcher reacted positively about the idea of making young people understand the nature of current security challenges, he suggested that making the initiative work might be complicated.

"This idea of social mixing, when you take young people of the same age and make them work on a common task, will it work? It has to be seen, but it seems rather complicated to me… The question today is how to unite young people around the common challenge, and the topic of defense nowadays… is a challenge that can serve as a unifying factor," Colomina underlined.

Despite the positive effect that the renewal of obligatory military service might have in terms of boosting social cohesion and security awareness, the question of its financing, structure and personnel remains open, experts say.

"Making this service mandatory is good, but one needs structure, personnel, financing… The question that bothers me is whether it will be the [French] Defense Ministry that will pay for it, or the Ministry of Education, for example? It is clear that the defense budget was cut down significantly during these past years… and if we now add this to the budget, it will be costly. So will the Defense Ministry be charged with these costs, will a separate budget be allocated to this monthly defense training?" Bleuzet said.

© REUTERS / Philippe Wojazer
UK, France Agree New Border Security Treaty - Official
According to the expert, all these issues should be outlined in the law regulating the training.

"Also, as for the military personnel, currently engaged in various operations — like the Sentinelle, for example — if we give them an additional mission, it will become very complicated. The servicemen are fully charged with their everyday missions, if we add anything, it will be a supplementary workload… These questions have to be clarified. The military service bureau will be affected by this measure, so it needs to increase its human capacity," Bleuzet noted.

Colomina, on his part, raised the issue of the French troops' existing concerns about Macron's initiative.

"Now the army rose against this idea, saying that playing an educational role was not its domain, and [that it] has other operational and professional priorities… They have concerns about the personnel and the financing. I think this initiative of the national universal service is not a solution for the army… [The program] is rather about re-connecting young people, engaging them in social life, making them interested in social challenges again and participating in the associations," the expert underlined.

He also stressed that the issues surrounding the training during the service were yet to be clarified.

"In the event the project has a military aspect, which I think will be the case, the question is whether it will be the army to provide personnel to train the young people; if yes, what will they be able to do in three to six months? They will not make soldiers out of them, it is not the goal,” Colomina pointed out.

The end of compulsory military service in France was announced by then President Jacques Chirac's government in 2001.

Increased Military Presence Efficiency in France May Be Questionable