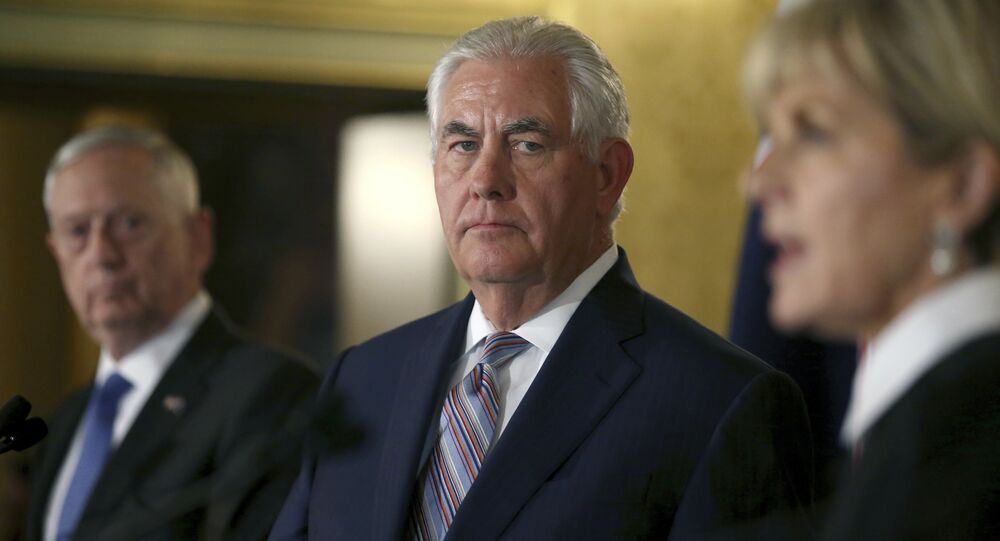 On his five-day Mideast trip US Secretary of State Rex Tillerson is travelling through states dissatisfied with Donald Trump's foreign policy which makes his tour a "mission impossible," Joseph Camilleri, Emeritus Professor at La Trobe University in Melbourne, and fellow of the Australian Academy of Social Sciences, has told Radio Sputnik.

Sputnik: US Secretary of State Tillerson has just about done with his Middle East tour. Can you give us your assessment of how successful this trip was so far?

Joseph Camilleri: He had mission impossible to accomplish because of a series of US policies involving some of the countries he's visited and few others in the Middle East have created a number of bushfires, if I can put it that way. So, putting them all out was not going to be either easy or indeed feasible but the issue that has caused much contention and unhappiness in the Arab world has been of course President Trump's decision to relocate the US diplomatic mission from Tel Aviv to Jerusalem and clearly that will remain a bone of contention with a number of Arab countries including some of those which he has visited.

And it's clear that in order to improve the climate with Jordan there has been an announcement of increased aid to that country. And I think they must feel that the relationship is in some crisis and they feel the need to smooth the situation as much as possible and the aid is certainly one of the ways in which they have thought it might help. But there was also talk that there is an advanced plan for moving the peace process forward but it's difficult to see what any plan can do in the present climate of Israeli-Palestinian relations, and the particular role which the United States has been playing does not placed in a good position to act in any kind of mediator or a peacekeeping role.

Sputnik: This news of a Middle East plan which was in the words of Tillerson "well-advanced" but no details were provided on this. Do you think this is just sort of a bluff, or do you think there really is some kind of very well-advanced plan?

Joseph Camilleri: I am sure they are working on some plan but whatever the plan is — advanced or very early stages — it is very difficult to see having any significant impact on the conflict between the two. It is very difficult to see what kind of plan the United States which would be able to come up with which would in any way give satisfaction to the Palestinians and sufficiently pressed pressure the Israeli government to make significant concessions, without which it's difficult to see how any headway in the peace process can take place. So I am not at all hopeful that there will be a plan emerging from the United States which will significantly change the current situation.

Sputnik: Turkey has been very unhappy about the US military's alliance with the Syrian Kurds to fight Daesh (ISIS/ISIL). Turkish President Recep Tayyip Erdogan has just said that "we will respond aggressively if you hit us" and "you've never experienced an Ottoman slap." On the other hand we have Tillerson who says that Turkey is still a very important NATO ally of the United States. Are they going to try to find a way to continue working in the same direction? What kind of chances do you see?

Joseph Camilleri: I think that the questions are primarily political and strategic and I can't see how, unless the United States is able to make some significant concessions in terms of its support for the Kurdish groups, I don't see how that would satisfy the Turkish government. So I would expect Erdogan to stand firm on his position and he too, by the way, is greatly displeased by the US decision in relation to choosing of Jerusalem as the site for the diplomatic mission of the United States.

And there are other bones of contention between the two countries. So the relationship is going to be very uneasy, I think, for some considerable time. And already we can see signs of Turkey trying to diversify its relationships. It has eased some of the difficulties in the relationship with the European Union, Germany in particular. It is obviously trying to rationalize, to some extent, normalize its relations with Russia, it may even be willing to experiment with a more accommodating position towards Iran as time goes on, though that will not be easy. I think that is the stick which Erdogan will be using in addition to the possibility of a military confrontation occurring whether by design or miscalculation. And I really don't see how this can be in any way resolved without some real concessions to Turkey on the part of the United States. So we wait with a great interest to see what the outcome of Tillerson's discussions will be in Ankara.

Joseph Camilleri is a managing director of Alexandria Agenda, Emeritus Professor at La Trobe University in Melbourne, and a Fellow of the Australian Academy of Social Sciences.

The views and opinions expressed by Joseph Camilleri are those of the speaker and do not necessarily reflect those of Sputnik.

US Remains the Main Agent of Chaos in Syria – Geopolitical Analyst