US Remains the Main Agent of Chaos in Syria – Geopolitical Analyst

The recent developments in Syria indicate that the US and its Middle East allies are trying to thwart the Syrian Arab Army's progress on the ground and maximize battlefield gains before upcoming peace negotiations in order to get the upper hand, geopolitical analyst Gilbert Mercier told Sputnik.

"We are reaching the seventh-year anniversary of the tragic conflict in Syria, which seems to evolve and get more complex as time goes on," Gilbert Mercier, a geopolitical analyst, author of "The Orwellian Empire" and editor-in-chief of News Junkie Post says.

Could Russia Play the Role of a Broker in the Israel-Iran Conflict Over Syria?

According to the analyst, the recent downing of an Israeli F-16 by the Syrian Arab Army — "which was the first time an Israeli jet was shot down for breaching Syrian air space" — could prompt further incursions on the part of Israel and "tit-for-tat retaliations against Israel by Hezbollah," resulting in the opening of a new front in Lebanon.

"Diffusing the simmering tensions between Israel and Iran/Hezbollah has become imperative to avoid the conflict becoming regional, and the only party that can broker such a deal is Russia, probably with the assistance of Turkey," Mercier told Sputnik.

© Sputnik / Hikmet Durgun
Erdogan Seeks to Prevent the Creation of Any Form of Kurdish Autonomy in Syria – Analyst
The author noted that "Israel is claiming that the provocation came from an Iranian drone breaching their airspace, and this is why the international community wants Moscow to put pressure on Tehran."

Both Tel Aviv and Tehran are beating their war drums over the recent incident, with Iranian official Ali Shamkhani, Secretary of the National Security Council, dropping the hint that "the era of hit and run is over" for Israel.

Tel Aviv and Damascus, which have yet to sign a peace treaty, regularly exchange tit-for-tat attacks. On February 7, Israeli fighter jets reportedly struck a target located in Greater Damascus. On November 1, Lebanese security service source informed Sputnik about an Israeli strike on a copper factory in the Syrian town of Hassia, in Homs province. Earlier, on October 21, Israel targeted Syrian artillery cannons in response to the reported shelling from Syria of the Israeli-held Golan Heights.

"Overall, while Bashar al-Assad's Syrian army is reclaiming territories on the battlefield, Israel and the United States are trying to derail the process and setting up shifting red lines," Mercier highlighted.

What is remarkable in the Syrian conflict, according to the analyst, "is that Russia, not the US, is the unquestionable broker because of its military intervention in 2015 and its role with Turkey and Iran."

"The Russian leadership role has to be assumed firstly within the Russian, Iranian, and Turkish coalition, and secondly in the context of regional consultations, most essentially with Israel.  Increased pressure should be put by Moscow on both Tel Aviv and Tehran to avoid further escalation," he underscored.

The author regards the recent developments on the ground, including the downing of a Russian Su-25 over Idlib province by the terrorist group Hay'at Tahrir al-Sham (the former al-Nusra Front) on February 3 and the US air strikes against Syrian pro-government forces in Deir Ez-Zor on February 7 as parts of one and the same pattern.

"[It] is obviously a way for the US and Israel to counter the substantial gains made by the forces of Bashar al-Assad on the battlefield," the geopolitical analyst emphasized, "It is also definitely an effort, from all parties, to maximize battlefield gains before potential peace negotiations, but it is overall a dangerous game. It seems that the West wants the Syrian abscess to fester indefinitely."

According to Mercier, "Syria's neighbors, such as Turkey, Israel, Lebanon, Jordan and Iraq, could soon come to realize that only a strongman like Bashar al-Assad can bring Syria out of its present chaos."

However, it appears that the West still cannot decide whether it wants Assad "to go" or "to stay," with mixed signaled coming from Washington and the countries of the European Union. "Should Assad stay or should he go is indeed one of the questions the different parties should agree upon," the author underscored. 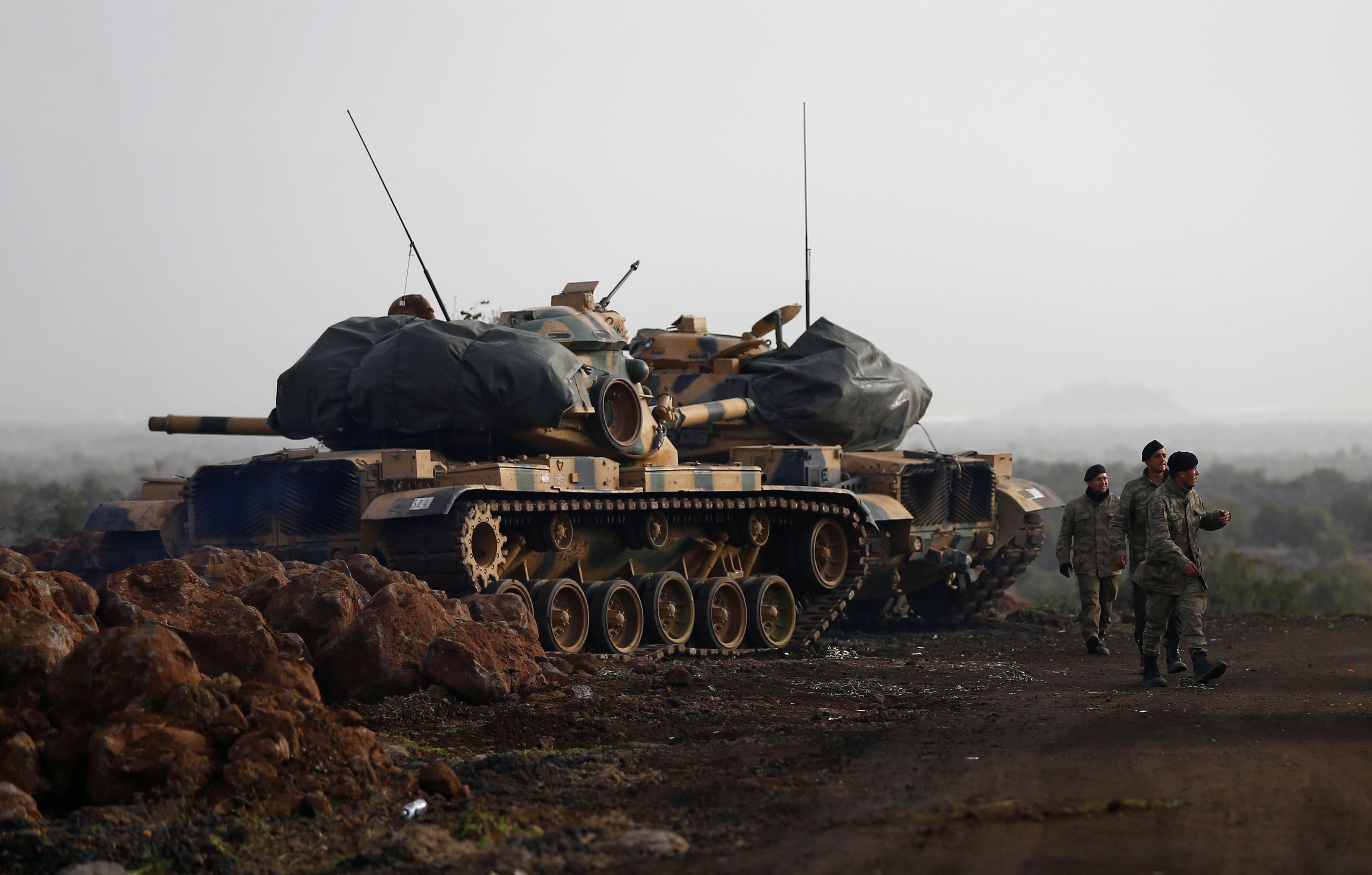 © REUTERS / Osman Orsal
Turkish soldiers and tanks are pictured in a village on the Turkish-Syrian border in Gaziantep province, Turkey January 22, 2018

Meanwhile, it raises questions why Turkey's military operation against the Syrian Kurds, somewhat ironically called "The Olive Branch," has not met fierce resistance from Damascus, in contrast to Israel's recent aerial attack.

"Turkey's military operation on Afrin, a territory controlled by Syrian Kurds, is an issue with the US, which happens to be, in a blatant contradiction, allied with the Turks in the context of NATO and also a sponsor of Kurdish forces which the US military views as their main foot soldiers in Syria," Mercier said, commenting on the issue. 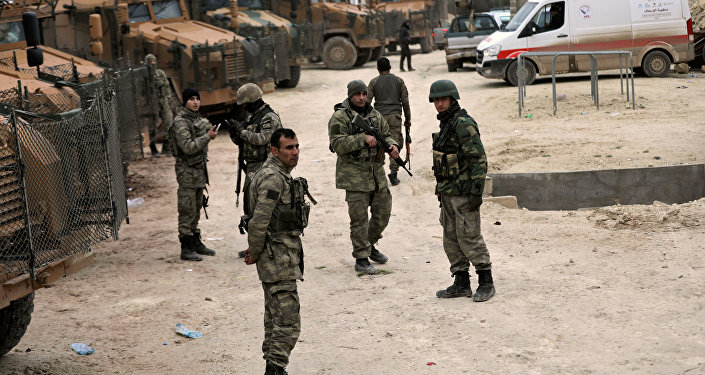 © REUTERS / Khalil Ashawi
The US Hand in Syria is as Weak as You Can Possibly Imagine – Analyst
The analyst suggested that "before launching his Olive Branch Operation, President Recep Tayyip Erdogan had consulted Moscow," and he suspects that "through the Russian channel, Bashar al-Assad was not only informed but actually understood that weakening the Syrian Kurds, allied on the ground with the Americans, was to his advantage."

"Let's not forget that Turkey, for decades, had no problems with the Assad dynasty's rule of Syria," the author remarked.

Although initially Ankara had sided with the Sunni Persian Gulf kingdoms and the US, which were "pouring gasoline on the fire by arming and financing proxy jihadists of all stripes to topple Bashar al-Assad," it reconsidered its foreign policy amid Washington's "increased coziness with the Kurds," the analyst noted.

He said that it seems that the Turkish president had ultimately "understood that forming a de facto coalition with Russia and Iran was not only in his country's interest, but also critical for a chance at regional stability." 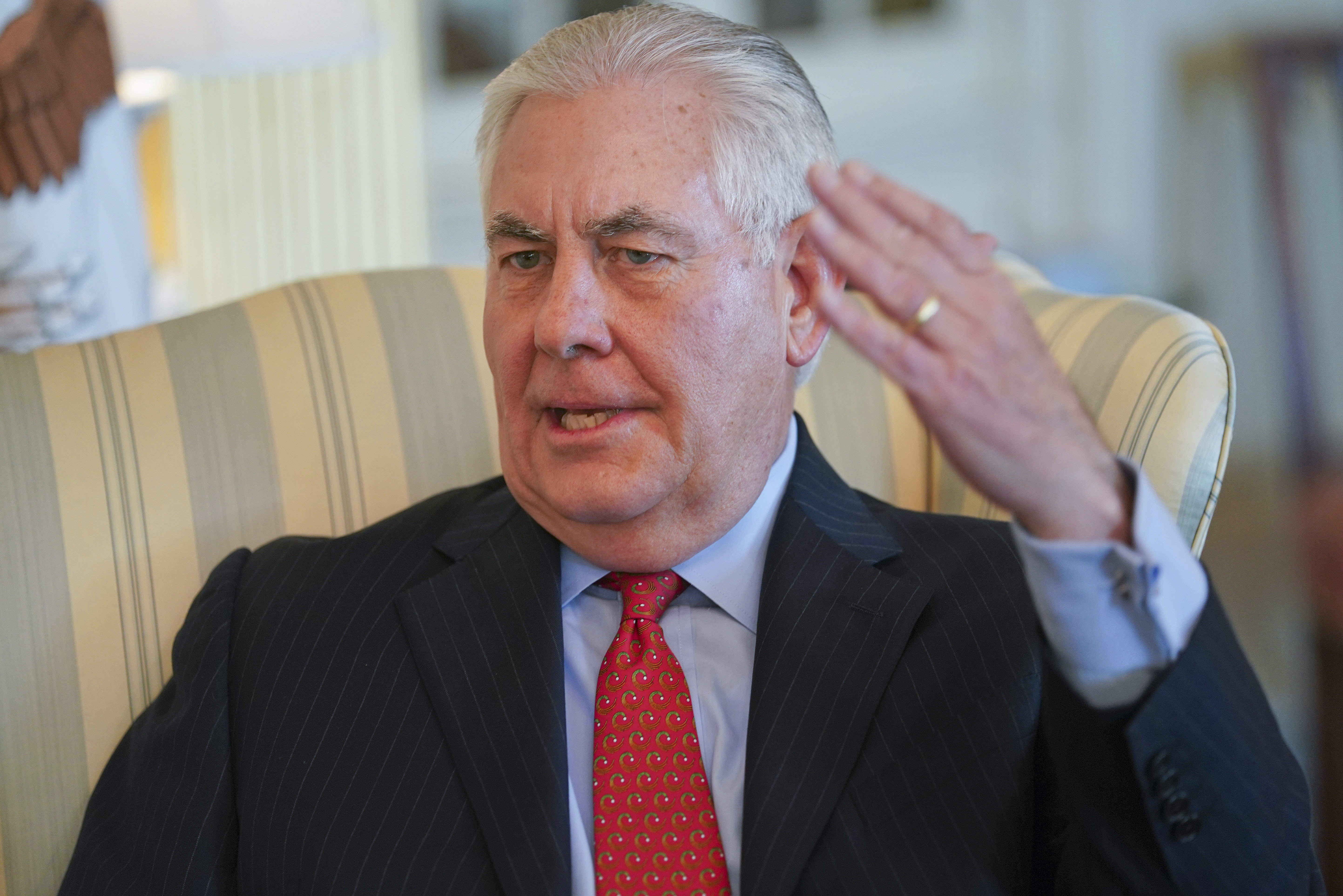 © AP Photo / Pablo Martinez Monsivais
Secretary of State Rex Tillerson gestures during a interview with the Associated Press at the State Department in Washington, Friday, Jan. 5, 2018

Orwellian Empire: The US Syria Narrative a 'Gem of Fake History'

According to the analyst, "arguably, the main agent of chaos in Syria, just like it has been in Iraq and Libya, was and still is the US."

"Despite the apparent schizophrenic aspect and inconsistency of US foreign policy, such as in the instance of Syria, being allied with Turks and Kurds who are enemies, the consistent element is that once the US military sets foot on the ground in a country it does become a permanent occupation. Officially, the Pentagon says that it has 2,000 troops in Syria; with black ops the real number could easily be 4,000," Mercier pointed out.

© Sputnik / Mikhail Fomichev
Anti-Russia Media Campaigns Aim to Diminish Sochi Congress Results - Syria Opposition Group
The author referred to a January 17, 2017 conversation between Secretary of State Rex Tillerson and Condoleeza Rice on US Syria policy at Stanford University. During his speech, the Secretary of State said that American troops would remain in Syria even after their fight against Daesh (ISIS/ISIL) is over to ensure that "neither Iran nor Bashar al-Assad take over areas that have been newly liberated with the help of the US."

"Tillerson called the Assad administration as well as Iran 'malignant'. His narrative was full of lies and straight out of the neocon lexicon: blatant lies about Assad originally sponsoring ISIS (Daesh) and al-Qaeda; lies and arrogance about the Trump administration claiming credit for the defeat of ISIS in Iraq and Syria," Mercier stressed.

The geopolitical analyst brought into focus Tillerson's statement that "illustrates well the completely false US narrative on Syria." He summarized the American viewpoint: "for nearly 50 years the Syrian people have suffered under the dictatorship of Hafez al-Assad and his son Bashar al-Assad. The nature of the Assad regime, like that of its sponsor Iran, is malignant. It has promoted state terror and empowered groups such as al-Qaeda."

"Never mind fake news, this is a gem of fake history!" Mercier highlighted. "But let us judge US imperialism by what it does, not what it says. Look at Afghanistan, Iraq, Libya, Syria and Yemen: beyond its web of lies the Orwellian Empire is in the business of engineering failed states either directly or through proxies."

The views and opinions expressed by Gilbert Mercier, Ekaterina Blinova are those of the contributors and do not necessarily reflect those of Sputnik.