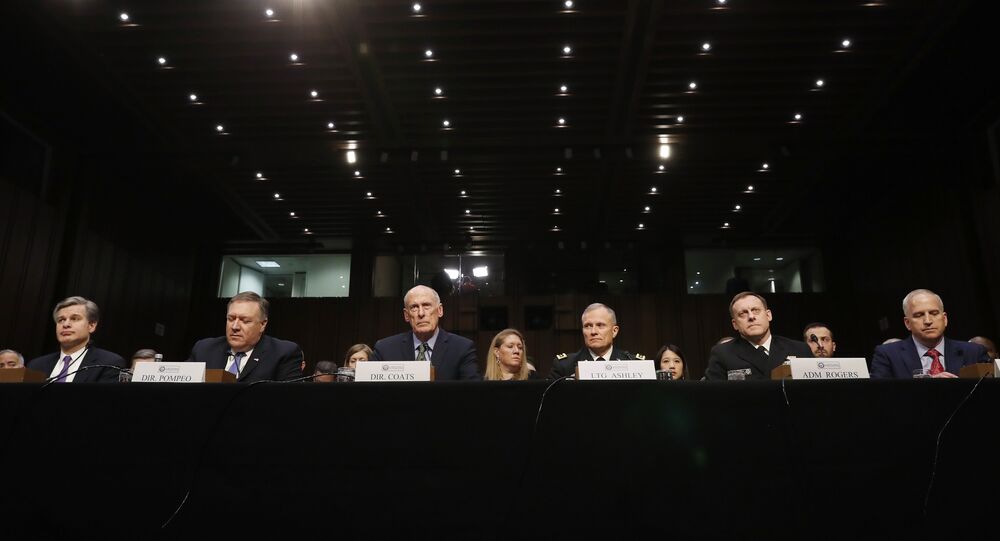 The leaders of the US intelligence community delivered landmark testimony before the Senate Intelligence Committee on Tuesday and the many hours of statements have given the public a glimpse into Washington’s priorities and goals in a tumultuous time.

Brian Becker and John Kiriakou of Radio Sputnik's Loud & Clear interviewed three guests on the testimony: Medea Benjamin, co-founder of CODEPINK, a feminist progressive grassroots organization; Bill Binney, a famous whistleblower who spent 30 years with the National Security Agency (NSA) before leaving the agency over what he has described as its "totalitarian" approach to surveillance; and Ajit Singh, a Marxist and anti-imperialist writer and activist.

​"I was surprised to hear, for example, [Director of National Intelligence] Dan Coats said that the US deficit was a threat," said Benjamin. "That was something very new — of course, nobody followed up and asked if the deficit is a threat — [if] the US military budget is almost 16 percent of our discretionary funds, then isn't the military budget a threat?"

Benjamin continued narrating the proceedings, adding that a major theme of the testimony was a pivot in US foreign policy where the main threats were no longer Islamic militant groups such as al Qaeda and Daesh but instead great powers such as China and Russia.

"Then Marco Rubio (R-FL) came out saying that he thought the biggest threat to the US was China and went on to talk about how China wants to overtake the United States as the superpower. There was quite a lot of talk about that, with a conclusion by Mark Warner (D-VA) saying that the US now has the greatest military equipment that money could buy, but it's the wrong kind of equipment to fight the wars in the cybersecurity issues that we are now facing today."

Becker brought up a quote from Sen. Angus King (I-ME), who during the testimony called for the development of a doctrine of retaliation as a deterrence against future cyberattacks, and asked Binney what he thought of such an idea.

"[US intelligence agencies have] had thousands of attacks that they've known about and weaknesses in systems that we currently use, and they've never fixed them," Binney replied. "And because they've never been fixed, we've all been vulnerable. I've always maintained they should have fixed the problem they knew about first and then if we get attacked, then there'd be a much simpler way of of addressing the attack or the new weaknesses."

"They're keeping us insecure in cyber and they're trying to trying to swindle us out of more money to do things like create a bigger military or other kinds of budget increases and so on. Until they really start being honest with us and start fixing the problems they know about, we're all being strung along."

Becker then asked Singh about China, a nation mentioned numerous times in the hearing, and why Washington feels so threatened by the emergence of Beijing as a rival.

© CC0
Sorry, Mideast: US May Reportedly Hurl All Efforts Into East Asia to Counter China

"The Trump administration has demonstrated consistently that it [considers China to primarily be a threat] economically," Singh replied. "It's been concerned primarily with combating, via protectionist policies and so-called 'America First' strategic orientation, technology transfers with the Chinese."

"It also seems to be concerned with the growing competitiveness of Chinese state and private corporations internationally, relative to American corporations and I think it's concerned with the role that China's international economic relations are playing in terms of growing diplomatic relations and rapprochement with countries around the world — most noticeably through China's signature Belt and Road initiative, which has already received cooperation with over 70 countries in 1,700 different development projects."

"Those are the three main factors of what the United States is concerned with here. The United States has been mired for decades in economic stagnation and recession and I think it's becoming increasingly attuned towards its declining dominance and declining power relative towards China. The United States doesn't seem to be able to impose its will on other countries quite to the same degree as it has previously and one aspect of the Trump administration's strategy has been military buildup in Asia."