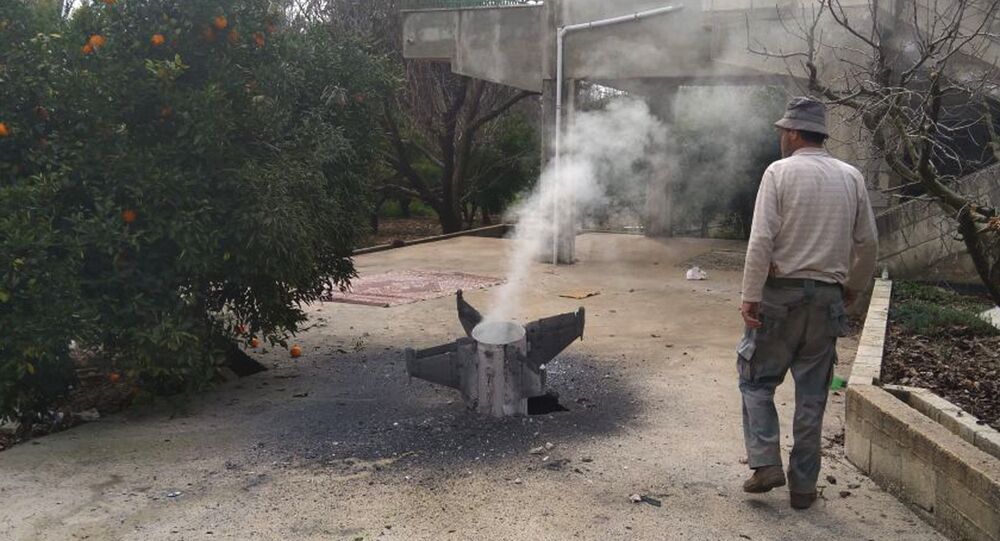 On Saturday, the Israeli army said its helicopter intercepted an Iranian drone launched from Syria and that the Israeli Air Force (IAF) struck Iranian targets in Syria. The Israeli moves prompted fire from Syrian air defense systems, resulting in an Israeli F-16 fighter jet being hit. In the second wave of the attack, the Israeli forces struck 12 targets in Syria, including Syrian air defense batteries and Iranian military facilities, the country's Defense Forces (IDF) said.

READ MORE: 'We Do Not Accept Any Restrictions' in Syria - Israeli Defense Minister

After the attack, Israeli Prime Minister Benjamin Netanyahu said on Sunday that Israeli forces had landed hard blows on the forces of Iran and Syria, and that this showed a consistency in the country's modus operandi concerning military matters.

Yakov Kedmi, a former high-ranking Israeli intelligence official, told Sputnik that this escalation by the Israeli forces was part of a planned operation but was also in response to a situation that had gone out of control and that Israel will now have to take more care as to how it reacts to any further violations, whether intentional or otherwise, that it perceives in Syrian airspace.

"The escalation in Syria is more of a result of nervous pressure and the result of the fact that the situation has gone a little out of control in Israel itself ... Israel should take the following conclusion from [the attack]: there needs to be a more reasoned reaction to such violations, and there should not be a giving in to an instinctive reaction. Secondly, it is uncertain how Israel will now act in Syrian airspace. I think, that this will be reconsidered and our actions will be more careful and reasoned," Kedmi said.

Israel has confirmed its intention to continue responding to any attacks with the use of force. Netanyahu stated on Saturday that Israel will not seek war, but will defend itself from any attacks and the presence of Iranian military forces in Syria. He added that Iran was aiming in the end to use Syria’s territory for its aggression against Israel.

Tarek Ahmad, a foreign policy spokesman of the Syrian Social Nationalist Party, believes that instead of defending its actions, Israel should view the destruction of its F-16 jet as an incentive to maintain Syria’s sovereignty.

"The downing of the Israeli plane, of course, is a big success for the Syrian army and self-defense. This is a signal for Israel to rethink their policy of violation of the sovereign borders of Syria," Ahmad said.

Countries Need to Look to Russia for De-Escalation

According to IDF spokesman Conricus, there has been no comment on whether Israel had contacted Russia to notify about the airstrikes and the escalation of tensions.

However after Israel had struck the Syrian air defense batteries and Iranian military facilities in Syria, according to the Kremlin press service, Netanyahu and Russian President Vladimir Putin held a telephone conversation to discuss the situation. The press service stated that Russia spoke out in favor of avoiding any further confrontation in the region.

Aymenn Jawad Al-Tamimi, a jihad intelligence research fellow at the Middle East Forum think tank, believes that if Israel were to violate Russia’s calls to avoid further escalation and continue to conduct military operations in the regions, then all sides could be pulled into war.

"There is a possibility though that a future incident leads to an all-out war: not because either side necessarily intends it from the outset, but rather a spiral of escalation arising from mistakes," Al-Tamimi told Sputnik.

Ahmad stated that it is precisely Russia that should be the one setting the precedent in how to respond to the actions of Israel.

"There is no country rather than Russia to send a message to Israel that it should stop meddling in the Syrian conflict," Ahmad said.

The response of the United States was moderately different from that of Russia, as in a White House statement issued on Sunday Washington defended the right of Israel to defend itself from any attacks from Iranian-backed militias, and urged specifically Iran and its allies against further provocative actions.

Al-Tamimi said that the United States should work with Russia on this issue, instead of merely tolerating the actions of Israel.

"For now the U.S. is also tolerating Israel's actions. Indeed the U.S. is largely focused on other parts of Syria, but in my view as well it would be helpful for the U.S. to work with Russia on this matter," Al-Tamimi said.

Russia and Turkey, along with Iran, are guarantors of the ceasefire regime in Syria. Moscow and Ankara have also been providing humanitarian aid to the residents of the crisis-torn country.