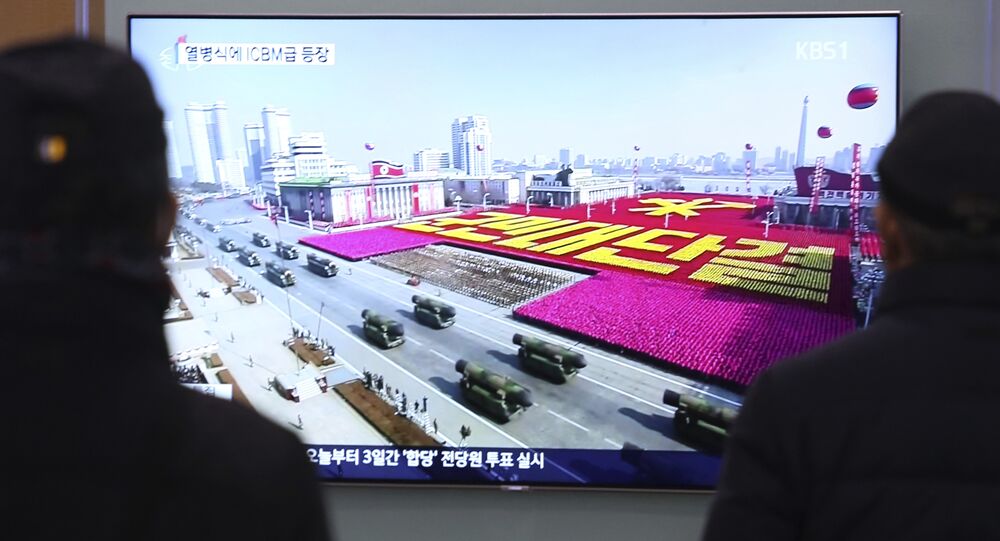 'A Message to Washington': The Rationale Behind N Korea's Military Parade

Regardless of what kind of snow is expected at the Games in Pyeongchang, Pyongyang's latest move indicates that the hermetic nation is determined to keep its powder dry.

The military parade in Pyongyang held on the eve of the South Korean Olympics was not as impressive and audacious as one would expect, but that didn't make it less significant. Despite presenting no new versions of intercontinental ballistic missiles, North Korea displayed a sufficient number of missile models already tested, thereby confirming its firm intention to assert its status as a nuclear power.

The annual parade this year marked the 70th anniversary of the foundation of the Korean People's Army (KPA) and a new series of postage stamps were released to celebrate the occasion. One of the stamps shows a serviceman wearing the uniform of North Korea's strategic forces, while two main stamps depict the image of Kim Ir-Sen (Kim Il- sung) during the historic parade on February 8, 1948, and the image of the parade along with the text and music to the anthem of the North Korean army. Another stamp shows “KPA servicemen endlessly devoted to the party,” according to North Korea's central news agency.

What was on show

The Missile Guidance Bureau was established on July 3, 1999 when several missile units under the KPA Ground Force Artillery Command were reorganized into a single missile force. They became known as the Strategic Rocket Forces in late 2013. Kim Jong Un referred to the service as the Strategic Rocket Forces for the first time in 2012, on a par with the ground forces, the navy and the air force, during his speech at an annual parade honoring the centennial year of Kim Ir-Sen's birth.

Thursday's parade in Pyongyang, apparently, was aimed at further enhancing the status of this force. As the Korean Central Television presenter said, as the missile columns were preparing to pass, which is traditionally the highlight of the whole event, “The Strategic Rocket Forces are the symbol of the military power of the Democratic People's Republic of Korea.”

Hwasong-14 on a trailer pic.twitter.com/Fg7iFeIuPB

Missiles and tanks rolled into North Korea's historic Kim Ir-Sen square, where the main achievements of recent year were on display: the medium-range Pukguksong-2 missiles and the intermediate range Hwasong-12 missiles. Of course, the stars of the show were the Hawsong 14 and Hwasong-15 missiles that were first tested in July and November of last year.

At the same time, experts noted that North Korea hasn't yet learned to build its own TEL (Transport Elevator Launcher) vehicles and still seems to be refitting the WS-52100 vehicles imported from China back in 2011 for their missiles.

#NorthKorea Telling TELS – Today their new and successful tested ICBM were one parade but only the four Hwasong-15 were on TELs (Transporter, Erector, Launcher) with the Hwasong-14 on towed trailers pic.twitter.com/NEXhK5mwM2

“Today's parade demonstrates the power of the Democratic People's Republic of Korea, which has reached the level of the world-class military powers,” the North Korean leader said. “We need to ensure that no aggressors would even dare to mock the dignity of our sacred homeland or encroach upon its sovereignty, even by one thousandth of a millimeter… As long as imperialism is present on the Earth and US's hostile policy against North Korea continues, the mission of the Korea People's Army to be the strong sword that protects the country and people, and peace can never change,” North Korea's leader proclaimed.

This is Kim Jong Un delivering a speech to rapturous applause. pic.twitter.com/N7gvV43LQW

That 'sword' in this case, of course, is the strategic missile forces. The South Korean Defense Ministry estimates their number at only 10 thousand people, but they can protect the country form any external invasion, and as Pyongyang expects, save money on the development of conventional weapons and the maintenance of an army of more than a million. These saved funds can be put towards Kim Jong-un's other stated objective — raising the standard of living of the North Korean population.

Why the timing of the parade?

Holding the military parade on the eve of the Olympic Games in Pyeongchang can't be seen as a desire to spoil the “holiday of peace” of their southern neighbor or to once again threaten the Americans and the whole world. This is only a confirmation of Pyongyang's policy of simultaneously developing the civilian and the military sectors. While the athletes will be defending the honor of their homeland at the Olympics, the military should “always be ready to immediately inflict a retaliatory nuclear strike.”