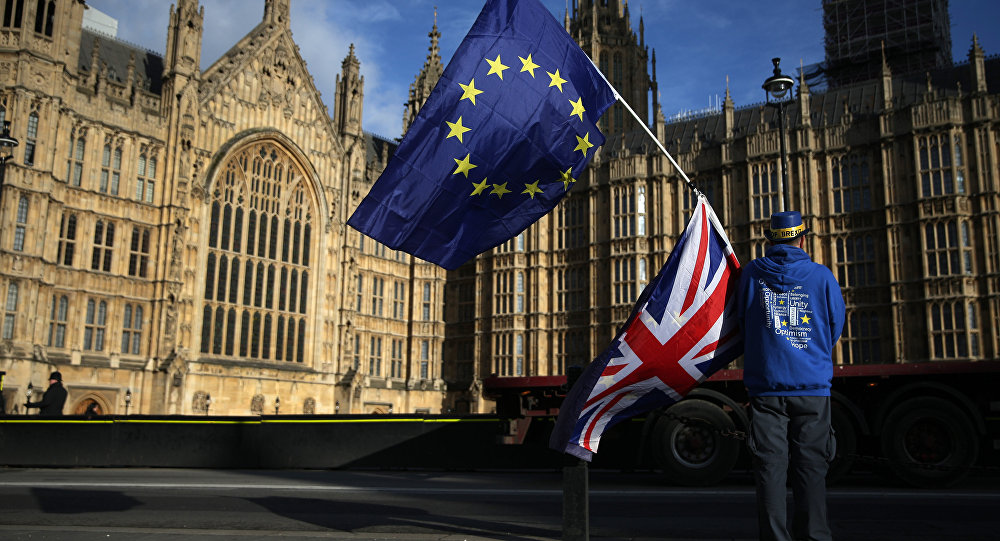 Britain Must Play by EU Rules Over Brexit Transition or Else, Analyst Warns

Britain is being totally unrealistic if it thinks it can continue to enjoy the benefits of the single market during the Brexit transition period as the European Union flexes its muscles by threatening to take a tough stance, an influential UK political commentator has revealed.

The UK now faces a stark choice over its future position after leaked legal documents from Brussels hinted it will seek powers to block Britain if it refuses to accept or administer new laws and regulations during the two-year split.

In an interview with Sputnik, Adam Garrie, a leading political analyst and director of Eurasia Future, admitted he was not surprised by the latest hardening response being instigated by the European bloc as discussions move into the next phase.

"The EU has always maintained the legally sound position that during any transition period Britain would have a Norway style relationship with the EU wherein the UK would be subject to EU law in exchange for access to the single market/customs union. There is nothing remotely exotic about this," he said.

Anyone think it an interesting coincidence that the day Barnier sets out the EU's position on UK's #Brexit transition period, the UKGovt's 'impact assessment' papers are leaked, showing all scenarios to be disasterous (plus demonstrating ScotGov's published analysis was bang on)?

Mr. Garrie questioned how some political figures in Britain actually believed they could do as they please during the transition period.

"The only surprise is that many in the UK must have presumed that they could violate EU rules while still enjoying the benefits of an extended soft-transition period," he explained.

"This simply goes to show that the UK position of trying to have its cake and eat it too, is totally unrealistic," the commentator added.

Ultimately it now boils down to a choice of three things for Britain, Mr. Garrie said, to continue with its EU membership, or opt for a similar agreement to the one afforded to Norway and Switzerland. The third would be a full hard Brexit which would see the UK's relationship with the EU reduced to that of Canada, Belarus or Morocco

Even the Dutch have assessed UK's Brexit impacts
& surprise surprise, they come out the same as ScotGov's and the leaked UKGov papers too.
UKGov now know they are sitting on an Independence timebomb.
— watch our Scots EU citizens right to vote post Mar2019https://t.co/VS9ONxk5Az

Play by Our Rules

According to the leaked papers, European leaders want to prevent Britain from making challenges against the EU rules in the European Court of Justice. There are growing fears within Brussels that Britain will attempt to twist the law and regulations to suit its own needs.

Having the option and power to suspend the UK via sanctions, however, would seriously impact on financial services, the trade of goods and even agreements with airline operators.

Defending the move, Stefaan De Rynck, the advisor to EU Brexit negotiator Michael Barnier, said everybody must play by the same rules.  "Foreseeing possibility of sanctions for foul play is of course part of any agreement," he tweeted.

The five-page draft warned London, the UK should "abstain from any action or initiative which is likely to be prejudicial to the EU's interests.

It did not elaborate on what the sanctions could be, although it is thought they could include tariffs on goods, the enforcement of custom checks and the suspension of the single air aviation agreement.