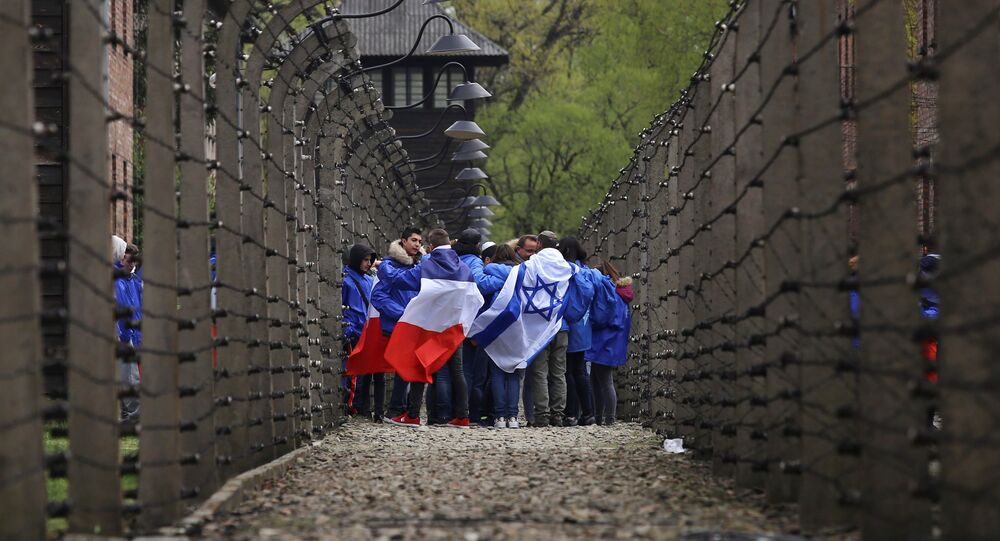 Poland has been criticized by the US and Israel after the country's President signed into law a bill that imposes jail terms for suggesting the country was complicit in the Holocaust, it also provides punishment for "crimes of Ukrainian nationalists."

On Tuesday, Polish President Andrzej Duda signed amendments to the law on the Institute of National Remembrance, or the so called Holocaust bill. The new amendments impose jail terms of up to three years for suggesting the country was complicit in the Holocaust, or using the phrase "Polish death camps."

Israel says the law will curb free speech, criminalize basic historical facts and stop any discussion of the role some Poles played in Nazi crimes.

Rekas noted that the US and Israel are now acting deliberately.

"The Israeli side is well aware of the history of World War II and also knows that this law, even in a minimal sense — although is stupid — is not aimed at Israel or the interests of Jews around the world. And yet, Benjamin Netanyahu condemns Poland, taking advantage of the fact that Poland has no one to turn to and is not protected from the world's existing narrative of combating "universal" anti-Semitism. As a result, Poland has been cornered. And we, unfortunately, deserve this after many years of foolishness of our leaders," the politician said.

The amendment to the law also includes punishment for "crimes of Ukrainian nationalists." The Polish parliament at the end of January backed the legislative amendments to introduce prison terms and fines for people who support the so-called "Bandera ideology" and those who deny crimes committed by Ukrainian nationalists against the Poles.

READ MORE: France Blasts Poland for Holocaust Law: 'You Should Not Rewrite History'

Konrad Rękas told Sputnik that he doesn't believe that legislative acts will help in establishing the historical truth.

"Unfortunately, these amendments are fatal, because it's impossible to establish historical truths through criminal laws. This always leads to abuse, always leads to unresolved circumstances. This always puts before the courts and prosecutors the task of deciding what is and what is not, a prohibited action. So it's impossible to regulate ideological and historical problems this way. It was fatal to combine these two issues — punishment for Bandera (Ukrainian nationalist) ideology — with other issues."

The bill isn't just harmful for Ukraine, but for Poland itself according to Rękas.

"I have no illusions about the amendments, because they don't solve anything in the Polish realities. This doesn't change anything strategically in Poland's policy. This means that Poland will lend power in Kiev. Of course, depending on what directions it will receive from Washington."

One of the factors contributing to Polish-Ukrainian tensions is Ukraine's own policy, Rękas noted.

"The behavior of the Ukrainian side is also a factor, the demonstrations throughout Ukraine in recent days, these unprecedented attacks on the Polish consulates, these statements of chauvinistic organizations in Ukraine as well as statements of all representatives of the Poroshenko team, who clearly say that Ukraine should be ready to fight on two fronts. Not only in Donbass, not only with Russia, but also with Poland."

The new amendments also criminalize the denial of the murder of about 100,000 Poles in Volhynia by units of the Ukrainian Insurgent Army (UPA) during World War Two and outlaw support for the actions and ideology of the Organization of Ukrainian Nationalists (OUN). Rękas believes that Ukraine needs to stop its nationalism.

READ MORE: Israeli-Polish Ties Will Not Be Spoiled by Holocaust-Related Row- Analyst

© REUTERS / Kacper Pempel
Polish President Says He Would Never Allow Poles to be 'Vilified' Over Holocaust
"There were remarks that Volhynia (the Volhynia massacre of Poles 1943-1945 by ukrainian nationalists) can and should be repeated using the Ukrainian minority in Poland. All this means that Nazism is not a historical, but a current issue in Ukraine. And that's good, otherwise somebody might say: "Well we have added a ban on Bandera ideology to the law and solved the problem", no we haven't. The problem of nationalist ideology will not be solved until it's suppressed in Ukraine. Nazism wasn't suppressed by any political statements. It was necessary to put the Soviet flag on the ruins in Berlin to do that. The same should happen with the Bandera ideology. Until Kiev is liberated and the last red and black flag is burned on the streets of Kiev and Lviv, the issue of nationalism won't be solved."

During World War II more than three million Jews who lived in pre-war Poland were murdered by the Nazis, accounting for about half of all Jews killed in the Holocaust. The Nazi regime built some of the most notorious concentration camps on Polish soil, including Auschwitz, Treblinka and Belzec.

The views and opinions expressed in this article are those of the commentator and do not necessarily reflect those of Sputnik.