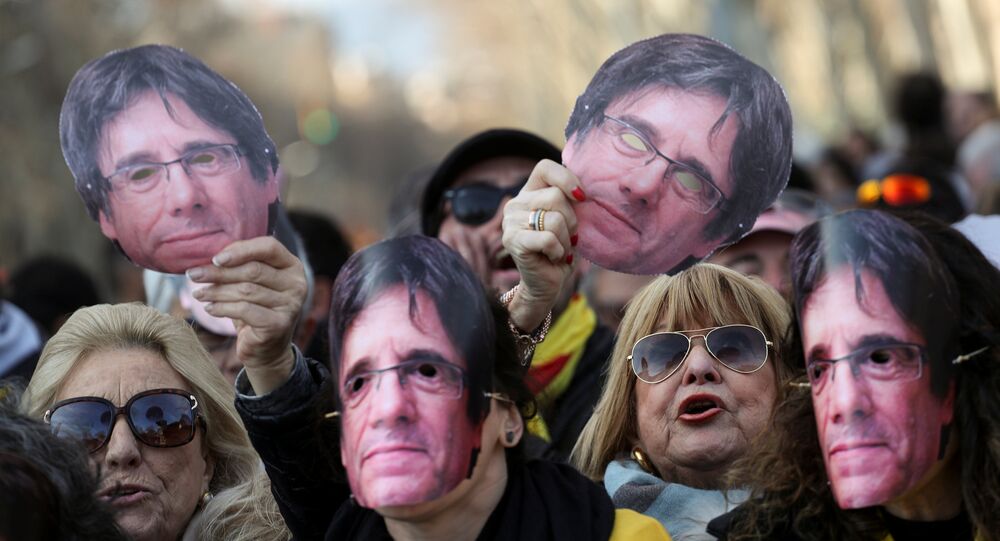 The vote for the new regional head of the Catalonia parliament has been postponed as former leader Carlos Puigdemont is still in self-exile. Sputnik spoke to Dr Andrew Dowling, Senior Lecturer in Hispanic Studies at the University of Cardiff, about the latest developments and what it means for the future of the region.

Sputnik: There seems to be a standoff between the Catalan government and Madrid over who will be presidency. What’s likely to happen next then?

Andrew Dowling: Well I think the maximum the Catalan independence forces can hope for is somehow they achieve a mechanism of appointing as President temporarily Carlo Puigdemont because it’s almost impossible that he can officially recognised as the President of Catalonia. It’s going to be very difficult to even achieve that mechanism because the Spanish Supreme Court is currently making a judgement that it’s due to give any day now on whether that mechanism is possible.

I think so far its advantage Madrid, its advantage with the government of Madrid and it does seem highly unlikely I think at this stage now that Carlos Puigdemont is going to be successfully reappointed as President of Catalonia.

Sputnik: Without a presidential candidate then could we see yet another round of elections?

Andrew Dowling: Yes and I mean the people surrounding Puigdemont and his allies are happy if you want to see further elections, but the problem is actual pro-independence forces in Catalonia are internally divided. Some people think the most important thing is to regain control of their own regional government, where as other people think and particularly around Puigdemont, think the real goal should be to make Spain internationally embarrassed, continue to put pressure on Spain and that should be the goal of the independent forces which will include the calling of new elections. The clock is ticking, they’ve potentially got two months before they have to call elections. I think it’s definitely risen up the scenarios that we may see elections taking place again.

Sputnik: Do you think the Puigdemont could ever return and lead Catalonia to independence?

Andrew Dowling: I think the independence movement really hasn't grown since 2015, I mean essentially in the elections in December 2017, they replicated the result they had in September 2015, which was 47.5% of Catalans voted explicitly for Pro-independence forces. I think until they reach a higher majority of Catalans, well above 50%, I think it's almost impossible for them to achieve independence in the foreseeable future, partly because it's been absolutely clear in the past two or three months that Catalonia has no international support.

The parliament declared independence on the 27th of October but not one country in the world recognised that declaration. So they've got problems in that they haven't got what's called a social majority, a clear majority of the population in favour of independence and they haven't got any international support. I think for the next two or three years an independent Catalonia is a very low probability.

The views and opinions expressed by Andrew Dowling are those of the speaker and do not necessarily reflect those of Sputnik.