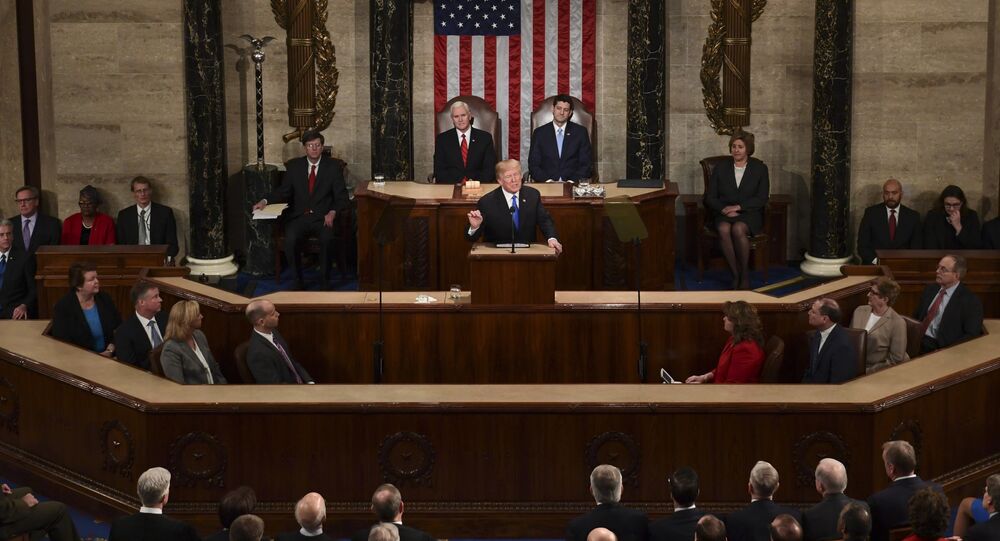 At Tuesday's State of the Union address, President Trump warned that he would put "maximum pressure" on North Korea, and not repeat the "mistakes of past administrations" over Pyongyang's nuclear program. Dr. Andrew O'Neil, DPRK analyst at Australia's Griffith University, spoke to Sputnik about which of Trump's rhetoric was worth taking seriously.

Sputnik: In his State of the Union address, President Trump stressed that the US must revamp and modernize its nuclear arsenal, but also said that he hopes the US would never have to resort to using it. What are your thoughts about this statement? How worrisome is it in context of the tensions between the US and North Korea?

Andrew O'Neil: It's important to emphasize that President Trump and his administration have veered between quite combative rhetoric on North Korea, and at other times have embraced a rather conciliatory position to North Korea. I think what we saw with Trump's State of the Union address was the more combative side of the administration's position.

© REUTERS / Leah Millis
'Max Pressure' on N Korea and Other Highlights of Trump's State of the Union Address
We know through some fairly reliable media reports that there has been a significant amount of debate within the administration and within government agencies over the merits and potential costs of a limited military strike on North Korea. So I think what we saw in Donald Trump's State of the Union address could be read as setting the groundwork for a military strike against North Korea.

On the other hand, the president has used a lot tougher rhetoric in the past, so maybe we shouldn't read too much into it. [That being said], I think the president was fairly unequivocal that we are reaching a point now where he has to reach a decision one way or the other whether to strike North Korea, and one would have to say, judging on his rhetoric, and judging from all the recent reports, that the administration is probably moving closer to authorizing limited military action against North Korea's weapons of mass destruction.

Sputnik: During his speech, Trump specifically praised North Korean defector Ji Seong-ho. How much is that going to anger Pyongyang, and undermine the thawing of relations between Seoul and Pyongyang?

Andrew O'Neil: This could go one of two ways. The first is that Pyongyang chooses to ignore what was a fairly pointed, staged event by Donald Trump clearly aimed at angering Pyongyang and possibly driving a wedge between the South and the North.

On the other hand, a lot of US administrations make a point around human rights. There is a very strong human rights community in the United States. There is also a very strong evangelical community that Donald Trump at times has struggled to win over, and I think that parading this individual, a born again Christian, at a State of the Union address perhaps is aimed at cohering that community in favor of a military strike against North Korea.

"Seong-ho, I understand you still keep those crutches as a reminder of how far you have come." Pres. Trump recognizes North Korean defector during #SOTU; Ji Seong-ho hoists crutches in first lady's gallery box as he is met with ovation #POTUS #NoKo pic.twitter.com/VDxeCxyEgQ

We don't know for sure. We simply don't know what President Trump is thinking. We know what he's saying, but again, I think that what the record shows is that talk is pretty cheap. The administration has floated a range of options publically, but it doesn't mean it's actually going to launch military action. That would be a significant step.

What I think is risky is if the North decides to undertake further tests, and to potentially deploy a mobile ICBM system. I think then we would basically be on the cusp of war. If that did occur, I think Trump would have no choice to convert his rhetoric into action.

Sputnik: Some commentators who watched the State of the Union speech have said that in many ways, Trump seemed to be posturing himself in ways similar to the posturing that we saw prior to the invasion of Iraq. To many people, a lot of this stuff sounded very much like a hint about regime change. Did you get that impression at all?

Andrew O'Neil: I think yes, of course. There's the possibility that he is trying to soften up the US public for a war, for regime change.

On the other hand, this is one more statement in a long line of combative statements since Donald Trump came into office in January of last year. It's also important to understand that he's coming out with a range of conciliatory statements toward the North as well. So he's pulling passive aggressive levers in an effort to what he thinks will manipulate Kim Jong-un's perceptions of him as being a strong, resolute leader who won't compromise or negotiate, as Obama and previous presidents did.

© REUTERS / Carlos Barria
Different Day, Same Song: CIA Director Claims North Korea Months Away from Being Able to Strike US
The risk with that is that Donald Trump paints himself into a corner, and if the North does do something highly provocative, he kind of has to act. Otherwise, the credibility of his tough statements is at risk of being completely undermined.

Whether he recognizes that or not, or whether he thinks that the tough rhetoric he's coming out with will deter and shape the North's behavior to be more compliant with Washington's wishes [is another story]. He probably genuinely believes that is going to happen. But the risk is that this may backfire, and he may have no choice but to undertake military action to uphold his own personal credibility.

The views and opinions expressed by Dr. Andrew O'Neil are those of the expert and do not necessarily reflect those of Sputnik.

© AP Photo / Wong Maye-E
'True Identity': Pyongyang Slams US as 'Gross Violator of Human Rights'
In its annual report on US human rights violations, released to coincide with President Trump's speech, North Korea accused Washington of "kicking up the human rights racket" but failing to "camouflage its true identity as the gross violator of human rights." Pointing to social and economic problems in the US including "racial discrimination and misanthropy," the report claimed that working —class Americans faced job loss, the loss of their homes, and soaring medical fees, while the Trump administration's policies have served "the interests of a handful of the rich circles."

The US State Department issues its own annual reports on human rights around the world, regularly ranking North Korea among the world's worst offenders. In his tribute to Ji Seong-ho on Tuesday, Trump said that the defector's "great sacrifice is an inspiration to us all," as the hall greeted Ji with a standing ovation.