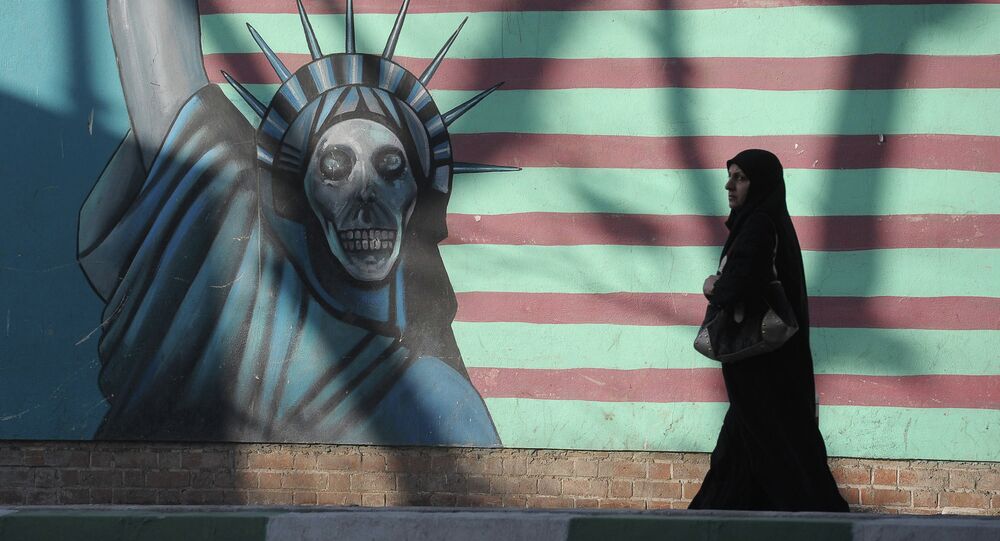 Iranian experts told Sputnik the US’ new “Kremlin Report,” which names the associates of top ranking Russian officials and businessmen in an effort to end their interactions, is “stupid” and “a violation of international law.”

The US Treasury has published the so-called "Kremlin Report" — a list of Russian citizens connected to Russia's top officials. It includes 210 names: 114 politicians and 96 businessmen. The publishing of this document is an unambiguous signal from Washington: "stop any cooperation with the Kremlin." The demand has been issued not only to Russian political and business elites, but also, potentially, to businessmen from the EU who have shown "inappropriate" doubts about putting pressure on Moscow.

© Sputnik
Simonyan Criticizes US 'Kremlin Report' as 'Incompetent, Clumsy, Stupid'
In an interview with Sputnik, Hossein Sheikholeslam, head of the Iranian social organization "Freedom to Holy Jerusalem" and a former adviser of Iran's minister of foreign affairs, said that such actions by the American establishment show the US is willing to violate international law for their own benefit.

"The Americans have chosen a very stupid approach — to act against all international norms and laws. Instead of following a policy of widening and deepening friendly ties, peace and stability, they have chosen the path of aggression, intervention, scandal and conflict-mongering, confrontation and destabilization of situations. They believe that such actions are going to be effective — that is, by applying sanctions, the Americans can reach their target. They are mistaken," he said.

"If their sanctions were that effective, they would have been able to destroy Iran. But that did not happen. On the contrary, the sanctions stimulated the development of our country. Iran has become much more powerful as a result of these US sanctions, becoming a powerful regional player. Even more, those areas that were most affected by the US sanctions managed to develop despite all expectations. This includes the Iranian nuclear program, military and defense program, missile program."

"I believe that sanctions are for the weak, for those who cannot fairly face challenges," Sheikholeslam continued. "This is medieval ignorance of people, devoid of logic. This is why, by analogy with Iran, I presume that the US will not achieve anything regarding [influencing the course of] Russian politics: the confrontation will only get stronger."

© AP Photo / Jacquelyn Martin, File
What You Need to Know About Washington's So-Called 'Kremlin Report'
Another Sputnik guest, Maryam Jalavand, an international law specialist and a teacher at Payame Noor University in Tehran, thinks that US actions towards 114 members of top Russian offices and leaders of companies, whose net worth surpasses $1 billion, are illegitimate and violate international law.

"It's a phenomenon of modern history — the emergence on the political arena of such a state as the US, which has chosen imposing sanctions and issuing demands beyond common sense as the key doctrine of its foreign policy. Up until today, the US has already imposed more than 61 varieties of unilateral sanctions on 35 countries. In the meantime, from the point of view of international law, such unilateral actions by the US towards countries such as Russia are considered a violation and a direct intervention in the country's internal affairs. Because, according to international law, imposing sanctions is a measure that forces one's counterpart to abide to certain restrictions, which creates a number of problems."

"The main question is whether international law sees the inclusion of state officials in some sanction list as the unilateral sanctioning of another state or as a purely independent measure," Jalavand continued. "The structure of the state is made up of persons, officials of various departments. Therefore, actions of such persons are viewed as actions of the state itself. The only exception is abuse of authority, of course — but this is definitely not the case. Inclusion of a large number of  top ranking Russian state officials in a so-called ‘list of enemies of the US' is a direct violation of international law because it involves such measures as freezing their assets. This, in turn, means freezing the assets and credits of the state.  This is the reason why such a measure from the US is considered a violation of international law.

The "Kremlin Report" was created in compliance with the Countering America's Adversaries Through Sanctions Act (CAATSA), signed by US President Donald Trump in August 2017. According to this law, the US Treasury was obliged to submit a report regarding anti-Russian sanctions to various congressional committees, in consultation with the Director of National Intelligence and the secretary of state, on January 29, 2018.