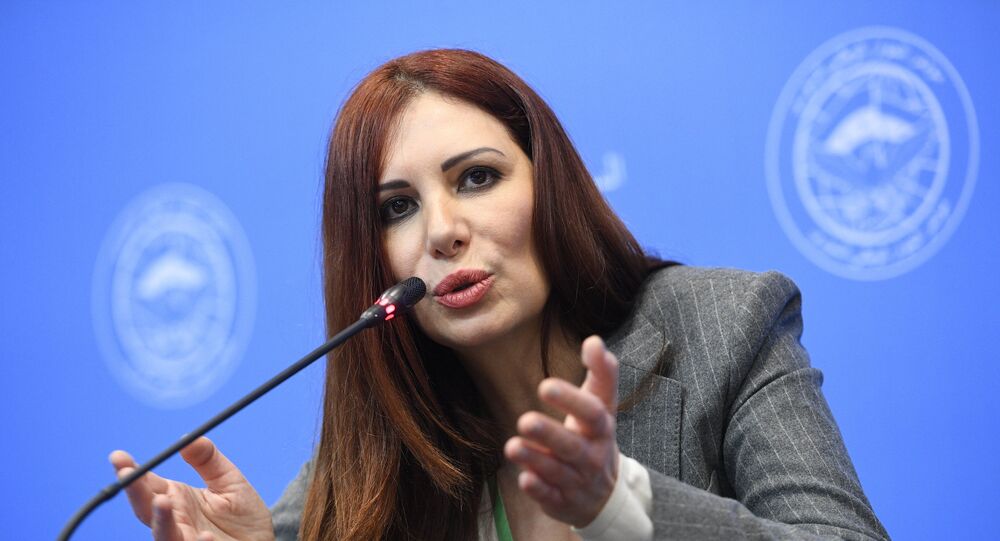 The Russia-hosted Syrian National Dialogue Congress in Sochi may pave the way to the resolution of the Syrian crisis, Randa Kassis, the leader of the "Astana platform" of the Syrian opposition, has told Sputnik, highlighting the necessity of the creation of the constitutional commission during the ongoing summit to facilitate the peace process.

Those who have come to the Syrian National Dialogue Congress in the Russian resort city of Sochi are motivated by patriotism and responsibility for the future of their country, Randa Kassis, the leader of the "Astana platform" of the Syrian opposition, told Sputnik Arabic, slamming those who snubbed the summit.

"Anyone who refused to participate in the Sochi congress is irresponsible," the politician highlighted.

According to Kassis, all the members of her delegation understand that the Syrian crisis could not be resolved under the aegis of the United States. The Syrians have to kick-start the process themselves, here, in Sochi, she stressed.

"We must continue to work despite numerous difficulties faced by the Syrian opposition," the politician said. "We must do everything to ensure the success of the Sochi talks."

© Sputnik / Nina Zotina
Presence of Damascus at Sochi Congress Means Willingness for Dialogue – Lawmaker
Kassis underscored that President Vladimir Putin's initiative to hold the Syrian National Dialogue Congress in Sochi is an important step, which, unfortunately, was not accepted by some political figures.

"If Vladimir Putin initiated something, it means not just the intention to do something, but the implementation of the objectives," she pointed out. "Therefore, I pin my hopes on the event and this is why we arrived in Sochi."

The politician emphasized that she had made efforts to gather as many representatives of the Syrian opposition as possible to form a working group. "We need to start finding the way out of the crisis immediately. I believe that it is impossible without the creation of a new constitution," she noted.

Speaking to Sputnik, Kassis shed light on the Astana platform's plans and program. The politician emphasized the necessity to create a "constitutional commission" within the framework of the negotiations.

"We need to start working on a new Syrian constitution," she said. "We have prepared our own draft constitution, on which we have spent a year working on."

© Sputnik / Nina Zotina
Russia's UNOG Envoy: Moderate Syrian Opposition Leaves Geneva for Sochi
According to the politician one of the most important issues concerning the future Syrian constitution is the maintenance of a secular state: "To clarify this issue I offered the following [definition]: the secularism is defined by the state's neutrality to religious or non-religious beliefs of a Syrian citizen," she said, "Beliefs could be not only religious, it could be views or a position and a person should have freedom [to express them]."

She noted that "in order to overcome the potential difficulties" she proposes "to introduce the fifth category — "a Syrian citizen" — without any religious references.

"It is necessary to give the Syrians the freedom of choice. A person may prefer to live in an exclusively secular legal field," Kassis suggested.

On January 30 the Syrian national dialogue congress officially opened in Sochi. The summit has brought together various opposition and pro-governmental forces, as well as representatives of the country's numerous ethnic and religious groups in order to facilitate the peace process with the focus on the Syrian constitution and elections.

The UN Security Council permanent members as well as Egypt, Iraq, Jordan, Kazakhstan, Lebanon and Saudi Arabia were also invited to participate in the event as observers. However, a number of states including the US and France, refused to attend, as did the Syrian Negotiation Commission (SNC) opposition group.

The views and opinions expressed by Randa Kassis are those of the speaker and do not necessarily reflect those of Sputnik.