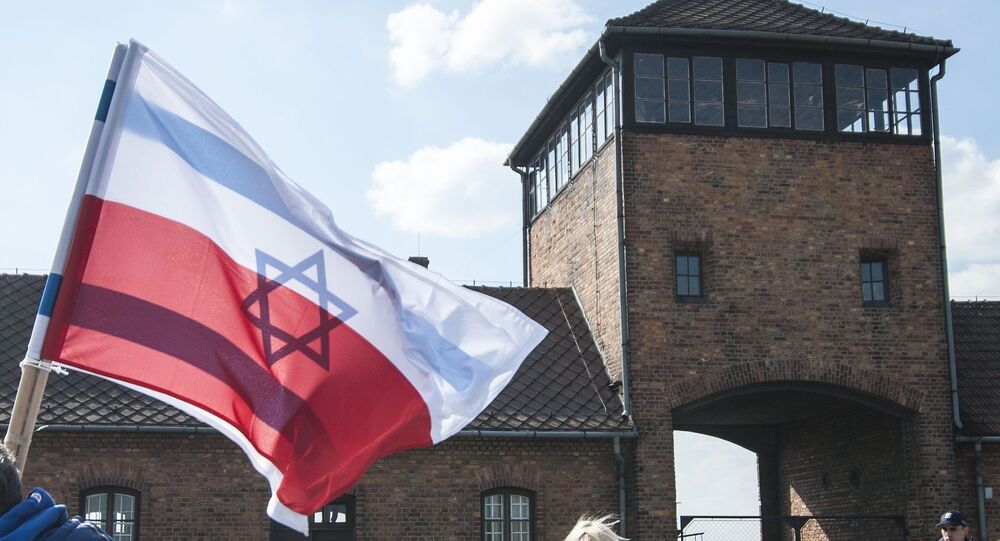 Israel has sharply condemned the adoption of a draft law on the creation of the Institute of National Remembrance in Poland. Anyone mentioning the words "Polish death camps," could be sent to prison for three-years. The bill will also punish those who blame Poland for crimes committed by the Third Reich.

Speaking to Sputnik, Leslaw Piszewski, president of Poland's Union of Jewish Religious Communities, said that when reading the draft law, "we have no doubt that it is unacceptable to talk about 'Polish death camps' because this is a lie."

He recalled that while there were "concentration camps" in Poland during the Second World War, the Polish state no longer existed at the time because of the occupation of the country by the Third Reich.

"If we read the document further, we will learn that people will face punishment if they, as if to minimize the guilt of the Third Reich, accuse the Polish state and Polish people of having taken part in the Holocaust. What vague language!" Piszewski noted.

According to him, it silences anyone who would like "to clarify some of the dark sides in the history of the Polish people."

"We, ourselves, have no doubts and there is enough evidence showing that there were Poles who killed Jews. I'm not saying there were many or few of them, but this is a historical fact. However, there are people in Poland who want to question these facts. And after the adoption of amendments to the law on the Institute of National Remembrance, people who want to write about all this are likely to be jeopardized by criminal penalties," Piszewski said.

He also pointed to the fact that the amendments, which were approved by the Polish parliament's lower house, were timed to coincide with the International Holocaust Remembrance Day.

READ MORE: Classified Documents Reveal US, UK Knew About Holocaust in 1942 But Did Nothing

When asked why there is still anti-Semitism in the world, Piszewski said that if could answer this question, "then maybe" he would have received a Nobel Prize.

Piszewski urged Polish authorities to condemn "any manifestations of anti-Semitism, xenophobia, racism, and lack of tolerance" to prevent uncivil behavior from certain parts of the population.

"President Andrzej Duda and Prime Minister Morawiecki strongly condemn anti-Semitism, but, as I have already noted, with delay. Although the Polish laws make it possible to punish people for their unseemly words and actions, for some reason such investigations come to naught," Piszewski concluded.

Meanwhile, Israel has summoned the Polish envoy to express its "opposition to the wording of the bill" as Duda stated that he would never allow his country and Polish people in general to be "vilified" through "false accusations" of the alleged involvement in the Holocaust.

Duda underscored that there was no institutionalized participation by Poland or its people in the Holocaust, while admitting that some Poles took "wicked" actions against the Jews.

The views and opinions expressed by Leslaw Piszewski are those of the speaker and do not necessarily reflect those of Sputnik.