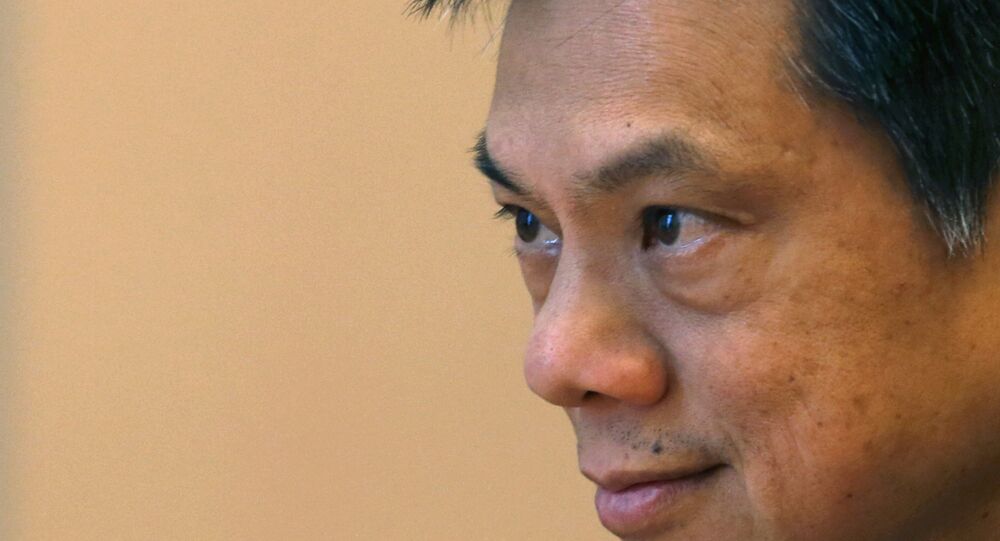 As a US State Department official, he caused a storm with his statements in the Balkans. When the EU demonstrated its feebleness, he persuaded the president of Macedonia to issue a formation of a government mandate to his ideological and political rival.

Deputy Assistant Secretary for European and Eurasian Affairs Brian Hoyt Yee was regarded as the voice "from there" in the region, but suddenly in January, reports emerged that he had resigned and might be appointed as an ambassador to either Bosnia and Herzegovina or Macedonia. Yee is no longer listed as an employee of the US State Department, but information on his appointment hasn't been confirmed, either.

Yee's other antics have included accusing Sputnik of using propaganda to undermine Montenegrins' trust in their system of justice, claiming Russia was pushing President of Republika Srpska Milorad Dodik to withdraw from Bosnia and Herzegovina and telling Serbia to hurry up and choose between Russia and the West.

Recently, Dodik told local television that Yee "lied to the media here when he said that he resigned, so as not to lose his credibility as 'a powerful statesman.'" According to Dodik, what Yee was saying in the Balkans had nothing to do with the policy of the new Trump administration in the US, and since he continued to pound away on the same line as before, he lost credibility.

© AP Photo / Ivan Sekretarev
Serbian FM Slams American Demand for Belgrade to Choose Between Russia, US
Historian Aleksandar Rakovic told Sputnik that Yee's policy toward the Balkans was destructive: instead of allying with the regional powers, he was turning them into the United States' opponents. Yee was acting from a position of strength while claiming that he was representing the US, but in fact he just took advantage of the vacuum.

Echoing US researcher Mike Gonzalez, Rakovic said that Yee's resignation must be linked to a document leaked in December 2017 from the office of US Secretary of State Rex Tillerson, in which a lot was said about US policy in Eastern Europe, particularly, that allies should be treated better than rivals.

"Brian Hoyt Yee will not likely be visiting [the region] again, except as a private citizen." Rakovic said. "He is the second person after [former Deputy Assistant Secretary of Defense] Michael R. Carpenter who tried to draw Montenegro into NATO. Just as Mike Gonzalez pointed out, Yee took advantage of the vacuum and continued to push forward the Clinton policy, but now that the vector of US foreign policy has changed, he is not welcome in the State Department. Probably, he resigned because he was disappointed. But it is unclear whether he resigned or was asked to leave," Rakovic said.

© AP Photo / Boris Grdanoski
Map of Divided Macedonia 'Expresses Aspirations That Existed for Years' - Expert
Obrad Kesic, a political consultant from Washington, said in an interview with Sputnik that the fact that Yee hasn't yet been appointed as an ambassador after leaving the State Department might indicate that he is being punished for the policy he was implementing because it didn't correspond with the interests of Trump's team.

However, Kesic noted that Yee is backed by Congress, which has a different understanding of foreign policy than that of the US president. This could mean that Yee will eventually get the appointment.

"To the best of my knowledge, he will be working either in Athens or in one of the Asian countries. If that doesn't happen, he will have to look for a job outside state service. Yee behaved in the Balkans just like local authorities allowed them to: he was regarded as deputy foreign minister of the US. In reality, he was on the bottom echelon in terms of ranking, contrary to what he was trying to show," Kesic told Sputnik.

He added that Yee was implementing the heavy-handed approach of the Obama and Bush eras, while Trump promised a completely different strategy.

The views expressed in this article are those of the speakers and do not necessarily reflect the official position of Sputnik.