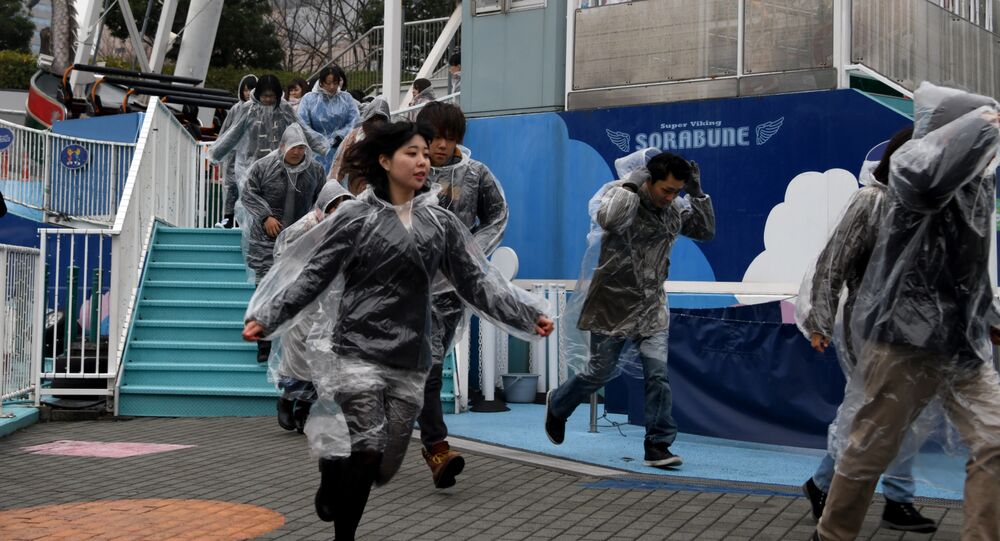 Japan is continuing to beat the war drums over a potential attack from North Korea. Speaking to Sputnik, analysts shared their views on the January 22 evacuation exercises in Tokyo and emphasized growing concerns among Japanese peace activists over the Abe government’s recent initiative.

The Japanese evacuation drills have clearly indicated that Tokyo intends to continue to use North Korea as a "bogeyman" for its civilians, Andrei Fesyun, a specialist in Japanese studies at the Russian Higher School of Economics, told Sputnik Japan.

"It is rather surprising that the exercises were held at a time when the North Korean threat has become less relevant to Japan due to agreements struck with the Democratic People's Republic of Korea (DPRK) on the eve of the Winter Olympics [in Pyeongchang]," the scholar pointed out.

According to Fesyun, the North Korean bogey is being exploited for certain political purposes, first of all, to keep Prime Minister Shinzo Abe's ratings high.

© AP Photo / Wong Maye-E
North Korea Calls for ‘Breakthrough’ for Unification in Unusual Message to All Koreans
The drill simulated a North Korea missile attack amid ongoing tensions over the hermit state's nuclear weapons program. Earlier, such exercises were held 26 times across Japan; however, it is the first time the drills have taken place in the country's capital, attracting the attention of the media.  Still not everyone in Japan hails the government's initiative: In response to the drills Japanese peace activist have launched protests criticizing Tokyo for the escalation of tensions in the region.

"I believe that those who oppose the drills are not right," Japanese lawyer Omae Osamu told Sputnik. "If you conduct exercises appropriately, they should benefit [the population]."

However, according to the lawyer, some important aspects have not been taken into consideration by the Japanese authorities, making the drills a "demonstrative" activity.

He noted that he "got the impression that the exercises were designed to lift the spirits of the participants and demonstrate this to the press." Omae pointed out that "the purpose of the exercises is to ensure that everything is ready for an emergency."

© AP Photo / Senior Airman Colby L. Hardin/U.S. Air Force
Japan Deploys First of Ten F-35A Fighter Jets Purchased From US - Defense Minister
"It may be found out that there are no safe hiding places or safe buildings where people can shelter. If in the course of exercises such shortcomings are revealed, they must be urgently eliminated. [However], currently such actions are not carried out during the drills," the lawyer remarked.

Russian political analyst Dmitry Verkhoturov echoed Omae's stance on the feasibility of the drills. He recalled that two of North Korea's missiles have already flown over the territory of Japan.

Verkhoturov specified that a nuclear explosion of 20 kilotons could inflict fatal injuries to a person located at a distance of 900 meters from the epicenter of the explosion. However, at a distance of 2300 meters the shock wave weakens, so that a person could escape it.

"The destructive power of a nuclear explosion is not unlimited, and it cannot destroy such a large city as Tokyo with an area of ​​2188 square kilometers," the analyst said. "If people are well-prepared, they will have a chance to take shelter [from the bombardment]."

However, Japanese peace activists believe that the exercised may only add the fuel to the fire: On the eve of the evacuation drills, a few dozen people gathered in front of the Bunkyo administration building holding the banners saying "No wartime drills," "Say no to evacuation exercises", and "Dialogue, not war".

According to Fesyun, although the Japanese attitude to the DPRK is sometimes excessively negative, there are people in the country who have openly called upon the government to hold dialogue with Pyongyang.

They express fears that Tokyo could provoke North Korea into further assertive actions, when it actually stopped its military activities.

© AP Photo / Ahn Young-joon
Seoul Worried US May Target North Korea in Preventive Strike, But Hurt All Peninsula – Ex CIA Korea Chief
This fact demonstrates that some Japanese have realized that the US is using North Korea to maintain tensions in Asia, Fesyun summed up.

Meanwhile, speculation emerged over the possibility of the US launching a "preventive attack" against the DPRK. Citing Bruce Klingner, former chief of the CIA Korea division, CNBC reported on January 24 that there are "very strong concerns" in Seoul over a potential American strike.

At the same time, it was also reported that the US has been steadily amassing firepower on the Korean Peninsula after Pyongyang began testing ballistic missiles in April 2017.

The views and opinions expressed by Andrei Fesyun, Dmitry Verkhoturov, and Omae Osamu are those of the speakers and do not necessarily reflect those of Sputnik.