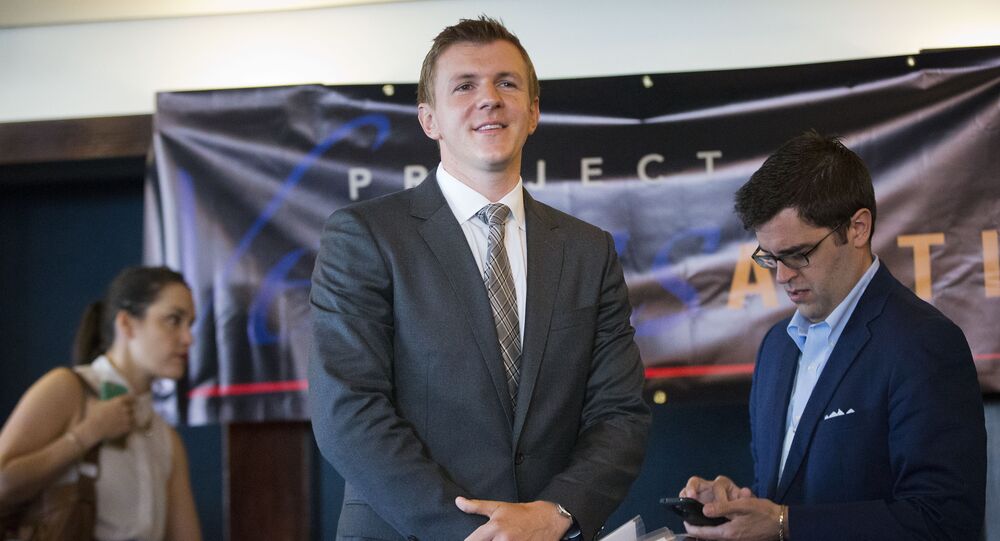 In January, iconoclastic right-wing guerrilla journalist James O’Keefe and his Project Veritas organization claimed to have uncovered video footage of current and former Twitter employees explaining on hidden camera how they censor pro-Trump and right-wing political content they personally dislike through the use of algorithms and machine learning.

O'Keefe joined Garland Nixon and Lee Stranahan on Radio Sputnik's Fault Lines to discuss his findings, as well as the charges of video manipulation and other unethical tactics levied against him.

​"He said, 'we're going to help them with a little investigation' — this is the senior security network engineer at Twitter," said O'Keefe. "Then we released videos talking about shadow banning, which everyone suspects they do. What that means is that, when you tweet to your followers, you think your tweets are getting to your followers — but they're in fact being muted or censored. We finally released a video showing hundreds of engineers looking at your private parts pictures. The engineer on tape says, 'no we have hundreds of engineers that look at your junk pics.'"

"It was very shocking, and then Twitter started getting really serious," O'Keefe continued. 'Oh, we don't do this, we don't do that.' The media, of course, just reports 'O'Keefe Claims that Twitter — ' I didn't make the claim, I'm not the one who invented the call."

Nixon said that, as a progressive with a significantly different political position than both O'Keefe and Stranahan, he respected O'Keefe's work to force institutions such as the New York Times and Twitter to be held accountable for the biases that inform their work.

O'Keefe thanked him for the compliment. "They would like to make you believe that the videos are made up, but in fact Veritas transfixes images of a power to change things. Journalists use anonymous sources and quotes — and that's fine, they're allowed to do that — but Veritas, I never even have an opinion. I just show people in their own words why we do it, because we believe that when you just pass along information from your sources, sometimes you're passing along untrue information."

"Twitter is a great example. They came out and said, 'we don't do this, we don't do that,' but all the engineers in private said they do do it and they demonstrate how their algorithms work."

Stranahan called attention to the shift in O'Keefe's style over the years. O'Keefe first gained notoriety for his expose of Association of Community Organizations for Reform Now (ACORN) in 2009. ACORN had stringently supported then-candidate Barack Obama, and O'Keefe disguised himself as a pimp and filmed ACORN personnel allegedly encouraging criminal behaviors such as tax evasion, human smuggling, and child prostitution.

Conservatives celebrated the expose of ACORN, which shuttered their operation following public outcry. However, the attorneys general of Massachusetts and California accused O'Keefe of editing the footage to negatively portray and misrepresent the ACORN members. O'Keefe also paid a $100,000 settlement to one of the ACORN employees filmed for violating California secret recording laws.

"I used to dress up like garishly and run down the street like a pimp," O'Keefe said. "This is the one thing the mainstream media throws at me is that I selectively edit. I say, 'please point out an example of this, I've done a hundred investigations, give me an example of a time.' They say, 'well you didn't wear the pimp costume when you said you were a pimp.' I said, 'protocol doesn't require wearing a pimp costume. I said I wanted to whore out underage girls, I said I want to start a brothel.' The humor, you can find it, because truth is stranger than fiction."

Stranahan compared O'Keefe's work to that of WikiLeaks founder Julian Assange. Both are controversial figures and both challenge the establishment through their releases of information that powerful groups would prefer not to see publicized.

"I quote [anti-authoritarian author George] Orwell extensively in my new book, 'American Pravda.'" said O'Keefe. The title refers to "Pravda," a Soviet newspaper whose name means "The Truth" in Russian and that served as the official media organ of the Communist Party, providing an officially approved and ideologically consistent version of all news and political events in the country. "What Orwell said is that this establishment, the power of the deep state, their final commandment is to not believe the evidence of your own eyes and ears. They do not want you to trust your own senses, you must look at their interpretation of the world."

"So cinema verité says to trust your own senses. Listen to the people in the video like you're a jury listening to testimony from these Twitter employees. They're saying what they do and how they do it, how they censor. The establishment, the media just says, 'no, no, don't trust that. Trust what the Twitter executives say on the record.'"