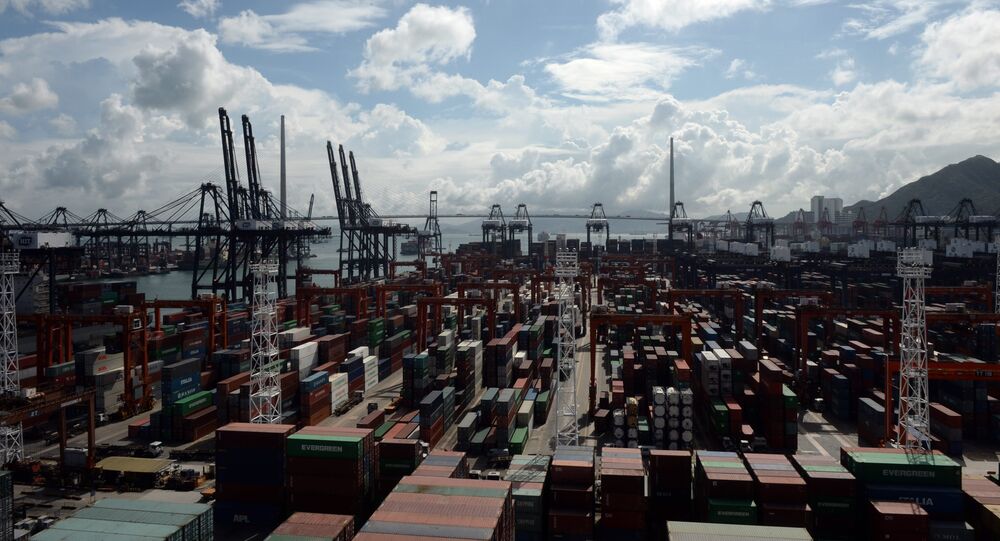 Extinguishing the Chinese Sun: Did the US Just Declare Economic War on Asia?

Amid protests from Beijing and Seoul over new US trade restrictions on washing machines and solar panels, Russian journalist and geopolitical analyst Viktor Marakhovsky explains why Washington's move is really part of a much broader, considerably more significant series of processes marking the decline of US global hegemony.

China and South Korea have voiced their dissatisfaction over President Trump's decision to impose steep tariffs against solar panels and washing machines from the two countries, with many observers now concerned that the restrictions may be just the beginning of further protectionist measures, including higher tariffs on steel, aluminum and other goods.

Speaking to reporters on Tuesday, Trump confirmed that Washington was "looking at a lot of things" to possibly raise tariffs on. South Korean trade minister Kim Hyun-chong called the washing machine restrictions "excessive," and a violation of WTO rules. China, meanwhile, called the solar panel tariffs an "overreaction," and vowed to work with other WTO members to "resolutely defend its legitimate interests."

Commenting on the story in a piece for RIA Novosti, Viktor Marakhovsky suggested that another aspect to the story was considerably more intriguing, and more important.

© AP Photo / Andrew Harnik
Trading Places: Why US’ Approval Ratings Fall, While China, Germany On the Up
Last week, the columnist recalled, the latest 'US-Global Leadership Project' polling by Gallup revealed that over the past year, the world has effectively fallen out of love with America's leadership, with an average of just 30% of the citizens of the 134 countries polled marking their support. For comparison, last year, following the Obama presidency, the indicator stood at 48%.

Most significant, according to Marakhovsky, is the fact that it was the superpower's oldest and most loyal allies which saw the biggest drops in approval, with a map of the polling showing that Canada, Mexico, Australia, Latin America and Europe were the hardest hit. In the meantime, approval remained stable across most of the USSR, with only Israel, Macedonia, Liberia, and curiously, Belarus marking a significant jump in approval of US leadership.

Even Iran, which Trump has accused of being a terror state, and Venezuela, whose leaders have accused the US of plotting a coup, have shown smaller drops in their attitude toward Washington than its Western allies.

This isn't hard to explain, Marakhovsky wrote. "Among Russia and its neighbors (as well as Venezuela and Iran), there is little room for the US rating to deteriorate any further. On the contrary, citizens of these countries have simply been convinced that the 'new US' is no more pernicious than the old, and have reacted accordingly – i.e. either not at all, or even positively."

© Sputnik
Misled?
"But those who at one time or another dutifully joined the so-called Pax Americana, and who have now been told that there won't be any more perks – i.e. that there is no single globalized world, that everyone is to fend for themselves, and will have to pay to export its washing machines, these countries have been stricken by grief," the observer added.

'Obama's America', according to the journalist, was perceived by the world's pro-American elites "as the embryonic form of a kind of global government. The ideologists of this future super-system saw the US as a platform and a power base, the 'first province of a networked superpower," controlled by corporate consensus and the free market ('free' in the understanding of this corporate consensus).

"Toward the realization of this idea were brought not just the sacrifices of 'humanitarian interventions', and the tens of thousands they left dead, but also two trans-oceanic partnerships – the Atlantic and the Pacific," Marakhovsky noted.

But with Trump's arrival, this vision was suddenly cracked, the observer wrote. "In essence, the new president voiced a simple idea: that the US does not want to be a province in a world empire, even the primary one. America finds it enough to be the strongest 'sovereign state' on the planet. America has its own citizens, its own factories, its own expenses and its own problems, and will deal with them, first and foremost." After all, "world domination is all well and good. But the kind of domination under which the US orders others to jump, and the rest of the world asks 'how high' is something America just does not have the resources for."

© REUTERS / Joshua Roberts
'Chaotic Political System': Chinese State Media Says US Government Shutdown Lays Bare 'Chronic Flaws'
In this sense, Marakhovsky stressed that "what we are witnessing is the process of painful disenchantment.  Imagine for a moment how many smart, managers at various levels around the world were preparing to take up their positions in this new world super-mega-empire…Add to this the very real material well-being, whatever its level for ordinary citizens, created in different parts of the world on the already almost complete platform of this global empire…" only for the whole project to be taken and discarded.

This, the journalist argued, was the real reason why the US's European allies have turned into the fiercest critics of US global leadership under Trump. As for Russia, it had little to divvy up with the US in the first place, hence why Russians' opinions on US leadership didn't fall, but even rose slightly. The fact that all efforts to 'isolate' Moscow, starting under Obama and continuing under Trump, have proven completely ineffective only helped to solidify this view.

"Where the US proceeds from here is its own business, strictly speaking," Marakhovsky wrote. "At the very least, America has already discovered the basic truth that being a real power is not about bending everyone to one's will, but quite the contrary –about sponsoring and accounting for the interests of others, sharing and being reckoned with. This is the prospect confronting every power making a claim to ruling the world, or a big chunk of it."

In this sense, Trump's seemingly insignificant step of moving to 'extinguish the Chinese sun' through solar panel tariffs carries a double meaning, according to the journalist. With Washington commonly referring to itself as 'a shining city upon a hill, lighting up the whole world', what Trump has effectively done is flick the switch on this light. "And now all the 'disciples' of the US, discarded, face the task of searching for their own place in the world again, and doing so in the dark," the observer concluded.