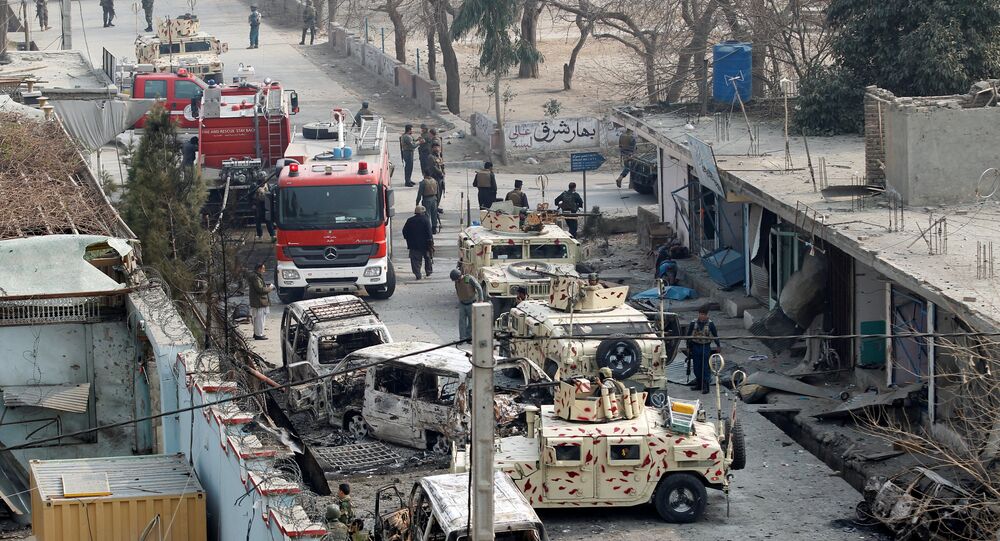 Daesh has claimed responsibility for an attack on the offices of the international non-profit organisation, Save the Children. The attack has killed at least three people, and wounded upward of twenty five others. Sputnik spoke to Ali Latifi, an Afghanistan-based journalist, to find out more about Daesh’s presence in the war-torn country.

Sputnik: So firstly, why do you think Daesh target the offices of Save the Children, rather than military or government property as many recent attacks in the country have done?

Ali Latifi: If we look at the most recent attack preceding this, it was an attack on the intercontinental hotel, which is not a military target or a government target either. Daesh is kind of hard to understand, in terms of their intention, because you don't really know what their actual aim is. At the end of the day the Taliban, although they end up killing civilians and targeting areas that are conveniently close to civilians, they usually justify it by trying to say that there is a military to political angle to it because their whole argument is that they're fighting a foreign occupation even though, again, it's often civilians that they end up killing. But with Daesh it's hard to understand what their intentions are and why they would chose Save the Children.

I think if anything it might just be to scare people in the sense that nowhere is safe, no agency is safe. Also in a city like Jalalabad, which is very crowded and cramped, and there are a lot of schools and masjids which are also very close to each other, it's a very cramped city. Any target that you choose will cause casualties and will increase the fear because of the proximity of everything to one another.

Sputnik: Are these attacks perhaps a sign that Daesh's presence in Afghanistan is growing in terms of its ability to carry out formidable attacks?

Ali Latifi: It's definitely making a concerted effort to stage more attacks in Afghanistan. Last year, some of the larger scale attacks in Kabul were claimed by groups claiming allegiance to Daesh. I was actually in Jalalabad last week and this is one of the questions that people were asking.

© REUTERS / Mohammad Ismail
Unknown Gunmen Reportedly Attack UN Staff, Kidnap Woman in Afghanistan's Kabul
There are more reports now than ever of the government saying that "this many Daesh have been killed" or "some militants from that group were killed," which gives the impression they're taking the operation very seriously and they're going much more full force — including areal operations — into these areas saying that they are targeting Daesh. But this leads to the question of, if they're being targeting heavily, how're they still continuing to stage these attacks, and more importantly, how did they go from the east all the way to the northern province bordering the Central Asian states? This is a big question for people.

Sputnik: Would you say then, that the US forces in the country and the Afghan security forces are making a concerted enough effort to defeat the budding Daesh presence before it starts to grow significantly?

Ali Latifi: They're definitely carrying out an effort; you keep seeing reports about it. Of course the issue reports like this is that it's in more remote villages at night and there is very little possibility of following up on it to see exactly who has been targeted and how. But more than anything, it shows that these groups, whether it's the Taliban or Daesh are getting support. They're getting support and they're growing, and they're changing in that sense. There are reports that Pakistan are aiding Daesh, and Hamid Karzai that the US is aiding Daesh, so there is something more to it, obviously.

The views and opinions expressed by Ali Latifi are those of the speaker and do not necessarily reflect those of Sputnik.