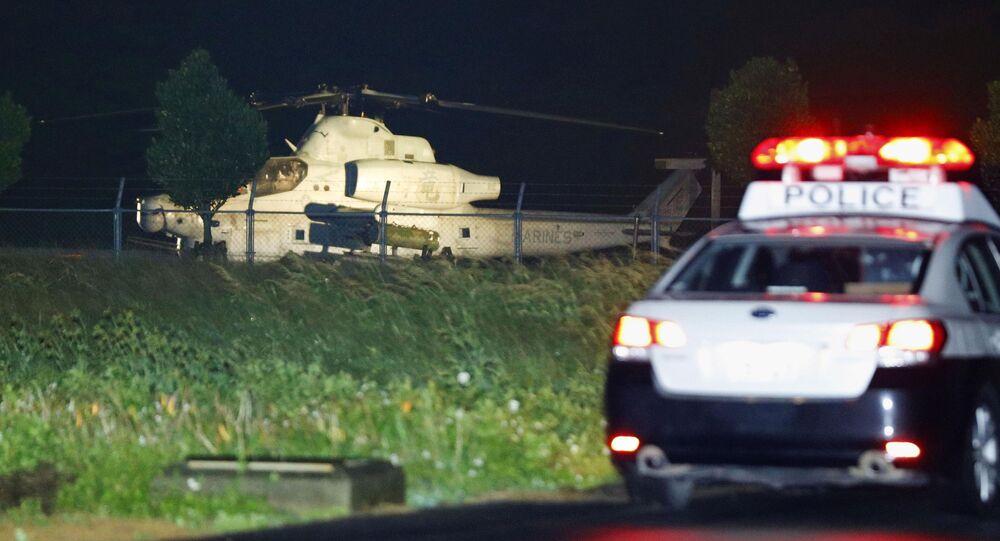 Unwelcome Guests: Why Okinawans Want to Send the US Military Packing

The recent low-level flight by US combat helicopters over a school in Okinawa despite promises not to do so has led to new protests against the American presence. Military analyst Andrei Kotz explains why the US is likely to continue to shore up its presence on the island, three-quarters of a century after the end of World War II.

The latest loud scandal involving the US military on Okinawa heated up last week. The Japanese Defense Ministry, fed up with the US Marine Corps' denials that it had flown military helicopters over a local elementary school, released security footage showing three choppers flying over the school's airspace.

The politically charged incident follows a case involving a US helicopter window falling onto a local school last month, causing minor injuries to a 10-year-old boy. That event prompted the Okinawa Prefectural Assembly to endorse a resolution calling on the US military to suspend all flights over schools and hospitals.

Last week's incident prompted a furious Okinawa Prefecture governor Takeshi Onaga to accuse the US Marine Corps of breaking their promise to stop the flights, and to say that in light of these scandals, US forces on the island could not be considered "good neighbors."

"Washington, however, continues to play mum, and to pretend as though nothing serious has happened," military observer Andrei Kotz observed in an article for RIA Novosti. Admittedly, the journalist noted, keeping silent is becoming harder and harder, since similar incidents are becoming more and more frequent.

A spate of incidents involving aircraft has rocked the island in the past two months alone. In January so far, three separate cases have been reported involving US helicopters making emergency landings, one of them on a local beach, another in a village hotel parking lot. Meanwhile, last month, a container with US military markings fell onto a daycare in Ginowan, southern Okinawa. The spate of accidents, blamed on technical errors and the human factor, have yet to lead to any public repercussions for US personnel.

The close calls follow more serious incidents which took place earlier, including an accident involving an intoxicated driver of a US military truck, which resulted in the death of a local man in November, an incident involving parts falling off an F-35 fighter during landing (also in November), and the crash of a CH-53E helicopter near a military training area in October.

In Okinawa a Japanese man in 60s driving in this car was killed in crash with drink-driving U.S. service member. But US soldiers are untouchable for Japanese police and walk free again most likely. pic.twitter.com/0cvT5CK1lh

Pondering why the US continues to risk alienating its Japanese ally through the Okinawa base, which seems to be a source of one scandal after another, Kotz explained that the reason was strategic.

"After the end of World War II, the Americans deployed a network of network of military bases, ostensibly meant to protect Japan from 'Soviet aggression', but actually aimed at creating a powerful springboard for the US military into eastern Eurasia," the observer noted.

With over 90 major military facilities spread across the country, the US military operates United States Forces Japan (USFJ) a separate command from its Tokyo headquarters. The tiny island of Okinawa, about 650 km south of the main Japanese islands, has 11 US Marine Corps basis, including training facilities, airfields, logistics center, ammunition depots, and more.

#Okinawan lives matter. From Okinawa In spite of frequent accidents US helicopters are still flying over our head around 10:40

Okinawa's Kadena airbase is home to the 18th Wing, one of the largest formations of the US Air Force abroad. The wing includes two F-15C/D fighter squadrons, search and rescue aircraft, tankers, and reconnaissance planes, for a total of about 80 aircraft. Moreover, the island hosts the 1st Battalion, 1st Air Defense Artillery Regiment, which participated in Operation Iraqi Freedom before being redeployed to the island in 2006.

© AFP 2020 / TORU YAMANAKA
US helicopters and planes parked at Futenma US Marine Base in Ginowan, Okinawa Prefecture (File)

In total, Okinawa hosts over 50,000 US military personnel and, according to Kotz, "judging by the summaries of crime-related news, these troops often confuse their service in the military with a resort. Since 1972, about six thousand crimes have been committed against the local population, including about 100 murders, over 300 rapes and over 200 vehicle accidents leading to fatalities."

© REUTERS / KYODO
Okinawa Reportedly Passes Resolution Against US Army Flights After Window Fall
Local residents have staged protests against the US presence for over two decades, their anger boiling over following a ghastly incident in September 1995, when three US Marines kidnapped, beat and raped a 12-year-old girl. The marines received seven and ten years, and given an 'other than honorable discharge' from the US military upon returning to the United States.

Unfortunately, Kotz noted, the incident has since been followed by dozens of similar crimes. In a widely publicized 2008 case, a Marine was arrested for the rape of a 14-year-old girl in the city of Tyatan, prompting local authorities to urge parents to accompany their children to school. This was followed by the brutal 2016 rape and murder of a 20-year-old woman by a Marine, also accompanied by significant media attention and protests.

Ultimately, the analyst suggested that the latest incidents involving US aircraft are an indication that disagreements between Okinawans and their US guests are likely to remain, with locals continuing to plan and stage protests against the US presence. In the meantime, "the Americans continue their construction of bases, having already fenced off a 160 hectare on the coast for a new helipad."

Another US Military Helicopter Makes Emergency Landing on Okinawa