MOSCOW (Sputnik) – Grassroots reporting, mutual accountability among journalists and promotion for quality journalism are among the methods that the media could use to improve quality of stories amid the proliferation of fake news, the panel of media professionals, a Pakistani politician and an entrepreneur behind Wikipedia suggested on Wednesday.

How Useful is ‘Fake News’ Term?

The panelists of the "Fake News versus Real Politics" session appeared to have different views on how the term, whose popularity soared in 2017, is being used.

"It is a useful term in the sense … the phenomenon of maliciously created false information for political or economic purposes is an ongoing and very serious threat when news and information is distributed so widely on technology platforms," Joseph Kahn, managing editor of the New York Times (NYT) newspaper, said.

Bilawal Bhutto Zardari, the chairman of Pakistan Peoples Party, noted that "when politicians use it as a catch-all phrase to cover political spin, stuff they don’t like, then it gets murky."

"I think there’s a debate to be had about how useful the term ‘fake news’ is," the Pakistani politician said.

Anna Belkina, the deputy editor-in-chief of the RT broadcaster, pointed out some dangerous uses of the term, such as silencing the opinions that one does not like.

"The term is absolutely toxic … We see it weaponized by public figures, but also by media organizations as a way to silence dissenting voices," Belkina said.

READ MORE: Who Pays for It and Will Trump Make It? 7 Things to Know About Davos

Belkina warned about the danger of lumping together accusations of spreading fake news and propaganda. According to Belkina, the latter is more subjective and harder to pin down, while the former actually requires proof.

"This is part of the problem, that we are conflating terms like ‘propaganda,’ misinformation,’ disinformation,’ [which] are notably much more subjective and vague than something like ‘fake news.’ And they are used to dismiss and discredit any kind of dissenting, any kind of inconvenient opinion, or even fact," the RT deputy editor-in-chief said.

Fake news gained a widespread media attention in late 2016 and throughout 2017 over the role that they may have played in the presidential campaign in the United States. Research centers and journalists have attempted to look at the impact of the spread of the false stories ahead of the November election, while US President Donald Trump, in turn, has repeatedly used the phrase to criticize media reports, mostly the negative ones about him or his policies.

© REUTERS / Ruben Sprich
Oxfam Speaks to Sputnik on Spiralling Global Inequality Ahead of Davos
According to Kahn, fake news do not push people to choose a different side of the political spectrum, but, rather, the fake news phenomenon stems from the extreme identification with a certain political movement.

"We are in an environment where people lead identity-based political lives, where they are affiliating with certain news and information based on its political value, based on the way political parties are using it. I don’t think fake news is the cause of the problem to democracy, I think that proliferation of fake news is one of the most important symptoms of a decline in sort of shared values and shared sense of truth," the NYT managing editor said.

Belkina pointed to a mitigating factor regarding the spread of the fake news and their potential damage to the democracy, the fact that they appear to have little influence on people.

"Any kind of false information has a potential to negatively influence not just political processes, but any kind of public discourse overall. However, there have already been several studies in the United States and Europe that show that even though people might be exposed to fake news, to false stories and false information, in the grand scheme of things, they still make their decisions, their political decisions, on the basis of factual information, factual reporting," the RT deputy editor-in-chief said.

It is important for "avid news consumers" to keep in mind that people who do not follow the news regularly and extensively may have trouble distinguishing between true and obviously untrue stories, Jimmy Wales, the co-founder of Wikipedia, said, regarding the proliferation of fake news on the social media.

The RT deputy editor-in-chief suggested, in turn, that it was vital to understand why people were actively reading and sharing stories on the social media.

"I think the big reason for that is that for many years, if not decades, a large part of the audience, in the United States, in Europe felt under-served by their own news media because they did not see that as reflecting their reality and so they would turn to alternative voices, some legitimate and responsible and accountable like RT, but others are not," Belkina said. 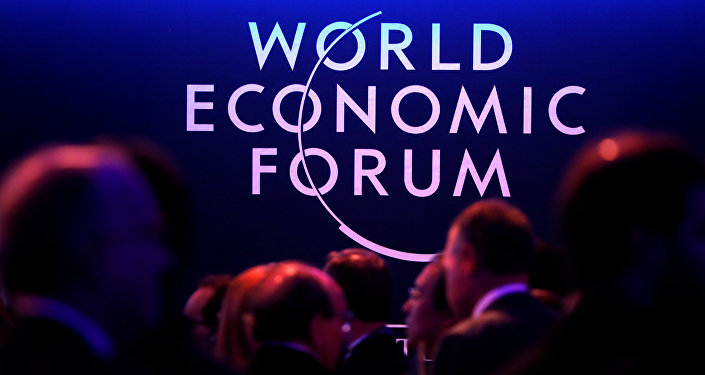 © REUTERS / Denis Balibouse
World Economic Forum Participants Discuss Resolving Middle East Crises
She added that the problem would persist until the mainstream media took a critical look at themselves.

Community-based journalism is one of the options that allows to have accountable media, according to Wales, who described his new project WikiTribune, a website combining work of professional journalists and volunteers.

"The idea I have is to say, 'Look, we know that communities can do incredible positive work' … And I want to see if we can bring in a Wiki-style community, pair them with paid professional journalists to do something new in the space of news," Wales said.

The Pakistani politician said he would prefer community-based fact-checking organizations to verify the quality of news stories rather than have government regulations. Bhutto Zardari admitted that grassroots censorship on its own might not be enough to counter the most harmful effects of the fake news.

© CC BY 2.0 / red, white, and black eyes forever / CNN Center
Man Facing Trial in US After Threats to Kill CNN Staff for 'Fake News' - Reports
His sentiment was echoed by Belkina’s suggestion to look for ways to "inoculate" the audience against the fake news. The RT editor-in-chief also pointed out the benefits of an environment where journalists could hold one another accountable and let one another know about their mistakes.

"A lot of the solution lies with the news media community and holding each other accountable … If there is a real, honest, open approach and examination, when mistakes that RT makes can be pointed out in a constructive debate by the likes of the New York Times, but RT’s in the position to point out mistakes in the New York Times reporting, that is the most constructive approach," Belkina said.

The RT deputy editor-in-chief noted that such an approach could hardly survive in the situation where some media were using US president accusations of "fake news" against them as "a badge of honor," while similar accusations made by French President Emmanuel Macron against RT were taken at face value, without further examination.

The panelists differed in their opinions on the future of the fake news as a popular phenomenon.

"Yes [fake news will be around], but not for much longer. I think that we’re all starting to see the issues with it," the RT editor-in-chief said.

The Wikipedia co-founder said blatantly obvious fake news websites were likely to be weeded out with the help of algorithms, but the deeper problems in quality media would remain.

According to the NYT managing editor, the actual fake news are on the decline, but "the fake news as a political smear" were on the rise.

"They’ve been around for ages, they’re going to be around for a lot longer," Bhutto Zardari said.

The Pakistani politician expressed hope that people would be able to educate themselves in order to be able to deal with the issue.

The views and opinions expressed are those of the author and do not necessarily reflect those of Sputnik.

Journalist: ‘No Evidence’ Russia Interfered in 2016 Election Via Social Media