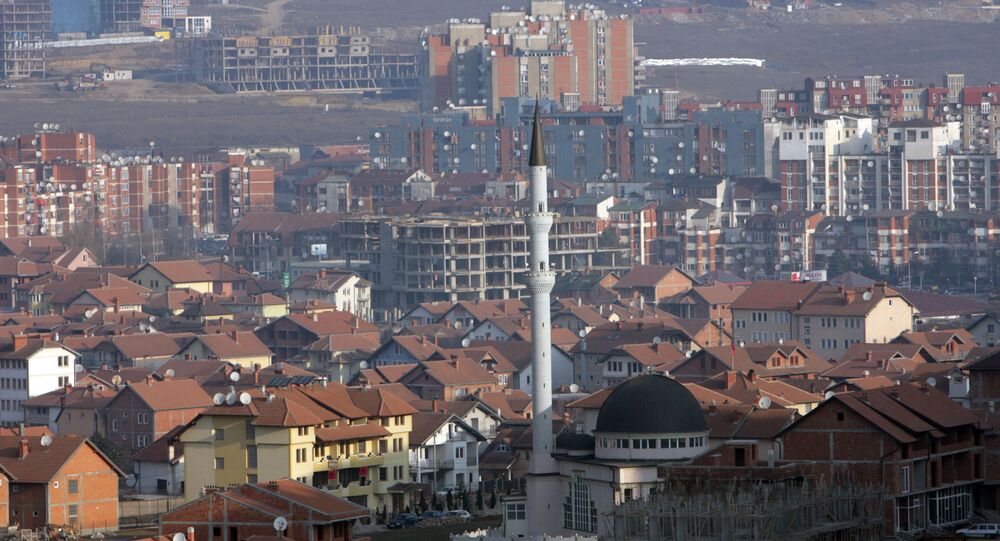 US Pulling the Strings of Power in Kosovo - Expert

The Assembly of Kosovo failed to convene for a vote on the revocation of the special court, according to local media. Speaking to President of Kosovo Hashim Thaçi, Prime Minister Ramush Haradinaj and Chairman of the Parliament Kadri Veseli, Delawie reportedly warned that the government of Kosovo may share the same fate as "the Milosevic regime."

© Sputnik / Maxim Blinov
Moscow Calls for Thorough Probe Into Murder of Kosovar Serb Politician Ivanovic
In the official statement published on the embassy's website, the ambassador toned down the rhetoric, only saying that tolerating impunity shouldn't be the norm in Kosovo as it was during the era of former President of Serbia Slobodan Milosevic. He did, however, caution Kosovar politicians about the possible consequences of attempting to thwart the actions of the court.

"This effort is a terrible example of self-interest prevailing over the common good and over Kosovo's interests as a state. And let me be clear: MPs who support this initiative — and the politicians who lead it, despite their denials — will be subject to specific and harsh consequences should the initiative succeed," the statement said.

Serbian political analyst Aleksandar Pavic described Delawie's remarks as outrageous, saying that the US ambassador is aware he is dealing with criminals, but if they do what the US wants them to do, there will be no retribution.

"Milosevic is a paradigm for them now. It sounds like ‘share the same fate as Hussein or Gaddafi.' But the truth is that the Special Court to try KLA members for war crimes will be nothing but a political tool in the hands of the American diplomats, similar to the International Criminal Tribunal for the former Yugoslavia (ICTY). It has nothing to do with justice," Pavic said.

© CC BY-SA 3.0 / Medija centar Beograd / Oliver Ivanović
Serbian President Calls Assassination of Kosovo Serb Politician Terror Act
A renowned attorney in Belgrade, Toma Fila, told Sputnik that the US is threatening Kosovo with what they earlier did in Serbia without acknowledging it: "The Slobodan Milosevic regime was toppled with major financial support from abroad. Everyone from the Democratic Opposition of Serbia (DOS) was funded from abroad and everything was done to push people to take to the streets. They now threaten Kosovar Albanians that they will fund alternative parties and ignite unrest, if necessary," he said.

"Or, for that matter, they'll support Moscow's idea to have this court function under the authority of the UN, which would automatically deprive Pristina of any control of it," Fila said, implying the January meeting of US diplomat Stephen Banks with Haradinaj, during which Banks said that Washington would not block a Russian initiative to create a similar court in the UN Security Council if the KLA court is abolished, as reported by Kosovo newspaper Koha Ditore.

Americans are the true owners of Kosovo, Fila said.

"Haradinaj told us… that the then US ambassador literally pulled out from nowhere the name of Atifete Jahjaga [former President of Kosovo] and told us to go to the parliament and appoint her as president. And the lawmakers elected Jahjaga although they virtually never heard of her," the attorney said.

The expert pointed out that Thaçi and Haradinaj are pushing for the abolition of the special court because of pressure from members of their inner circle who fear they may end up on the wrong side of the witness stand. If that happens, they will not keep silent — they will say who was giving orders.

"Take the Hague Tribunal for example: not a single politician was sentenced for ordering the killing of someone. They were sentenced for being part of the government when the crimes were committed. We are talking about collective responsibility — because Haradinaj may eventually have to answer for all troops he was a commander of, for everything those soldiers have done," Fila concluded.

The views and opinions expressed by Toma Fila are those of the author and do not necessarily reflect those of Sputnik.