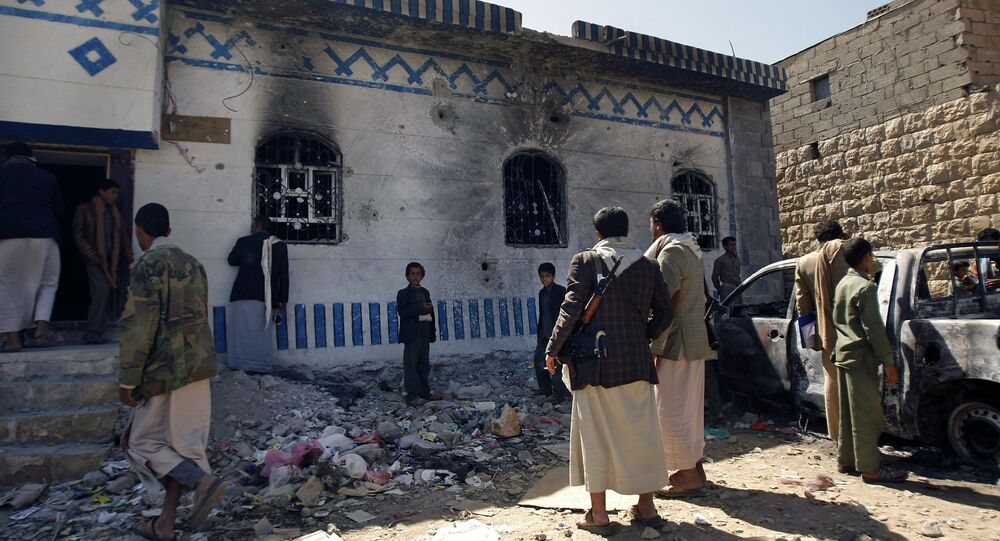 Yemen: 'There is a Deep Need for Diplomatic Solution'

Yemen's President Abd Rabbu Mansour Hadi is under pressure from South Yemen to replace both the prime minister and parliamentary cabinet. Sputnik spoke with Mahjoob Zweiri, Associate Professor in Contemporary History and Politics of the Middle East at Qatar University, and political commentator Rula Jebreal, to get their views on the war in Yemen.

Sputnik: How do you believe the conflict in Yemen could be resolved?

Rula Jebreal: This is the most delicate moment in the middle east and what we are watching is the disintegration of the GCC, Gulf Coast Countries. The attitude of Saudi Arabia and the Emiratis in Yemen is that only a war could settle and solve the problems with the Houthis.

This is not reaching anything except for creating human catastrophe, radicalizing an entire generation of young people, who are so poor and so desperate at this point.

There is no military solution to the military issue, but the attitude of Mohammed Bin Zayed, the ruler of the Emirates, and Mohammed Bin Salman has been a very aggressive, belligerent one.

I think so far they've spent 50 billion dollars on that war and the results are horrifying. It's the biggest human catastrophe and crisis as we speak. There's cholera, there's radicalization, people are dying, one million children have already died, so in terms of public opinion, it's backlashing on them and in terms of humanitarian crisis, everybody will pay the price. Even European countries because of refugees and radicalization.

There is a deep need for a diplomatic solution, for some kind of reconciliation. We cannot afford another war; we already have Yemen which is a disaster, Iraq fifteen years on and still in deep crisis. Syria is another war, in Lebanon there is an unstable situation, and also in the occupied territories.

The region needs a vision, and the vision cannot be war or a belligerent vision it needs firm leadership and that's why I think, who can play that role of reconciliation at this point with an American absence? It could be Russia at this point, and president Putin. They could push the parties to reach some kind of agreement and have some kind of national reconciliation between Iran on one hand and Saudi Arabia on the other.

Mahjoob Zweiri: I think there are two main requirements. The United Nations should be on board fully and change its approach on its involvement. So far the United Nations seems to be more towards what Saudi Arabia is doing and I think this should be changed. They have to push all parties towards a political solution.

The second issue; I think is the issue of the Houthis. Houthis are illegitimate entities in Yemen in terms of politics. If they want to be part of politics, they should leave their power and be engaged politically like other parties and if they win the elections, they can run the country.
For the time being, because they have the military and they have the weapons, they are controlling the political scene. This should not be accepted by the international community. I think Houthis are part of the problem and if things remain like they are now; I'm not sure Yemen will be in a good position.

Sputnik: What has caused the clashes between Saudi Arabia and the United Arab Emirates in Yemen?

Mahjoob Zweiri: The Emiratis basically tried to have military bases in the south of Yemen, promoting the separation of Yemen into two Yemens, working with those who are against the legitimate government and tried to support them financially and politically. That is basically what we see now.
The situation now has also deteriorated simply because of the economic situation of Yemen as a whole.

Sputnik: Why has the US not intervened?

Rula Jebreal: The US has no interest in anything except Donald J Trump. Nothing else. The focus of the United States, the media and even the political establishment is on him. They are worried about what Trump is tweeting, what Trump is saying, American leadership has been relinquished in the middle east, there's no leadership, there's no vision and with President Obama they used to say they are leading from behind. Now they are not leading at all. There is a vacuum.

The views and opinions expressed by Rula Jebreal and Mahjoob Zweiri are those of the speakers and do not necessarily reflect those of Sputnik.