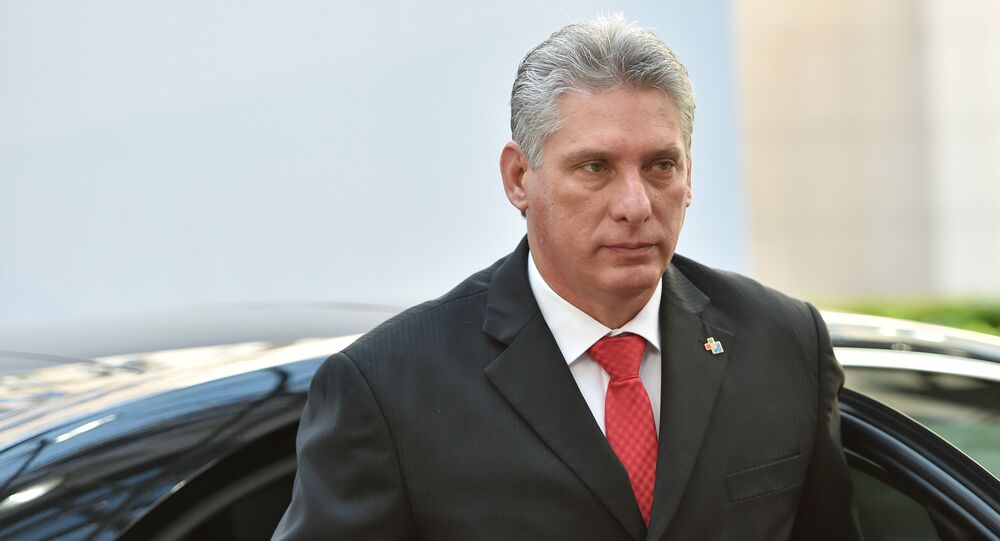 Cuban President Raul Castro is due to hand over the reins to his successor this year. All the indications are that First Vice-President Miguel Diaz-Canel Bermudez will assume the presidency after the Castro brothers, becoming the first leader of the country who was born after the legendary Cuban Revolution.

Miguel Diaz-Canel Bermudez, first vice-president of Cuba and former university professor, may become the new president of the country in the coming months. On April 19, Raul Castro will finish his second tenure and pass a law that will limit the maximum period of president's being at the helm by two five-year terms.

In February 2013 Diaz-Canel became the first leader born after the Cuban Revolution (1953-1959) to assume the position of first vice president, while being a member of the Politburo of the Communist Party of Cuba, the top governing body of the country.

In recent public appearances, he has advocated the idea of the continuity of socialism and revolution, although there are no political campaigns in Cuba.

© REUTERS / Jonathan Ernst
'Hatred and Derision': Cuba Slams Trump's Reported 'Sh*thole Countries' Slur
The politician has been a member of the Politburo [the party's highest decision-making body] since 2003. He has also been the first secretary of the party in the provinces of Villa Clara and Holguin and was the minister of higher education until 2012. In the same year he became a vice-president of the Council of Ministers, and maintained this position till 2013.

Speaking at a press conference in November 2017, the politician pointed out that "there will always be presidents in Cuba protecting the revolution they will be common people, whom the people themselves will choose."

Diaz-Canel was born into the family of a teacher and a factory worker who were living in the central part of the island. After training as an electronics engineer, he was drafted into the Cuban Revolutionary Armed Forces (FAR).

He then turned to teaching, joining the Central University of Martha Abreu (Universidad Central Marta Abreu). There he became the leader of the Union of Young Communists (UJC) and in 1994 Diaz-Canel was appointed as the first secretary of the Central Committee in this province.

Under his mandate, the Villa Clara province, which is located in the central part of the island, has undergone a number of positive cultural transformations. For instance, the El Mejunje Center was founded, which became one of the first places to host a transgender show. The city has also become the epicenter of the Cuban rock movement.

© REUTERS / Alexandre Meneghini
Mogherini Says US Economic Blockade of Cuba 'Obsolete, Illegal'
In 2009, Diaz-Canel moved to Havana having been appointed as minister of higher education and in 2012 took up his duty as a vice-president of the Council of Ministers. In both positions he earned the reputation of an enthusiastic reformer.

It was Raul Castro who appointed Diaz-Canel as the first vice-president of the State Council. The politician replaced his predecessor, the legendary Jose Ramon Machado Ventura, one of the partisans of the Sierra Maestra, who were led by Fidel Castro, Cuba's former president and one of the world's longest-serving and most iconic leaders.

Raul Castro has been ruling Cuba since 2008, succeeding his brother Fidel. In 2013, he began his second tenure and promised that at the end of this period — in 2018 — a new president will take office.

The EU 'Going at Loggerheads' With US Over Cuba – Analyst