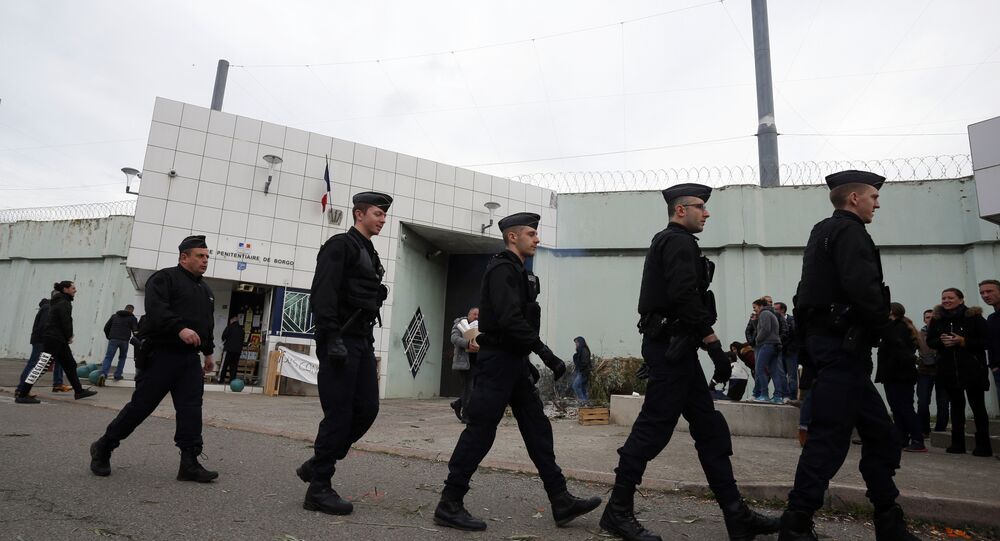 MOSCOW (Sputnik) - the secretary general of the French UFAP-UNSA prison union Jean-Francois Forget spoke to Sputnik amid a nationwide wave of clashes and attacks on guards in detention centers.

French prison guards will continue their strikes unless the government offers acceptable proposals regarding better pay and measures for protection of staff members from radicalized inmates, Jean-Francois Forget told Sputnik on Monday.

"The prison staff and the prison syndicates will not put an end to this movement until our demands are heard, unless the government comes up with acceptable proposals, for now they are not… We are asking for specialized facilities of a very high security level to guard the Islamist terrorists, for now there was no offers regarding this matter," Forget said.

The secretary general of the UFAP-UNSA prison union added that among the demands of the organization were also higher salaries.

"We are asking for decisions in terms of the security, additional means, notably in terms of recruiting and better remuneration, because we are being very poorly paid," Forget said.

© AP Photo / Christophe Ena
France's Constitutional Council Rules Surfing Terrorist Websites Not a Crime
French prison guards are currently on strike in more than 100 French prisons. There are only some 27,800 prison workers, which is insufficient to manage 70,000 detainees. The guards are complaining about the regular clashes in prisons, mainly initiated by "radicalized" Islamists, the latest of which happened on Sunday, when two guards were attacked by an inmate in a prison in Pas-de-Calais. The prison workers received injuries and were hospitalized.

READ MORE: Terror Attacks Considered Most Notable 2017 Events by Over 50% in France — Poll

In order to settle the issue, French President Emmanuel Macron promised on Monday to renovate facilities and expand them to house an additional 15,000 inmates. French prison unions have rejected the proposals as insufficient, calling for such measures as specialized facilities for Islamist terrorists.

France's new anti-terror legislation will only worsen the situation in the nation's prisons, as it will bring in more radicalized inmates, the current number of which prison guards already have difficulties managing, the secretary general of the French UFAP-UNSA prison union told Sputnik.

© REUTERS / Yves Herman
The Sins of the Father: France Decides the Fate of Terrorists' Families Abroad
"Absolutely. And moreover, there is no anticipation for that, there is no management of this current situation, no anticipation to deal with the reality of people returning from Syria etс, which leaves us totally disappointed. Today we don’t have the means to deal with it and it risks the deterioration of the situation in upcoming weeks and months," Forget said in response to a question on whether the law would lead to more radicalized inmates in French prisons.

In October, the French parliament approved a new anti-terror law in the wake of repeated terror attacks in the country, creating a permanent emergency state and granting the police extra powers to raid houses without warrants.