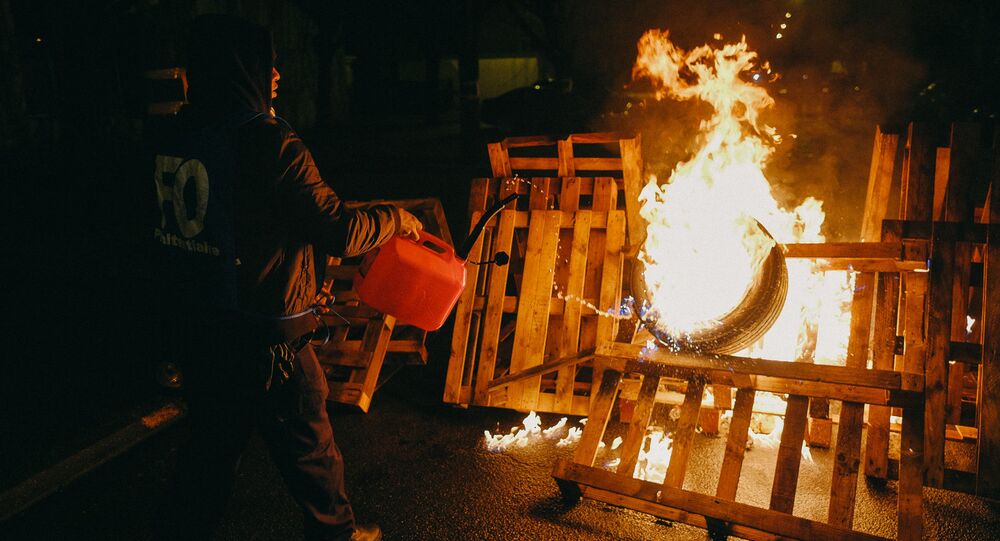 BRUSSELS (Sputnik), Luc Rivet – Over the past several days, guards of over 100 prisons across France have been protesting against overpopulation in jails and aggression by the inmates, mainly by radicalized Islamists.

French prison warders are again on strike in more than 100 French prisons. There are some 27,800 French warders for 70,000 detainees. They protest the regular aggression in the prison buildings, mainly by "radicalized" Islamists, the last ones took place on January 11th in the High security quarters of Vendin-le-Vieil in northern France, where Christian Ganczarski, a German Islamist who mounted a terrorist attack on tourists in Djerba in 2002, wounded three warders with a knife.

On Tuesday, six warders were injured by an Islamist detainee at the prison of Mont-de-Marsan in the south of the country. The director of the Vendin prison has resigned but the unions are furious and clashed with the police at several prisons, notably at Fresnes and Fleury-Merogis, the largest prison in Europe.

To tackle the situation, French President Emmanuel Macron proposed a plan, including creation of more prisons as well as employment of more warders under better working conditions. While Macron cited an occupancy rate of 139 percent in the French prisons, he did not mention the fear of detained Islamists among prison officers. According to the warders, around 15 percent of detainees are radicalized in prisons where half of the inmates are Muslim.

The French prison system faces the problem of overpopulation. However, the real problem lies with the justice system as a whole, which means that judges send too many people to prisons for short terms under 12 months, making prisons overcrowded, Philippe Pressecq, a French barrister, who has been writing about the state of prisons in France in his blog, told Sputnik.

"Real criminals must of course be incarcerated, but I am of the opinion that under a year in prison, other types of penal constraints must be found, including work, and re-insertion efforts. Overpopulation is not the problem for the hard criminals, but for short prison sentences. Judges have a culture of the prison. That should change. The alternative should be that petty criminals should be left free but under very strict conditions and with things to do for society," Pressecq pointed out.

"We have been for five days here. We have an impression that the government is non listening and does not want to listen to us. We continue to work in very difficult conditions. Inmates are left unattended. One warder has to monitor 130 detainees. There are two warders on several floors, but this is not enough, because there are a lot of other tasks – surveillance, documents. We have no time to work properly," Cedric Boualier, secretary of the Force Ouvriere trade union and its representative in the Fresnes prison, told Sputnik.

Boualier noted that up to 5,000 prison officers are attacked in the prison annually. The trade union representative added that the prison staff works in poor sanitary conditions in the jail, which has been operating since the 1800s.

Boualier condemned the clashes between prison workers and police in the Fleury-Merogis prison.

The trade union secretary called on the government to provide prison officers with batons, electric shockers, as well as other equipment and dogs that police officers use. Such measures would allow warders working properly and ensuring their own security, Boualier pointed out.

This overpopulation in prisons is also to be found in Belgium, where the occupancy rate is even higher due to lack of prison cells, increasing number of foreign prisoners and too few warders.

© AFP 2021 / Philippe LOPEZ
Over 120 French Prison Inmates Stage Riot, Special Op Underway - Reports
The situation has become one of the reasons for the Belgian government to force foreign countries to take back their criminals, if they have a foreign passport and do not have dual citizenship. The authorities have concluded agreements with foreign governments to return Albanian, Moroccan, and Turkish criminals to their home countries. Moreover, Belgian Secretary of State for Asylum and Migration Theo Francken seeks to conclude more agreements of this kind to reduce the number of detainees in Belgian prisons.

In May 2017, Belgium faced a major strike of prison officers, calling for doubling of doubled guards for safety reasons.

The situation has been further exacerbated by the government’s refusal to build new prisons to accommodate detainees. Moreover, in the past few years, Belgium had to rent prison space in the Netherlands with 300 Belgian detainees sent to the Tilburg jailed in the south of the country until 2017.

"Political correctness makes it difficult to tackle the issue of growing Islamism and radicalization in European jails. Statistics are hidden. And by the way, the French prison in the North Pas-de-Calais, Vendin-le-Vieil, where the warders’ strike started, after an Islamist injured three warders, is the prison where Salah Abdeslam, the sole survivor of the Paris Bataclan attack will be imprisoned during his trial in Belgium," Nicola Tournay, the communication director of the Belgian center-right People's Party, told Sputnik.

Example of the Netherlands, Spain

In the Netherlands, the situation is opposite to the one in France and Belgium, as there is a lot of available prison space there due to the lack of criminals to fill them. According to the Dutch Justice Ministry data, the overall crime level has been slowly falling in the country. Moreover, this level is predicted by the authorities to further decline by 0.9 percent year-on-year during the coming four months.

In the country, only a third of 13,500 prison cells is filled and five prisons are being closed. To alleviate the loss of jobs among prison workers, the country has "leased" jails to Belgium and Norway, so 300 Belgian criminals and 240 Norwegian criminals were or still are in Dutch jails, respectively in Tilburg and Veenhuizen.

Spain is also much more successful with its prison system, than France and Belgium, since a major reform in the 1990s, when the special penitentiary centers have been introduced with improved detention conditions for the prisoners.

The Spanish government also aims to ensure reintegration of detainees in the society after they are released from prison.

Additionally, Spanish prisons have been organized in the way to imitate urban environment, with social interactions between inmates being encouraged.

As for the problems in prisons in Spain, and other Western European countries, prison staff point to drug trafficking in jails by Islamic detainees with the price of drugs being much higher in prisons than outside. Often, Islamic detainees offer drugs to weaker inmates, making them dependent on drugs and prone to radicalization.

The views and opinions expressed by Philippe Pressecq, Cedric Boualier and Nicola Tournay are those of the speakers and do not necessarily reflect those of Sputnik.