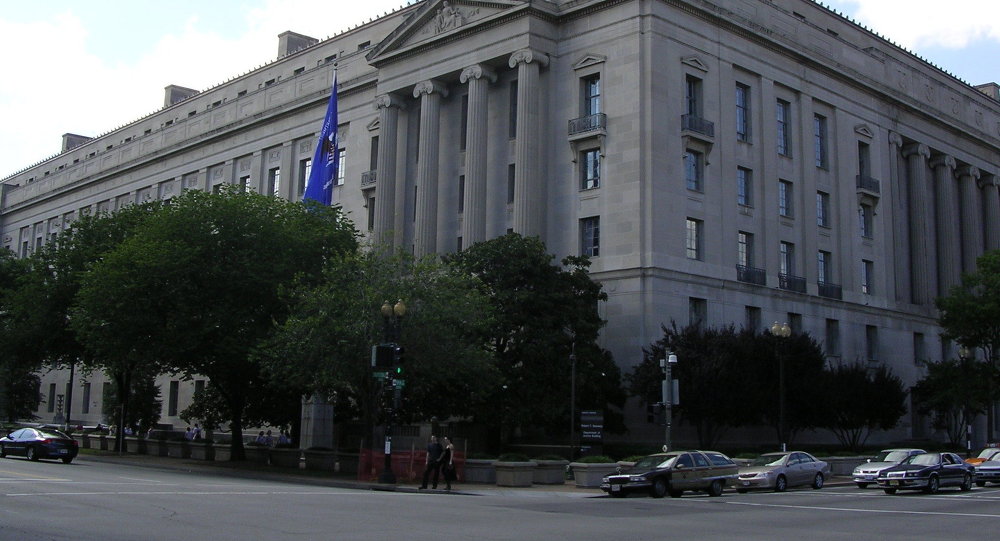 A group of American senators asked the US Department of Justice to clarify whether Chinese state media will indeed be made to register as foreign agents, as Russian media organizations have. The letter points out that the Chinese government controls a number of media that "spread news and propaganda both inside the country and on international level," and refers to the Xinhua news agency, the China Daily newspaper and CCTV TV network.

In an interview with Sputnik, the chief editor of the Chinese newspaper The Global Times, Hu Xijin, said the US fear of allowing alternative points of view on global affairs into its media space stems primarily from Washington's uncertainty about its own power.

"I think that this proposition by the American senators is reckless. It is just as absurd as assigning a foreign agent status to Russian media. The worsening of bilateral relations between Russia and the US, political tensions between them should not spread to state media of both countries. The US let out its irritation towards Russia [in the political sphere] on the RT Channel, which sustained damage without any basis. Russian media's rights to conduct normal journalistic activity in the US have been violated. These US actions are, in fact, devoid of logic; they are based on hastily fabricated reasons," Hu said.

Hu explained that by hurting RT, the US was able to put more pressure on Russia, causing the Russians to respond. "Now American senators are asking the Justice Department why similar measures haven't been taken toward Chinese media. It might appear like there is some logic here. But in reality it is an absolutely distorted logic, because the issue set up is erroneous to start with. If such measures are taken toward Chinese media, that would mean that new tensions would rise between the US and [China] — a new frontline would appear. There is no common sense [in US actions], let alone principles of diplomacy and media functioning."

© AP Photo / Andrew Harnik
US Senators Ask Gov't to Explain Lack of Foreign Agent Status for Chinese Media
Replying to the American senators' accusations, Lu Kang, spokesman for China's Foreign Ministry, underscored that China is ready to cooperate with all sides and follow principles of tolerance, equality, openness and respect for media and to create better conditions for them, not worse.

The US Foreign Agents Registration Act, or FARA, was introduced before World War II in order to determine and neutralize sources of Nazi propaganda. Recently, however, the law has been used by the US state as a tool to curb the activity of media outlets that provide an alternative point of view on world affairs and political processes. The US Justice Department obliged the RT America Channel to register as a foreign agent in late 2017.

A US intelligence report pointed out that RT and Sputnik are believed to have been a part of a multifaceted Russian intelligence operation bent on discrediting Western democracy and securing the victory of Donald Trump in the 2016 presidential election.

The American authorities insist that foreign agent status only obliges the media to display a ticker saying that this media is a foreign agent and represents the interests of foreign countries. But in reality, such a mark limits the organizations' legitimate media activity: for example, because of its new status, RT has lost its accreditation in the US Congress.

In the meantime, CASS Institute of Information Studies Director Zhang Shuhua told Sputnik that the US media do not enjoy flawless reputations themselves and often disseminate the fake news that US President Donald Trump so often speaks about.

"The US president himself keeps saying how American media create ‘fake news.' Right now this practice is only about provoking controversies. The US have already ceased being a normal state, considering the vast number of internal controversies and loss of a steady course, let alone any sense of responsibility. The US keeps looking for weak spots and flaws in other countries, especially in China; more and more often they spark discord in international problems, distort the reality. The US have already become a sort of destroyer of world order. American politicians decided to cover the internal political break this way and point their gun toward… external enemies."

Zhang pointed out that by pursuing their private interests in an attempt to get closer to Western partners, these politicians have made Russia and China their enemies. "In reality, such behavior won't benefit global cooperation and the development of human civilization; they not only lie to their citizens, they make try to make fools of the world community. If they go on like this, the US risks [turning countries away from them.] Besides, the US fans the flames of discord in public opinion and goes against common sense in the trade sphere. By causing damage to the others, they may turn into a ‘source of all discord,' resulting in the country becoming an ‘old ox harnessed to a broken carriage' and pulling the whole world into conflicts and standoffs. I would advise American politicians to be more judicious."

Hu adds that US fears stem from the country's fear of losing power.

"I think that the reason for this all lies in US' lack of confidence in its own power. Before, the US were very open, they welcomed media from various countries. They thought that they had a large reserve of ‘soft power' and could translate their position beyond their borders via media. However, now the US are anxious, not as cocky as before. That's why Russia and China worry them. In reality, though, the American media far surpass both Russian and Chinese media in terms of power. This is the reality. The influence of American media in the world is very strong now. Both Russian and Chinese media combined can't compare to American ones in terms of information power. But even in this kind of situation the US expresses their concern and believe that Russia and China pose a sort of a threat to them."

"Besides," Hu said, "the US keeps talking about Russian meddling in presidential elections and even these absurd statements are regarded in the US as real. How could Russia ever meddle in American elections? In disarray and panic, the US take random and illogical actions. They worry that activity of foreign media may pose a threat to their state security, that during the process of informational exchange with the outer world the US will sustain damage. The actions of some Americans cannot be explained with common sense and logic."

US media reports that the senators' recent statement followed a December article in Foreign Policy questioning why China's CCTV America channel is not included on the foreign agents list along with RT, even though it is also financed by a foreign government.