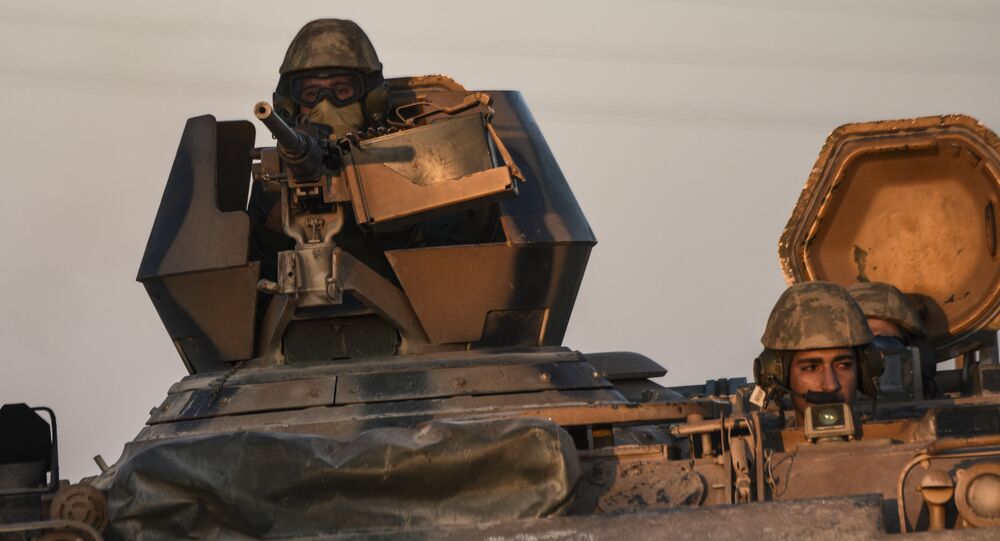 Academic: Moscow Not Interested in US-Turkish Conflict Over the Syrian Kurds

Russia could become an influential broker in the potential conflict between Washington and Ankara over the US-backed plan to form Border Security Force in the Kurdish-held territories, RIA Novosti contributor Gevorg Mirzayan notes, adding that it would be only if Turkish and US leadership lent a sympathetic ear to Moscow.

The US and Turkey are heading to a deeper crisis: Washington has not only failed to deliver on its promise not to arm Kurdish militias regarded by Ankara as "terrorists" but announced its plan to support a 30,000-strong military contingent in Kurdish-held territories in Syria.

"Currently, the Americans are training about 200 fighters, but in the future they intend to increase the formation to 30,000 people, which will be located on the territories controlled by the Kurds (along the borders with Turkey and Iraq) and protect them. At the same time they [will] protect the interests of the United States and not only on the Syrian territory," Gevorg Mirzayan, an associate professor at the Department of Political Science at the Finance University of the Russian Government, writes for RIA Novosti.

© Sputnik / Hikmet Durgun
SDF Spokesman: 'US Is Positive About the Idea of a Federal Syria'
Given the fact that the Turkish leadership views the Kurdish Democratic Union Party (PYD) and its paramilitary wing the People's Protection Units (YPG) as affiliates of the Kurdistan Workers' Party (PKK), outlawed in Turkey, Ankara's reaction to Washington's maneuver was quite predictable.

"The coalition did not hold consultations with Turkey about the creation of [these] forces, and it is unknown what coalition members made this decision. Unilateral steps, which are presented as actions of the coalition, is a seriously wrong action that will be detrimental to the fight against IS [Daesh]," the Turkish Foreign Ministry said Monday in a statement obtained by Sputnik.

Mirzayan noted that Ankara has already signaled that it will nip the project in the bud. On January 15 Turkish President Recep Tayyip Erdogan announced that the Turkish Armed Forces had completed preparations for an operation against the YPG in Afrin and Manbij, in northern Syria.

For its part, Washington is attempting to obstruct the operation, the academic noted, referring to reports of man-portable air defense systems (MANPADS) supplies to the YPG by the US.

However, according to Mirzayan, the Turkish operation has already begun and Ankara has every chance to win over the Kurds in Afrin, which remains virtually isolated from other Kurdish-held territories in Syria.

© Sputnik / Hikmet Durgun
Russia, Partners May 'Undertake Certain Measures' After US Decision on Border Force in Syria
While the Russian Foreign Ministry condemned the US decision to form the 30,000-strong military force in Syria, stressing that it could pose a threat to the territorial integrity of the country, Moscow still wants the parties involved to solve the issue through diplomatic means, the academic opined. He added that some Kurds are currently seeking Russia's protection and support.

"Given Erdogan's determination [to attack the Kurds] the Russian government has several ways to solve this dilemma," Mirzayan suggested. "The Kremlin can veto the Turkish operation, but this is fraught with another crisis in [Russia's] tactical partnership with Ankara… There is yet another way — to give the green light for the operation in exchange for Ankara's concessions on the Idlib issue, on the future of [Bashar al] Assad, and on a number of other matters."

However, according to the academic, the second scenario is still far from ideal: Russia could undermine its relations with the Kurds and lose the Kurdish card which could be played by both Moscow (and Washington) to limit Ankara's ambitions in Syria.

Therefore, the best option for the Russian leadership would be to resolve the issue diplomatically and prevent the Turks from launching the military operation, the academic believes. He added that simultaneously Moscow could negotiate the Kurdish question with Washington in order to stop the formation of an independent entity in Syria and thus help Ankara get rid of what Turkey sees as the Kurdish threat. On the other hand, the Kurds would be rescued from the Turkish attack.

"However, unfortunately, this scenario is possible only if there are forces willing to negotiate the matter not only in Ankara, but also in Washington," Mirzayan noted, throwing the possibility to find the right balance into doubt.