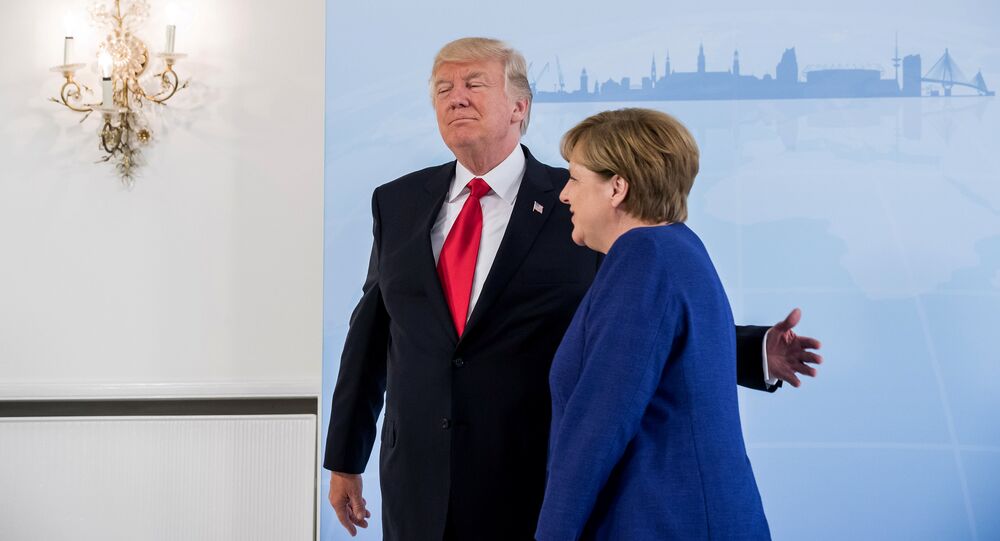 Journalist and financial observer Ivan Danilov outlines why Berlin's recent decision on the currency front has to be viewed in the broader context of a slowly but steady reformatting of the global financial system.

On Monday, Bloomberg confirmed that the Bundesbank plans to add the Chinese yuan to its currency reserves.

Commenting on the decision in a piece for RIA Novosti, Danilov noted that Berlin's move, set against the background of a Yuan riding high against the dollar in currency markets, is obviously politically charged, "especially when one considers that the entire Western world is now waiting with a sinking feeling for a diplomatic showdown between Donald Trump and Angela Merkel during the World Economic Forum" in Switzerland later this month.

In fact, the observer suggested, the actions of the Bundesbank, which follow up on the repatriation of at least part of Germany's gold reserves from the US, "indicate that Europe is ready to show in practice its ability to do without Washington's  'valuable guidance' and 'patronage'."

© AP Photo / Virginia Mayo
EU Trade Chief Laments the Decline of US Trade Leadership
While the German Central Bank is formally independent, its political ties with the Merkel government aren't really a secret to anyone, according to Danilov. The yuan decision is particularly intriguing given the fact that the Bundesbank usually refrains from announcing its intention to make currency purchases ahead of time.

What's more, the journalist wrote, recent developments on the other side of the world indicate that "Berlin's actions on the currency front need to be analyzed in the context of the broader trend of a slow reformatting of the global monetary system."

"Two weeks ago," he recalled, "US and Japanese media carried out an informational attack against the yuan, releasing a series of analytical materials claiming that all attempts by China to internationalize its currency had failed, even after the IMF had added the yuan to its basket of currencies." On January 7, for example, Bloomberg reported that "Beijing's Yuan Ambitions Look Dashed," following up an earlier Nikkei article headlined "Internationalization of Yuan Loses Momentum."

The goal of this campaign was obvious, Danilov stressed, with the basic message by US and Japanese financial pundits being that the yuan had failed, both at the IMF and in its petro-yuan efforts, and that essentially, 'the petrodollar is here to stay forever.'

© Sputnik / Mihail Kutusov
Chinese Media Explain How Russia & China Can Escape 'Dollar Domination'
But with its Monday decision, "the German Central Bank quite unceremoniously spoiled the party," the journalist added. While the bank initially did not specify the amounts or timeframes for its yuan purchases, Bundesbank board member Joachim Wuermeling soon offered more details about the move, telling Reuters that "the decision to accept the yuan is part of a long-term strategy of diversification and reflects the increased role of the Chinese currency in the global financial system."

Washington cannot but be upset with this line of reasoning, according to Danilov, since 'long-term diversification' inevitably means a weakening role of the dollar and the subsequent decline in demand, particularly if other countries follow Germany's lead.

"This is especially important in light of America's huge budget deficits, which will grow by at least another trillion dollars due to Donald Trump's recent tax reform. After all, the convenient printing press used to plug gaps in the US budget is possible only thanks to the enormous demand for dollars outside the US. If such demand ceases to exist, or is greatly reduced, the country will either have to learn to live within its means (something they have long-since forgotten how to do), or take Zimbabwe's hyperinflationary route."

In my free time I like to stare at the us debt clock & wonder how we could ever pay that off 🙃 pic.twitter.com/GpGW0UROk5

In that sense, policymakers in Washington can view the Bundesbank's decision in one of only two ways, according to Danilov: as a threat to the US's financial stability, or an unfriendly gesture on Berlin's part.

"It's absolutely obvious that no actions by the Bundesbank, or the European Central Bank, which also recently reported the purchase of yuan, will on their own lead to serious problems for the dollar system," the expert stressed. "But neither is this necessary. No one is eager to repeat the experiment of Muamar Gaddafi, who tried in one stroke to pull the whole of Africa out of the dollar system and create a Pan African currency based on gold and oil."

"Moreover, the dollar system cannot be destroyed in one blow without catastrophic consequences for the global financial mechanism. Therefore, those seeking to liquidate it have obviously switched over to the tactics of what can conditionally be called 'death by a thousand cuts' – i.e., dismantling the system with the help of hundreds of small steps, each time slightly reducing demand for and area of use for the US currency."

© Sputnik / Michael Klimentyev
Russian President Vladimir Putin and Foreign Minister Sergei Larvov during a visit with Libyan leader Muammar Gaddafi in 2008
© AFP 2021 / FRED DUFOUR
Will China Wreck the US Treasuries Market and the US Dollar?
And until that happens, countries will continue to use the dollar system, and even try to take advantage of it. For example, the Asian Infrastructure Investment Bank, the recently created China-led development bank expected to be a future competitor to the World Bank, recently announced plans to release dollar bonds to finance projects in Asia and the BRICS countries.

According to Danilov, this step and others like it serve to indicate "that China considers it important to use the existing world financial system until the point where the alternative structure becomes fully operational."

As for Russia, it too benefits from Berlin's 'yuan demarche,' the observer argued, since it weakens the 'collective West's' hostile political campaign against Moscow, while facilitating Russian economic interests.

Specifically, Wuermeling's statement that the Bundesbank is also "looking to invest in other currencies as well" is significant, Danilov stressed. "It would be worthwhile for Moscow to set for itself the task of making sure that in 10-15 years' time, the Bundesbank will want to replenish its coffers with a Russian petro-ruble, as well," the journalist concluded.

Yuan's Growing International Status 'Not Under Threat' From Dip in Transactions