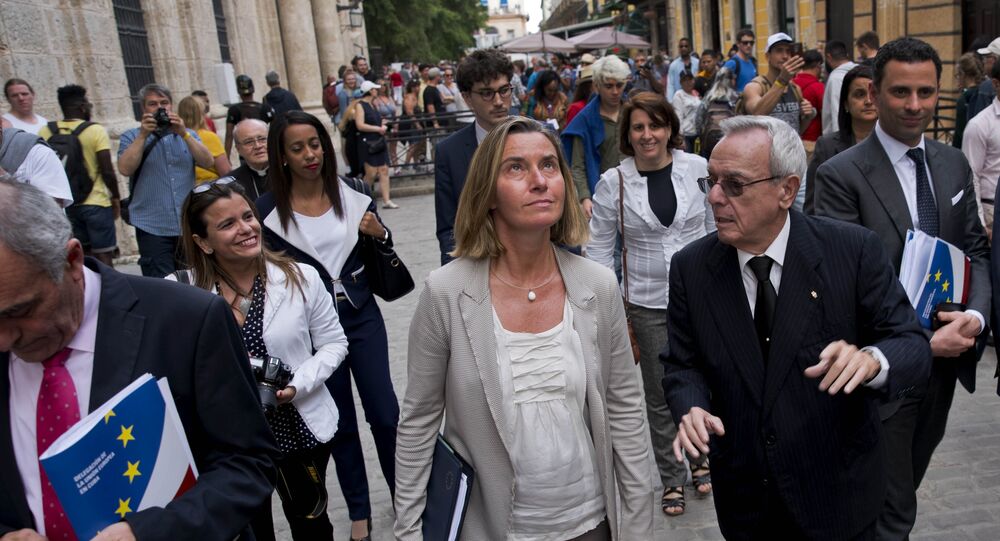 While the US has recently turned away from Cuba, the EU is pursuing a policy of rapprochement, as evidenced by the EU foreign policy chief's recent visit to the island. Professor Antonio Moreno of the University of Navarra told Radio Sputnik that the strengthening of relations will bring benefits to both Cuba and the EU.

Speaking to reporters on Thursday, Mogherini described Brussels as a "solid, reliable and predictable partner," which was interpreted as a reference to the unpredictable US President, Donald Trump. She also called the US blockade of Cuba "obsolete" and "illegal."

© REUTERS / Alexandre Meneghini
The EU 'Going at Loggerheads' With US Over Cuba – Analyst
Antonio Moreno, a professor of economics at the University of Navarra in Spain, told Radio Sputnik that the PDCA will herald an upturn in bilateral trade, as well as foreign direct investment from the EU to Cuba in areas such as tourism and agro-industry.

Sputnik: What is the big difference between the US and the EU stance on Cuba? Do you think that Europe is actually paying more attention to Cuba now that Trump has turned away from the Obama-era policies of greater engagement?

Professor Antonio Moreno: It definitely seems so. I think the Europeans feel like a door is opening in Cuba, given that the US policies are let's say, unpredictable. With respect to Cuba, they were more favorable under Obama, now they are less so under Trump, with all these restrictions and sanctions.

I think that the European Union is now in a situation where, in the context of Trump, Brexit, it's picking trade agreements with several partners. For example, a country like Spain has had many historical relations with Cuba and it seems like a very interesting country to strengthen both political and economic relations. And yes, I think that US-Cuba relations now, in a way, deviate Cuba trade and economic relations more toward the EU.

© REUTERS / Stringer
Cuba's Raul Castro Denies Using Sound Weapons Against US Diplomats
Sputnik: Cuba is facing a very important period of time, after Raul Castro steps down as the country's leader. What role to you see for the EU, in helping to facilitate the changes that could happen in Cuba and how do you see Europe's role in post-Castro Cuba?

Professor Antonio Moreno: let me say that I think it can be very beneficial for both sides, because Cuba can also export things to Europe and offer a lot of economic benefits. From the political perspective, it seems that there will be continuity in terms of the political, gradual opening. I think in that respect there will be more economic opening, but also as political relations strengthen, I think that this is also going to be beneficial for the institutions in Cuba.

I think the fact that you have stronger relations between the EU and Cuba and between Cuba and some other countries with, let's say, long-standing democratic traditions, is also going to bring benefits to Cuba.

That seems to be what will happen when Raul Castro steps down, it seems that, even though it's not completely sure, he is going to be succeeded by somebody who is actually going to put in place all these gradual reforms, doors opening.

The views expressed in this article are solely those of Antonio Moreno and do not necessarily reflect the official position of Sputnik.

Cuba and Haiti's Revolutionary Roots; Hatch to Retire in Utah