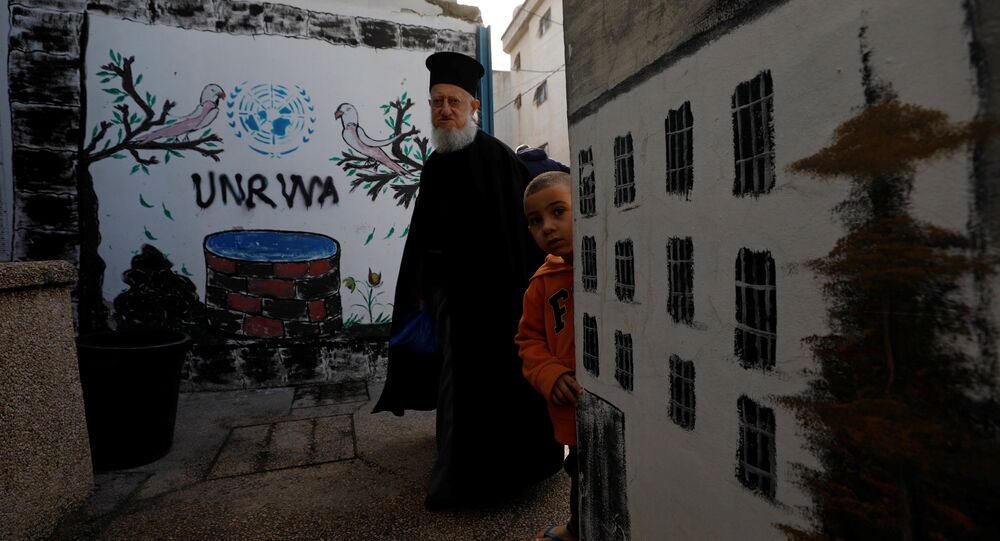 Commenting on US President Donald Trump's threats to cut off funding for the Palestinian Authority, Dr. Mazin Qumsiyeh, a professor at Bethlehem University, told Sputnik that Palestinians have never benefited from US financial aid.

Dr. Mazin Qumsiyeh, a professor at Bethlehem University and a Palestinian activist, recalled that the US has already decreased its aid contribution to the United Nations Relief and Works Agency for Palestine Refugees in the Near East (UNRWA), which he said stood at 290 million dollars and 250 million dollars in 2016 and 2017, respectively.

Qumsiyeh explained that the money helps provide two segments, with one, which is worth about 50 million dollars, related to Israeli security.

"It provides security for the Israeli state to remain an occupying state," he said, adding that another 100 million dollars are "infrastructure, environmental and educational funds that do not go to the Palestinian Authority or anything like that."

"It is spent by the US, primarily to help encourage the state of Israel to continue its occupying policy, an apartheid kind of system. For example, the US helps build roads that bypass Israeli settlements or build checkpoints for Israel," Qumsiyeh added.

According to him, the bottom line is that Washington actually helps Tel Aviv and provides US national interests instead of rendering aid to Palestinians, "so all the better that they cut off this aid."

Qumsiyeh noted that President Trump is "very serious" about the move to cut funding for Palestine but that the US President hadn't thought it out.

"This is a President who thinks he can rule by fear and decree and who doesn't consult knowledgeable experts, even those [skilled] in empire building. In a way, this is good for us [because] it is accelerating the decline of the US empire," he pointed out.

When asked about whether Palestine would return to the negotiating table, Qumsiyeh said that "there can never be negotiations between the colonizers and the colonized."

He stressed that Palestinian authorities should stop cooperating with "people like Donald Trump" and understand that their real allies are "mostly in the East not in the West."

On January 2, Trump wrote on his Twitter page that Palestine was "no longer willing to talk peace" with Israel, and questioned the issue of giving "hundreds of millions" in aid payments to Palestine to force the warring parties to resume negotiations.

Earlier, US Ambassador to the United Nations Nikki Haley warned that the US would cut off funding to the UN’s agency for Palestinian refugees unless the Palestinian Authority returned to the negotiating table.

UNRWA, for its part, released a statement saying that they had not been informed about any change in funding.

The views expressed in this article are solely those of Mazin Qumsiyeh and do not necessarily reflect the official position of Sputnik.